Following a busy transfer window, Juventus will now be looking to revive their form heading into the second half of the season. The Old Lady have had a disappointing first half of the campaign as they failed to mount a title charge and found themselves struggling to remain among the top four. The transfer window saw the arrival of Dusan Vlahovic and Denis Zakaria, while Dejan Kulusevski and Rodrigo Bentancur have departed. Recent reports have claimed that Juventus hierarchy will now focus their attention on contract renewals, and the Columbian international Juan Cuadrado is said to be one of the first players who are close to a contract extension.

Since joining the Bianconeri in 2015, Cuadrado has found a regular place in the Old Lady’s lineup. He has adapted well to the demands of multiple managers and remains a prominent player despite reaching the back-end of his career. Although he has suffered few dips in his form over the past couple of seasons, the 33-year-old remains one of the best creators in the Bianconeri’s lineup and has proven decisive during his time at the club.

Let’s take a look at his stats from the Champions League to gauge his best position. 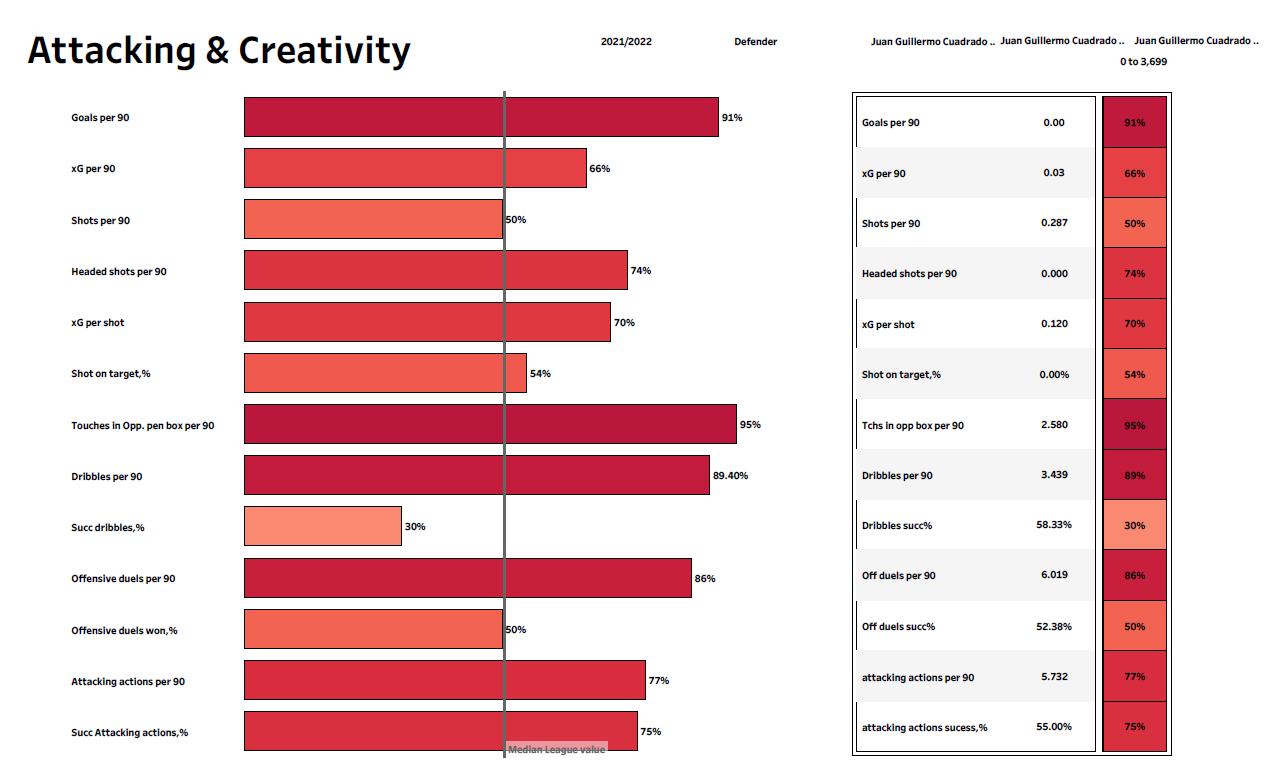 Cuadrado has made five appearances in the Champions League group stages. In the above viz., we can see that he has ranked highly in terms of many attacking metrics, with the majority of his stats surpassing the league median. His most notable stats are touches in the opponent penalty box per 90, dribbles per 90, and offensive duels per 90. The Columbian has averaged more than five attacking actions per match with a success rate of 55%. Although he has not hit his form from the previous seasons, nonetheless, Cuadrado has been effective for the Bianconeri. He is known for his dribbling ability and his movement off the ball. His awareness allows him to combine well with his teammates down the right flank. 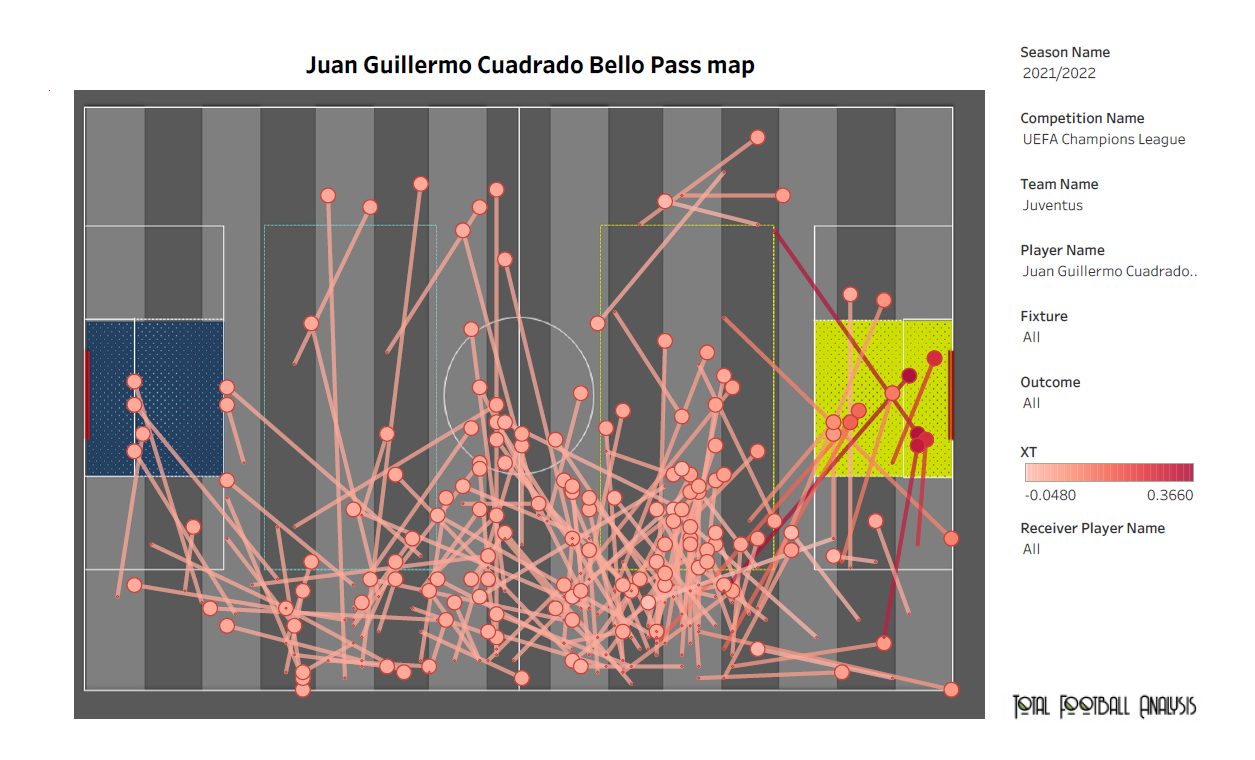 In the above viz., we can see the areas of the pitch where Cuadrado has delivered his wide array of passes. Most of his passes have been delivered from the half-spaces down the right-wing. Cuadrado drifts up and down the right-wing and tends to move in-field to combine with the central-midfielders. The Colombian is influential for his side during the build-up as he moves into the pockets of spaces, allowing his teammates to find him. He can then progress the ball with his dribbling or find a teammate in threatening areas near the opposition box. 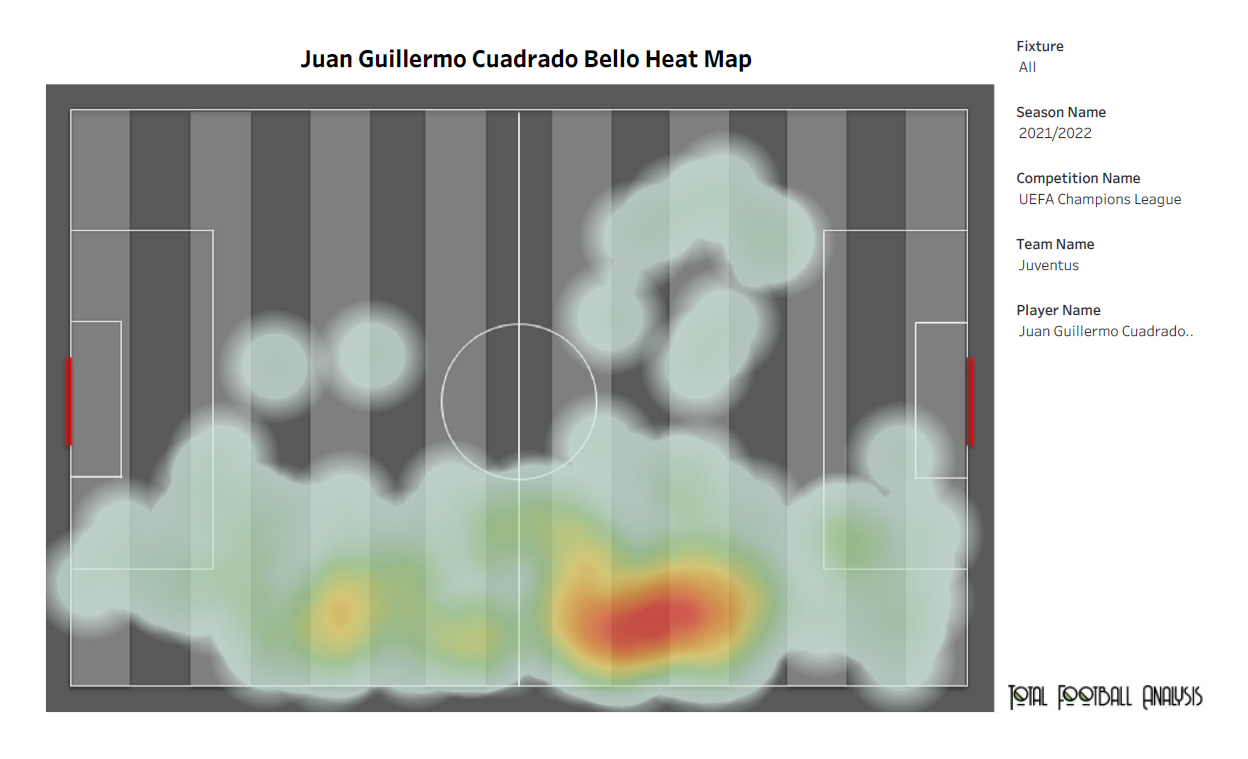 We can see his movement on the right wing and the areas where he is most active. Cuadrado has mostly been found on the right wing in the opponent’s half. He has been deployed as a right-back as well as a right midfielder by Allegri. The Columbian has suffered ups and downs in his form this season, as he has looked solid in some matches at the right-back position while he has looked vulnerable in some others.

With Danilo now available for the right-back position after a lay-off due to an injury and Federico Chiesa out for the remainder of the season, Allegri could deploy Cuadrado in an advanced position. Although he has displayed his versatility, the Columbian could prove effective in a more advanced position i.e., as a right-midfielder or a winger.