Since joining the Old Lady at the start of the 2020-21 season, Weston McKennie has slowly established himself as the team’s rising star. He has performed impressively enough to have gained the admiration from former Juventus manager Antonio Conte, who was reportedly interested in signing the American international for Tottenham. Juventus hierarchy, however, considers McKennie an important part of the team and are said to have rejected multiple approaches for the American.

The 23-year-old midfielder has put on impressive displays for the Bianconeri this season. He has made 17 appearances in Serie A, scoring three goals. In addition, the midfielder has featured in five games in the Champions League group stages as well. Since the start of the year, McKennie has been one of Juventus’ standout performers. Amidst the Old Lady’s tough round of fixtures, in which they have faced Napoli, Roma, Inter, and AC Milan, McKennie has found himself in the starting line-up regularly. It has been reported that the American international has gotten used to Allegri’s tactics and is firmly in his manager’s plans for the season as Juventus look to improve their standing in the league.

At one point during the season, the Bianconeri were struggling to put on a string of results and dropped to the eighth position in the league. Although they are still underperforming in comparison to the previous seasons, Juventus are now back in contention for the top four, with 12 wins, six draws, and five losses in 23 league games. McKennie’s current performances in the midfield for Juve have inspired confidence among fans, and he looks set to continue his role in Allegri’s midfield.

Let’s take a look at his stats to gauge if he is ready for a breakthrough in the Old Lady’s midfield. 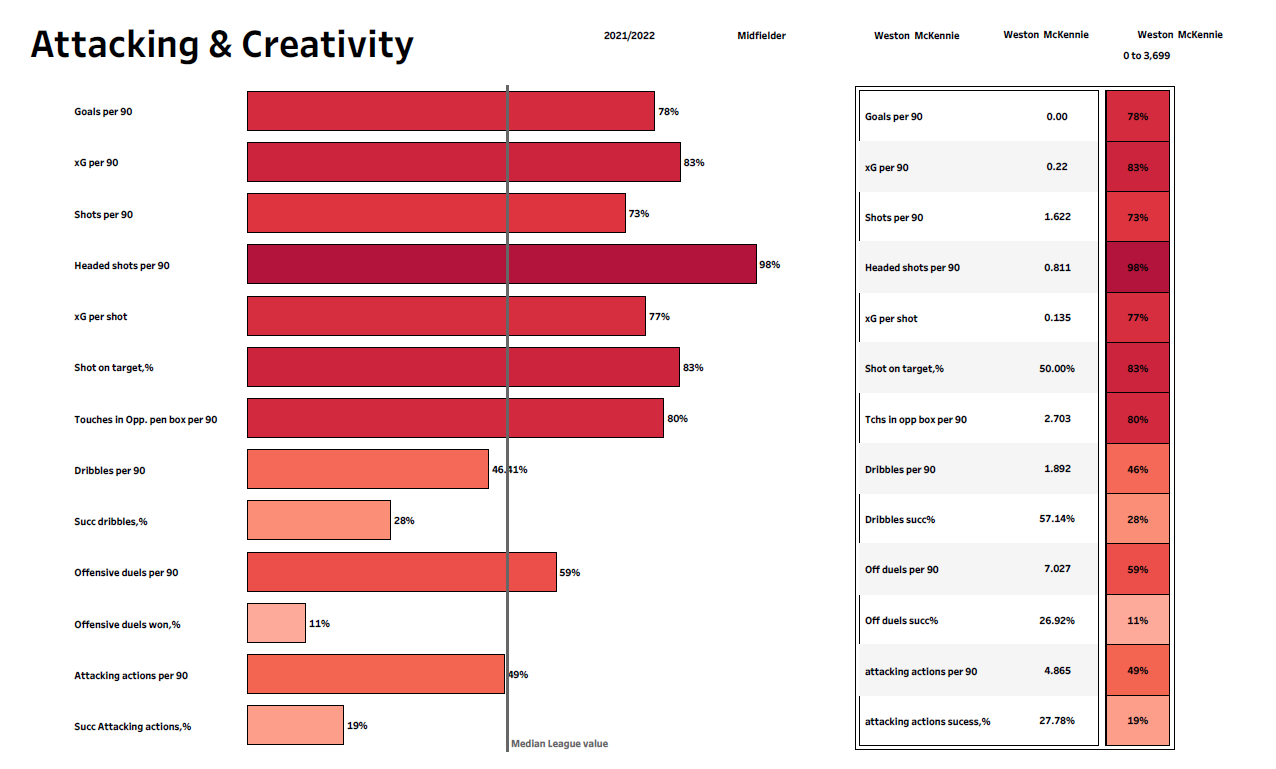 In the above viz., we can see McKennie’s attacking and creativity stats. Most of his stats surpass the league median value. The American international has been especially impressive in terms of xG per 90, headed shots per 90, shot accuracy and touches in the opposition’s penalty box per 90. McKennie possesses a strong build, and he is strong in a challenge. The American has displayed his ability to break up the play before the opposition attack can take place. He is constantly on the move and can adjust his position to his side’s advantage. 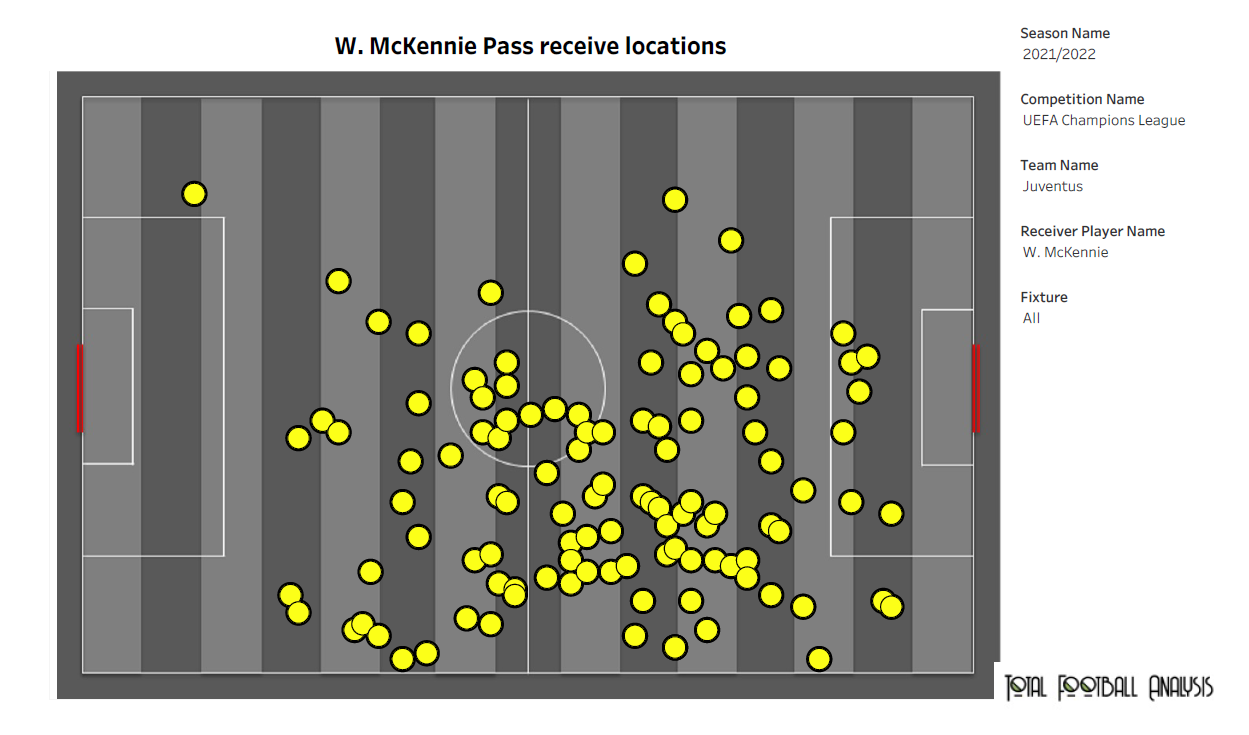 His ‘pass receive location’ highlights the areas of the pitch where he drops to receive his passes. We can see that he has dropped in multiple areas of the pitch in his half and the opponent’s half to receive the passes from his teammates. Despite his young age, McKennie displays patience with the ball. His patience and intelligence with the ball allow him to make impressive movements on the pitch. In addition, the 23-year-old is strong in the aerial duels and has a decent success rate in aerial duels. 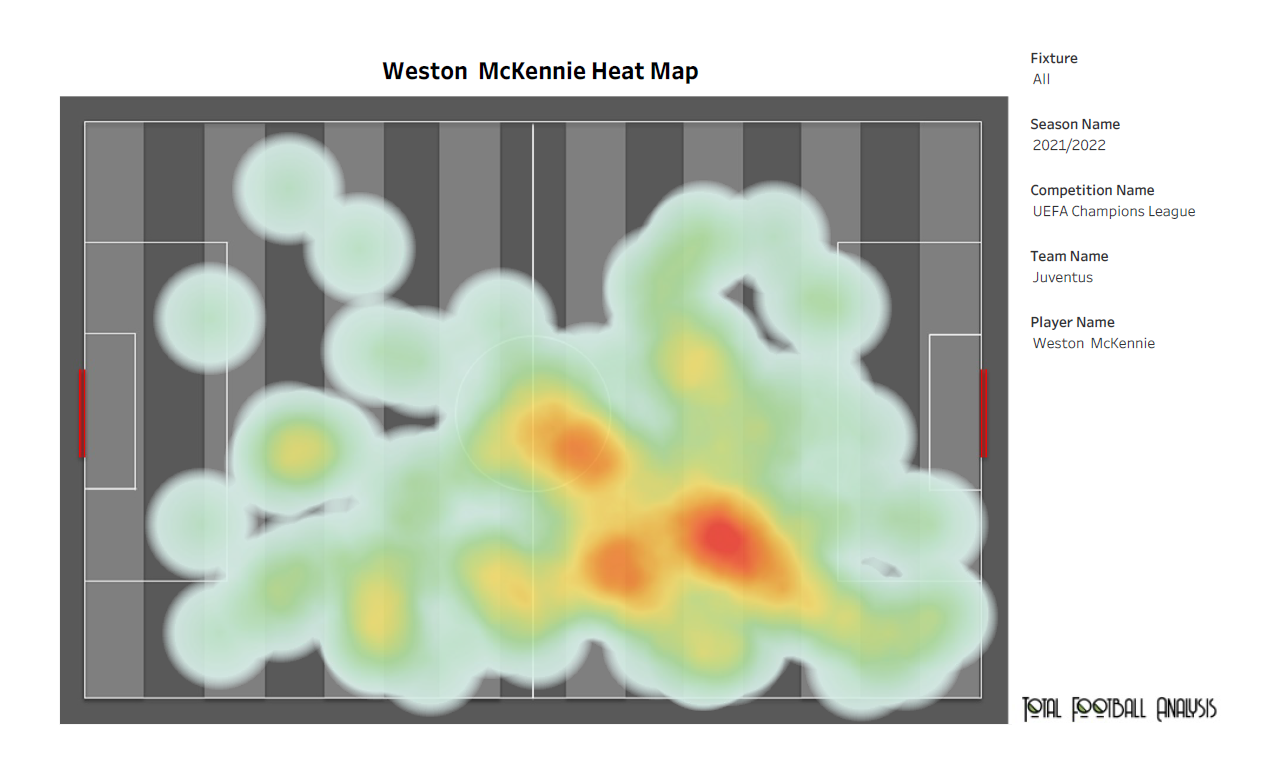 In the above viz., we can see the areas of the pitch where McKennie is most active. In the previous season, he was deployed in multiple positions in the midfield, even as a holding midfielder, due to his defensive work rate. Although under Aleggri, McKennie has been pushed higher up the field, which provides Juventus with an extra man in the attack. McKennie is a threat to the opposition defense and ranks highly in terms of key passes and expected assists. In addition, he displays an eye for a goal.

While still 23, McKennie has already displayed several glimpses of his ability. He possesses maturity on the pitch far beyond his age. His recent performances and stats indicate that the midfielder is ready for a breakthrough in Bianconeri’s midfield.