Following a slow start to the season, Federico Bernardeschi has finally begun to show signs of consistency. The Italian international had a rough start to the season and was unable to feature regularly in Allegri’s line-up. Although, since the end of last year, Bernardeschi has been in fine form, ending his long-overdue goal drought in the Serie A in the match against Cagliari. The winger has carried his fine form to the start of the new year and has managed to feature in three out of four games in the league for the Bianconeri.

Since joining Juventus from Fiorentina in 2017, the 27-year-old winger has failed to display consistency, a scenario that has been a cause for concern for many Juventus fans. His patches of brilliant performances are often followed by his inability to impact the games. Despite his struggles in the previous seasons, Bernardeschi has now seemed to gain Allegri’s faith. The winger has been deployed in multiple positions by his manager and has started to deliver. He was especially impressive in Juventus’ group stage matches in the Champions League. Bernardeschi started in four out of six group stage matches and was one of the most creative players for the Old Lady.

Bernardeschi’s recent performances have led many fans and pundits to believe that the winger could play a big role in the Bianconeri’s charge in the Round of 16 and their contention for the top-four spot in the Seria A, as they are still one point behind Atalanta in the fifth place.

Let’s take a look at his stats from the Champions League to gauge whether the Italian international could hit top gear in the second half of the season. 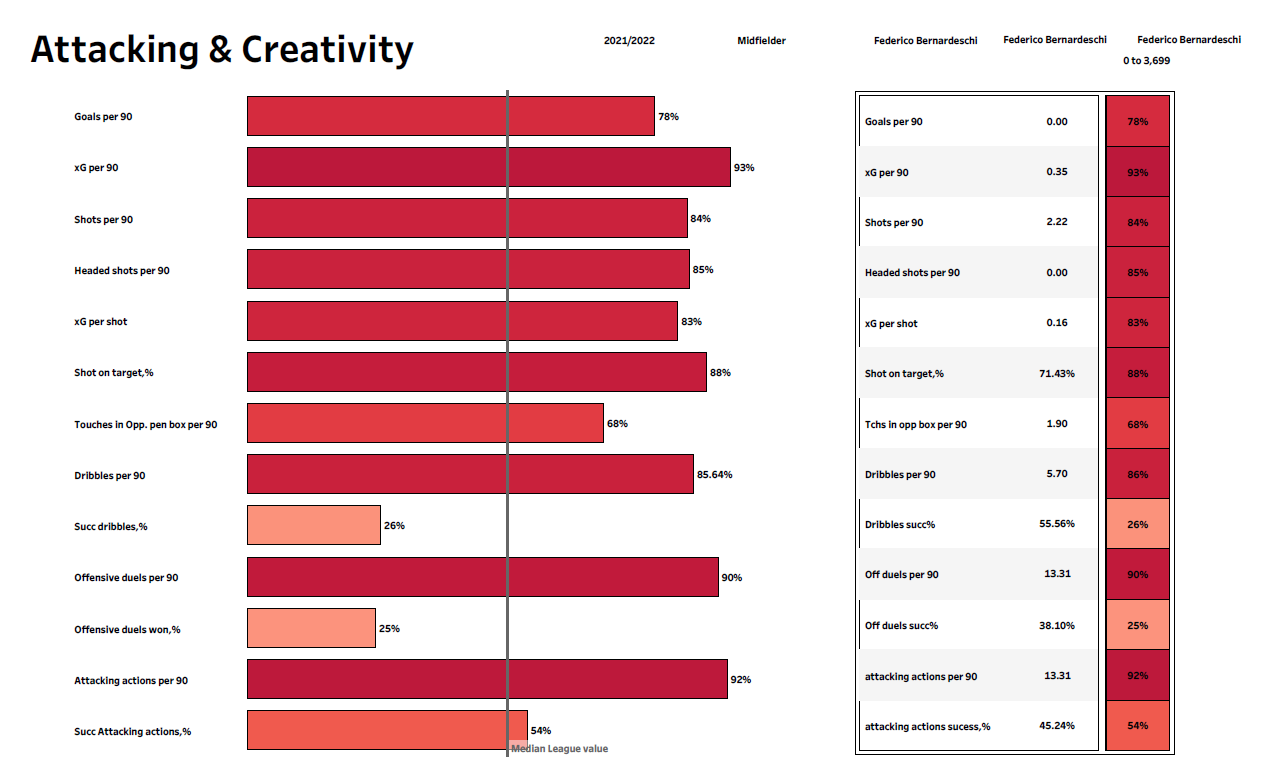 In the above viz., we can see Bernardeschi’s attacking and creativity stats in the Champions League. He ranks highly in terms of the majority of the stats, with his most notable stats being xG per 90, shot accuracy, offensive duels per 90, and attacking actions per 90. Bernardeschi is known for his impressive agility and dribbling skills. He is strong in one-on-one situations and can take on opponents with his movement and speed. The winger is strong under pressure and challenges and can hold up the ball during the counterattacks. 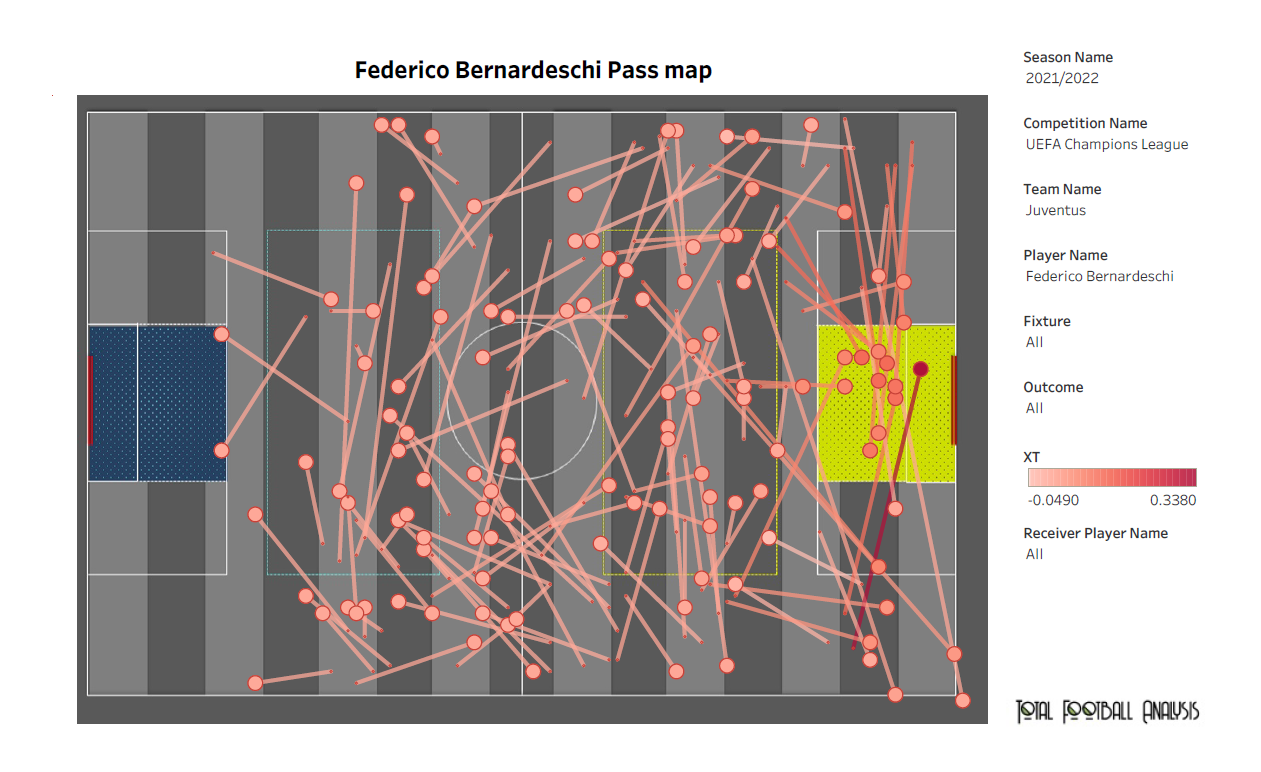 His pass map highlights the areas of the pitch where he has delivered his passes. Bernardeschi put on impressive displays in all four of the matches that he appeared in the group stages. The Old Lady came out winners in all of the matches that he featured in. The winger was one of the most standout players and leads the team in the Champions League in terms of key passes and expected assists. In the above viz., we can see that he has been involved in passes all over the pitch. 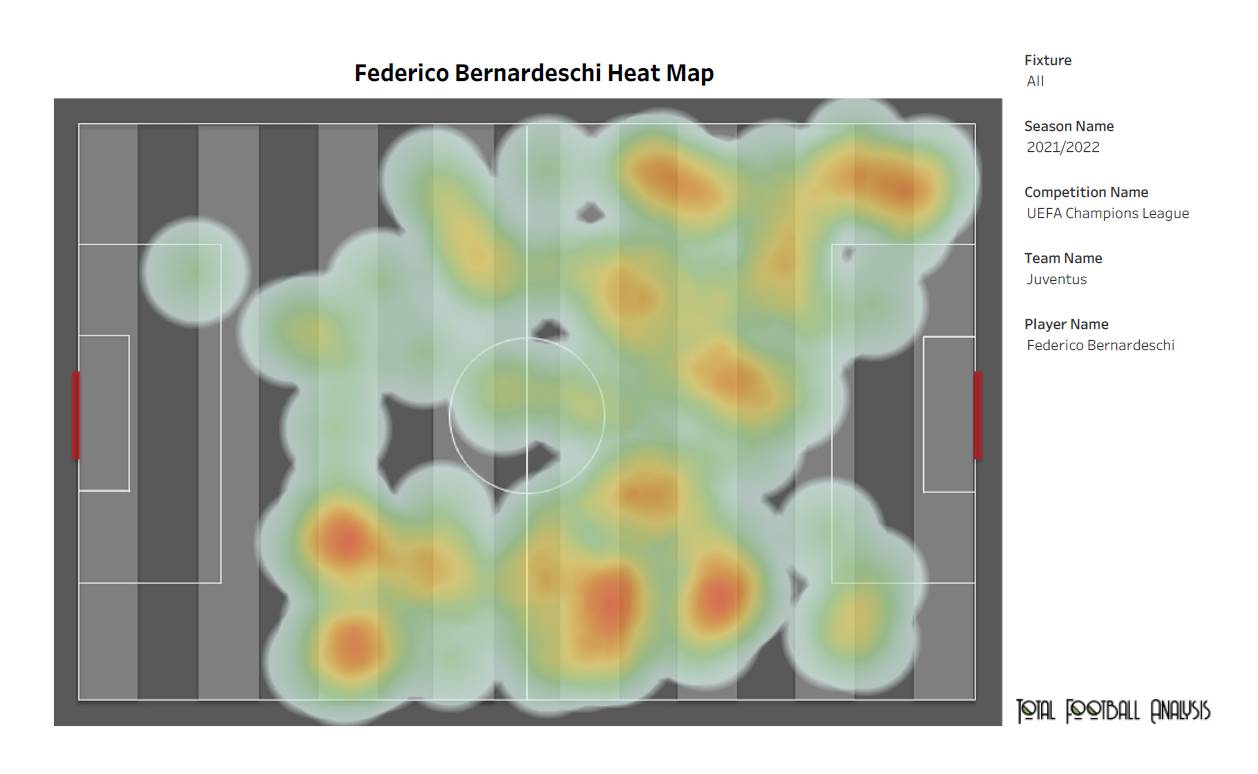 The above heat map displays the locations on the pitch where he has been most active. This season, Bernardeschi has been deployed in multiple roles for the Bianconeri as Allegri has often tinkered with the formation. He has featured as a winger in Allegri’s 4-2-3-1/4-3-3 system and on the left side of the midfield in the 4-4-2 formation. We can see multiple red zones in the above viz., which further highlights his mobility on the pitch. His constant movement on the pitch makes it harder for his marker to keep track of him. 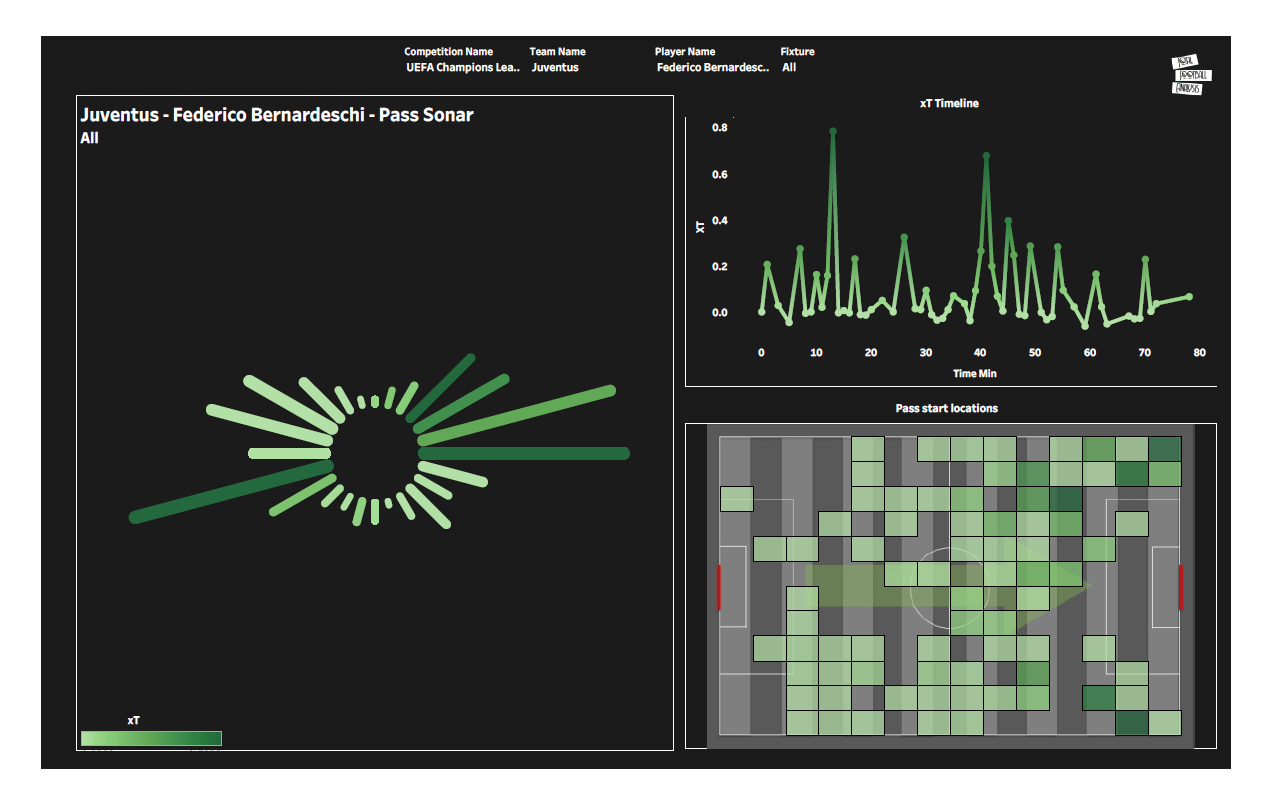 With Federico Chiesa ruled out for the rest of the season, Bernardeschi could get the opportunity to step up. If he continues his consistent performances, the winger is sure to hit top gear for the Old Lady in the second half of the season.