It was reported back in December that Arsenal would be looking to sell Pierre-Emerick Aubameyang in January. The former club captain has fallen out of favor with Mikel Arteta after an alleged disciplinary breach. Since he was removed from the captaincy in December, many clubs have been linked with a move for the Gabonese striker. Reportedly, Juventus are also among the host of clubs interested in securing the services of Aubameyang.

The Bianconeri have been struggling to score goals this campaign and are reportedly in search of attacking reinforcements. Despite having some of the best attackers in Serie A, the Old Lady have fallen short in front of the goal. With several attackers already linked with the club, Juventus are reportedly looking for a forward who can be brought in for a loan deal and someone who can slot into Allegri’s forward line. It has been claimed that Allegri is a fan of the 32-year-old Aubameyang and could utilize his experience in front of the goal.

According to reports, the Old Lady are looking for players who are in an unfavorable situation at their current club or are out of contract at the end of the season. Aubameyang falls into the former category, with Bianconeri possibly going in for a loan deal for the forward. The former Borussia Dortmund striker joined Arsenal in 2018. Since then, he has made 128 appearances in the Premier League, scoring 68 goals and registering a further 16 assists. This season, Aubameyang has made 14 appearances in the league, scoring four times and registering one assist.

Let’s take a look at his stats to gauge whether he could provide an attacking spark to Allegri’s frontline. 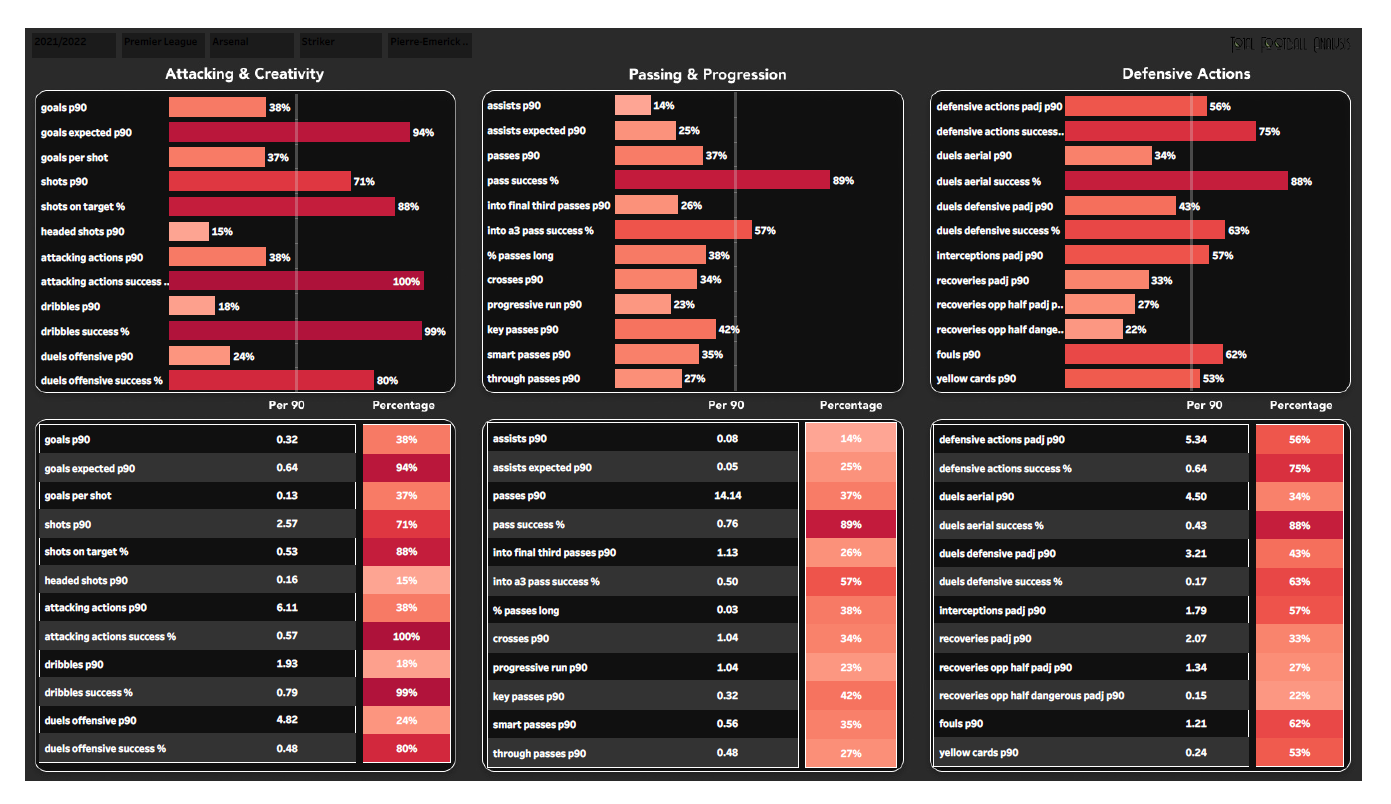 In the above viz., we can see an overview of Aubameyang’s attacking & creativity, passing & progression, and defensive stats in the Premier League this season. While Aubameyang’s form has declined in the past two seasons, nevertheless he remains an attacking threat near the opposition box, as indicated by his attacking & creativity stats above. Despite being limited to 14 appearances, the majority of his attacking stats surpass the league median value. His most notable stats this season are xG per 90 and shot accuracy. Aubameyang is a threatening attacker in the final third. His explosive pace makes him a constant threat to the opposition defenders. He is a striker who is adept at sniffing out opportunities in the opposition box and often finds himself finishing off moves from a close distance or picking up the pieces after a deflection. 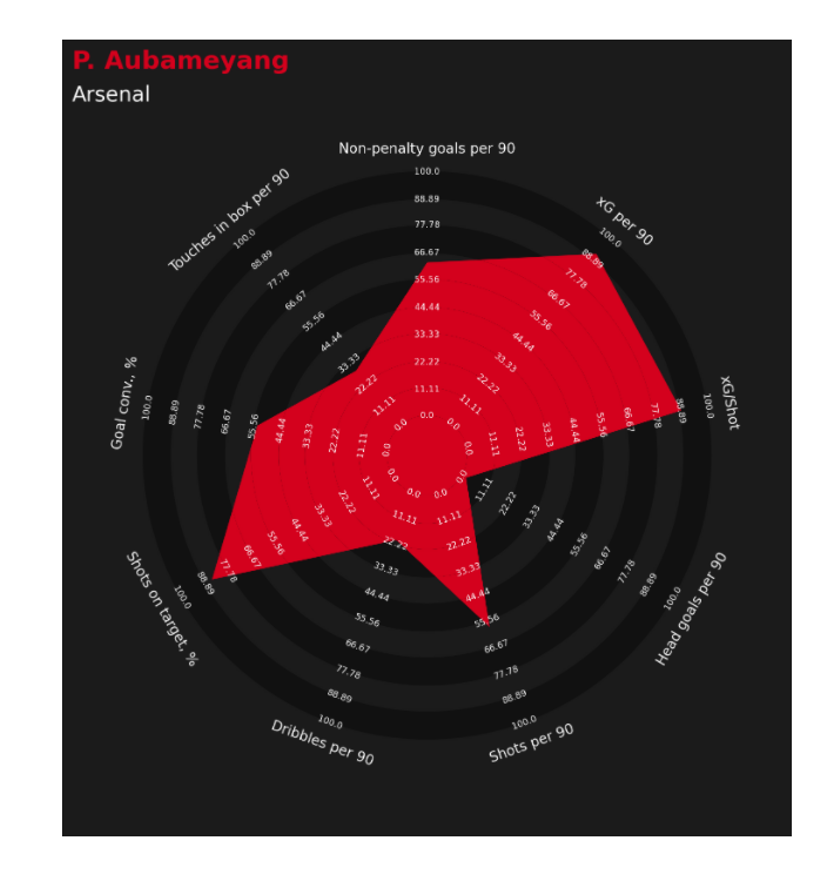 The above viz. further highlights the Gabonese striker’s threat in front of the goal. We can see that he ranks highly in terms of xG per 90, xG per shot, and shot accuracy. Although at Dortmund, Aubameyang was rarely involved in the build-up play, he has displayed improvement in that aspect during his time at Arsenal. His quick pace and energy make him dangerous during the counter-attacks. In addition, he possesses the ability to get past the defenders with quick dribbles. 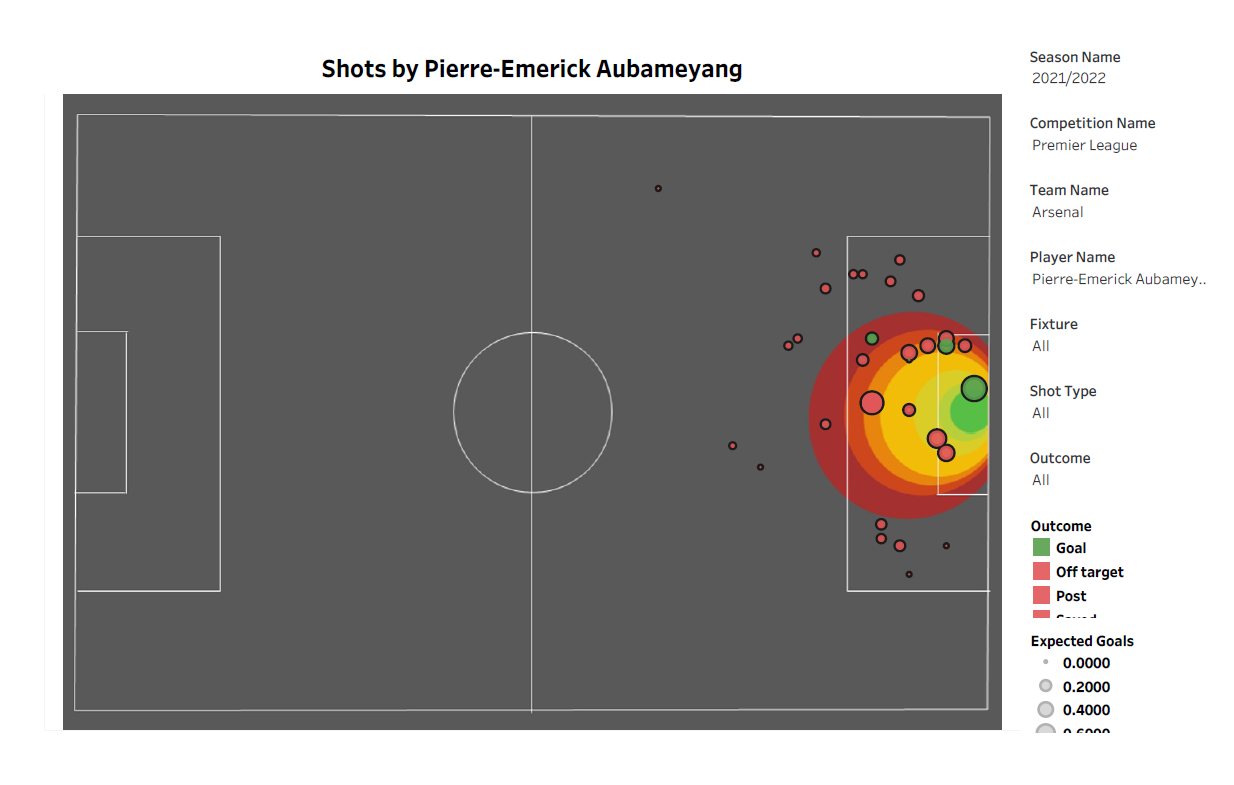 In the above shot map, we can see the shots taken and goals scored by Aubameyang this season. The Gabonese striker excels in finding opportunities to shoot from inside the box and can often get into threatening areas in front of the goal. The majority of his shots have been taken from inside the opposition’s box, while most of his goals have also been scored from inside the box. Allegri could deploy him as a centre-forward or on either side of a striker. In both roles, he can cut inside and move into the box. 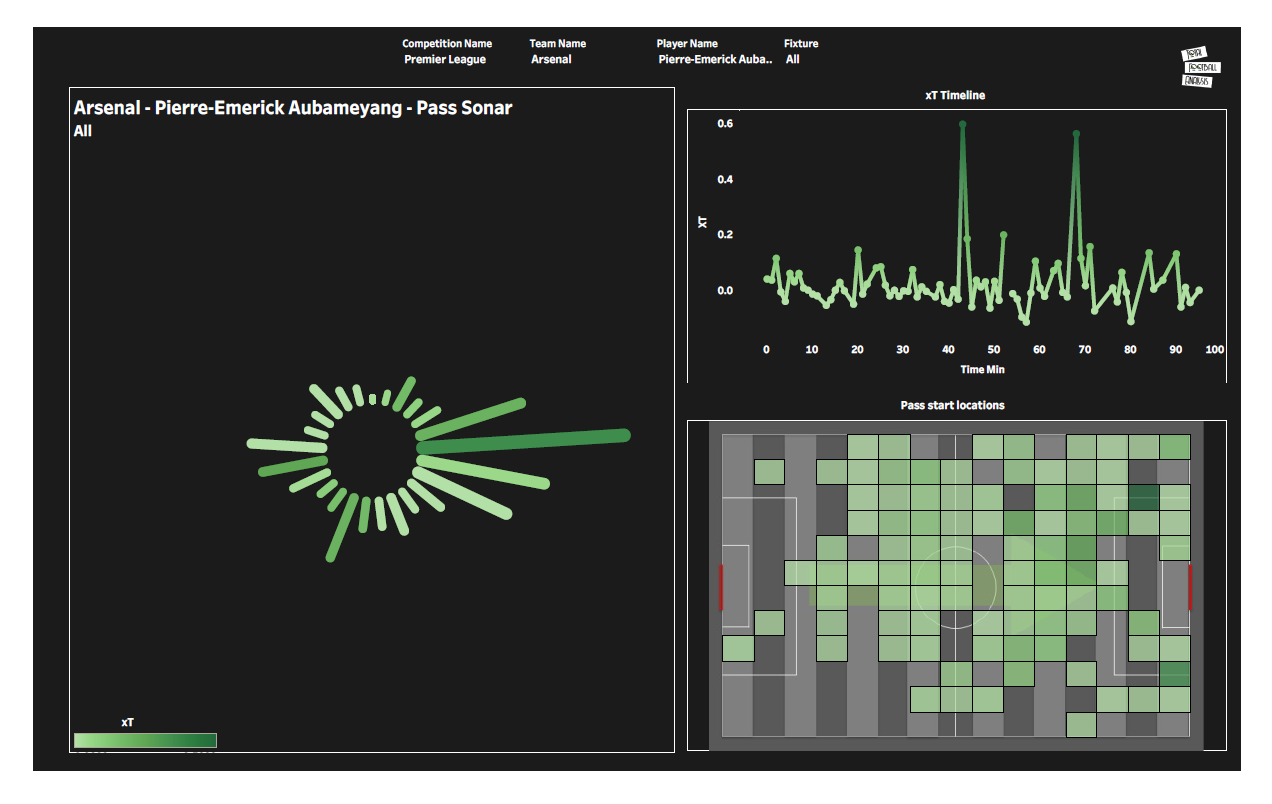 Pass Sonar outlines the direction of pass that a player or a team tends to make and indicates a player’s influence on the movement of the ball. In addition, it shows the frequency distribution of different passing angles for an individual player, as well as the typical length of pass attempts. Aubameyang’s pass sonar indicates that he provides a sense of direction for his passes. We can see from the pass start location the areas of the pitch where he is most threatening with his passes.

With Chiesa now out for the season, Allegri could use reinforcement in his frontline. While Aubameyang’s overall form has declined in the last two seasons, nevertheless, he remains a goal threat who is adept at finding scoring opportunities inside the opposition box, something Juventus have been lacking this season. A loan deal could work out for the Bianconeri.