For over six seasons now, Alex Sandro’s name has been synonymous with the left-back position at Juventus. The Brazilian has been a regular feature in the Old Lady’s backline since taking over the role from Patrice Evra in the 2015-16 season. Following his arrival at Juventus, Sandro has made 255 appearances across all competitions, scoring 14 goals and adding a further 30 assists. He had a prominent role in the Bianconeri’s domestic dominance, which saw them win the Scudetto for five successive seasons from 2015-16 to 2019-20. In addition, the Brazilian has won four Italian cups and two Supercoppa Italiana with the Old Lady.

Sandro started his career with the Brazilian side, Atletico Paranaense, making his debut for the senior team in 2008. He moved to FC Maldonado in Uruguay, although he was loaned to Santos in 2010, where he made 30 appearances in the domestic league. Sandro then went on to join Porto in 2011, making 87 appearances in Primeira Liga before he was signed by the Bianconeri in 2015.

With the Brazilian’s current deal set to expire next year, reports of Juventus lining up a replacement for Sandro have started to surface. Many pundits and fans alike, have noticed a decline in his form as of late. Nonetheless, he has been counted upon by Allegri this season, featuring in 17 games in the Serie A and six in the Champions League. While he is still a regular starter for Juventus in most games, the last few weeks before the winter break saw Allegri deploy Luca Pellegrini in the role of left-back. The role of a modern full-back requires extensive movement up and down the flank, and at the age of 30, Sandro cannot be expected to continue his energetic performances that the Bianconeri fans have gotten used to.

Let’s analyze his stats from the Champions League this season to gauge whether he is underperforming for the Old Lady. 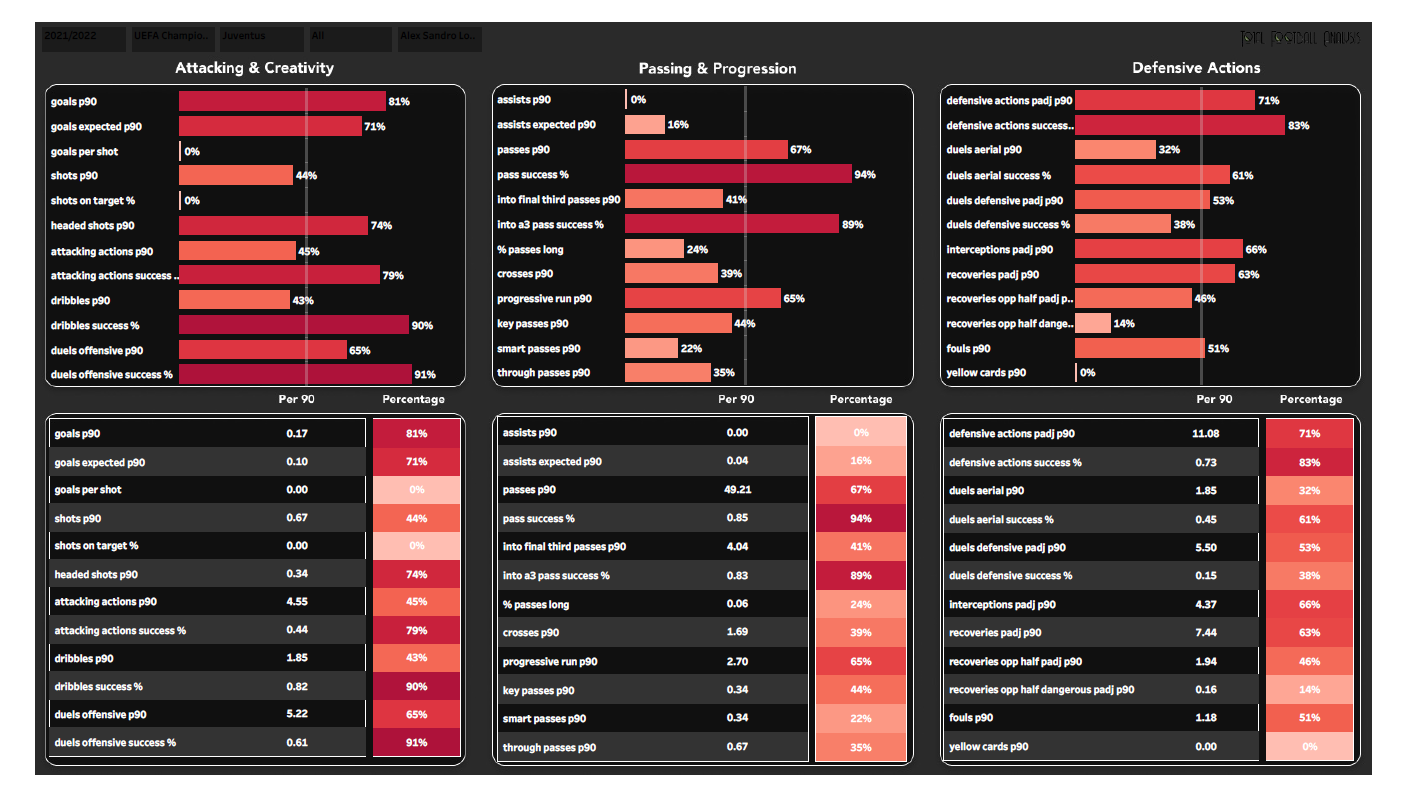 The above chart presents an overview of Sandro’s attacking and defensive performances in his six appearances in the Champions League. While most of his stats surpass the league median value, Sandro’s overall ability to impact the games with his attacking output has declined this season. In the previous seasons, Sandro demonstrated his attacking nature frequently and was often able influence the game using his brilliant crossing ability, dribbling technique and speed, drifting into threatening areas in the opponent’s half. His passing and progression have also declined this season, as seen in the above viz. Defensively though, the Brazilian has remained more or less solid, barring in 0-4 defeat against Chelsea where he lost possession frequently and struggled to cope up against an outstanding Reece James. 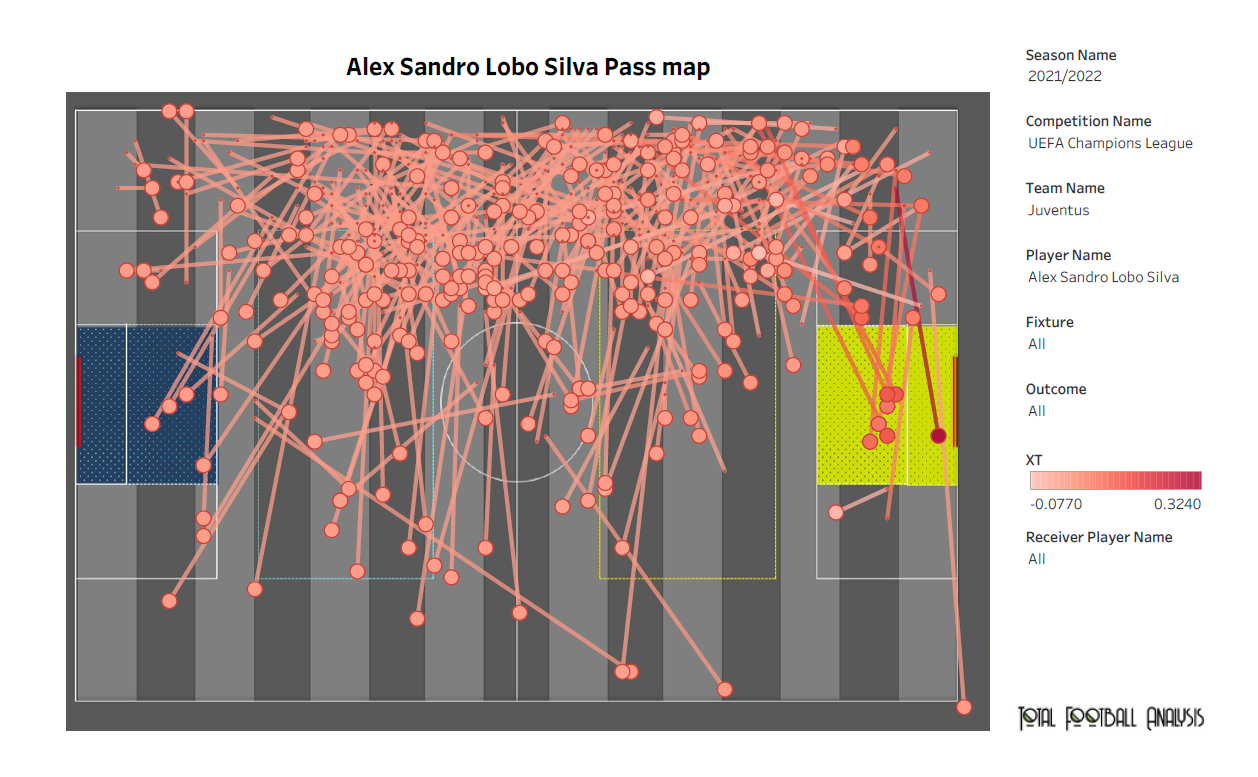 Sandro’s pass map displays the areas where he has delivered his various passes and crosses. Compared to the previous seasons, his cross accuracy and key passes have declined. The darker red shade indicates a more threatening cross. It is evident from the pass map that Sandro’s ability to influence the game with threatening crosses has declined. 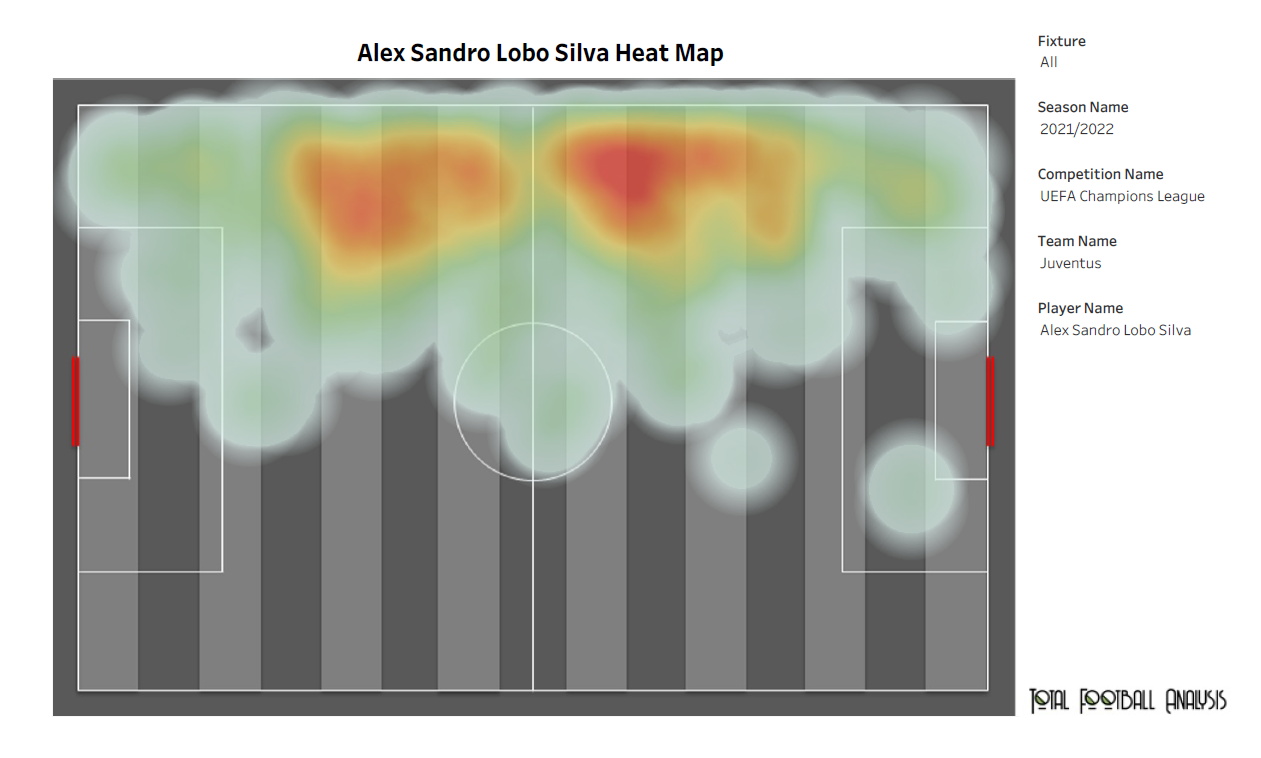 His heat map displays the location where Sandro is most engaged on the field. In the previous seasons, the Brazilian demonstrated explosive pace to track up and down the left flank, which allowed him to cover the ground when he was caught out of position. However, in recent seasons, Sandro’s speed and tracking ability has declined slightly. Although, his overall work rate remains impressive. 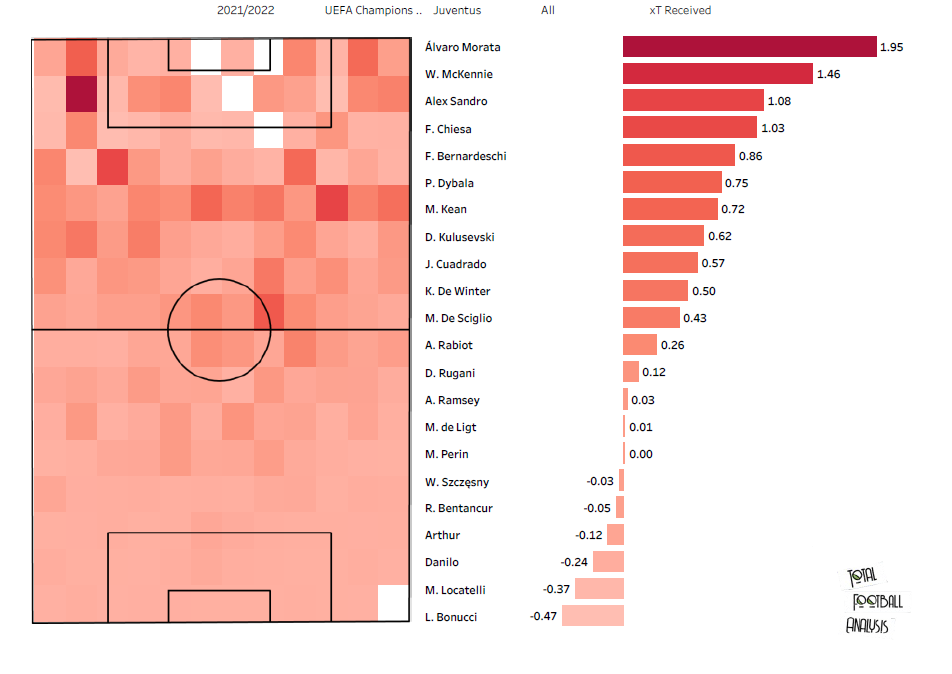 Based on Sandro’s overall stats, it is clear that the Brazilian is not performing at the level that the Bianconeri fans have gotten used to. Now at the back end of his career, at the age of 30, his speed, tracking ability, and crossing are not what they were in the previous seasons. Although he is performing below his level, he has still managed to put decent performances for the Old Lady this season.