For close to a decade now, Leonardo Bonucci has been a mainstay defender and an on-pitch leader for both club and country. Barring a spell at AC Milan, the Italian defender has been ever-present at the heart of Juventus’s defense, winning 17 honors during the two spells at the club. He was one of the main men behind Italy’s triumphant run at the Euro 2020.

Going into the season, Bonucci was supportive of Juventus hierarchy’s decision to re-appoint Allegri as the head coach, stating that it was the right choice. Although things have not gone as planned for Juventus or Bonucci, as the Italian giants have had a disappointing start to the Serie A season. Going into the winter break, the Old Lady find themselves at the fifth spot in the league, with ten wins, four draws, and five losses in 19 matches.

While they have had a slow start to the season, there have been signs of improvement in their recent games as they are undefeated in their previous five fixtures in the league, grabbing 12 points out of the available 15. Although their league form has left much to be desired, Juventus have qualified for the knockout round of the Champions League as Group H winners. Bonucci has been counted upon by Allegri and has featured regularly in the heart of Juventus’ defense in both Serie A and the Champions League. He has made 15 appearances in the league and has been involved in all six of his side’s group stage matches.

Following the conclusion of the Champions League group stage, the Italian defender was measured in his opinion, stating that other European giants such as Bayern Munich, Chelsea, Real Madrid, and Liverpool are in better shape than Juventus. However, he insisted that his side have to reach the quarter-finals of the Champions League regardless of the opponent.

Let’s dive into his stats from the Champions League this season to gauge whether the veteran defender can continue to perform in Allegri’s backline. 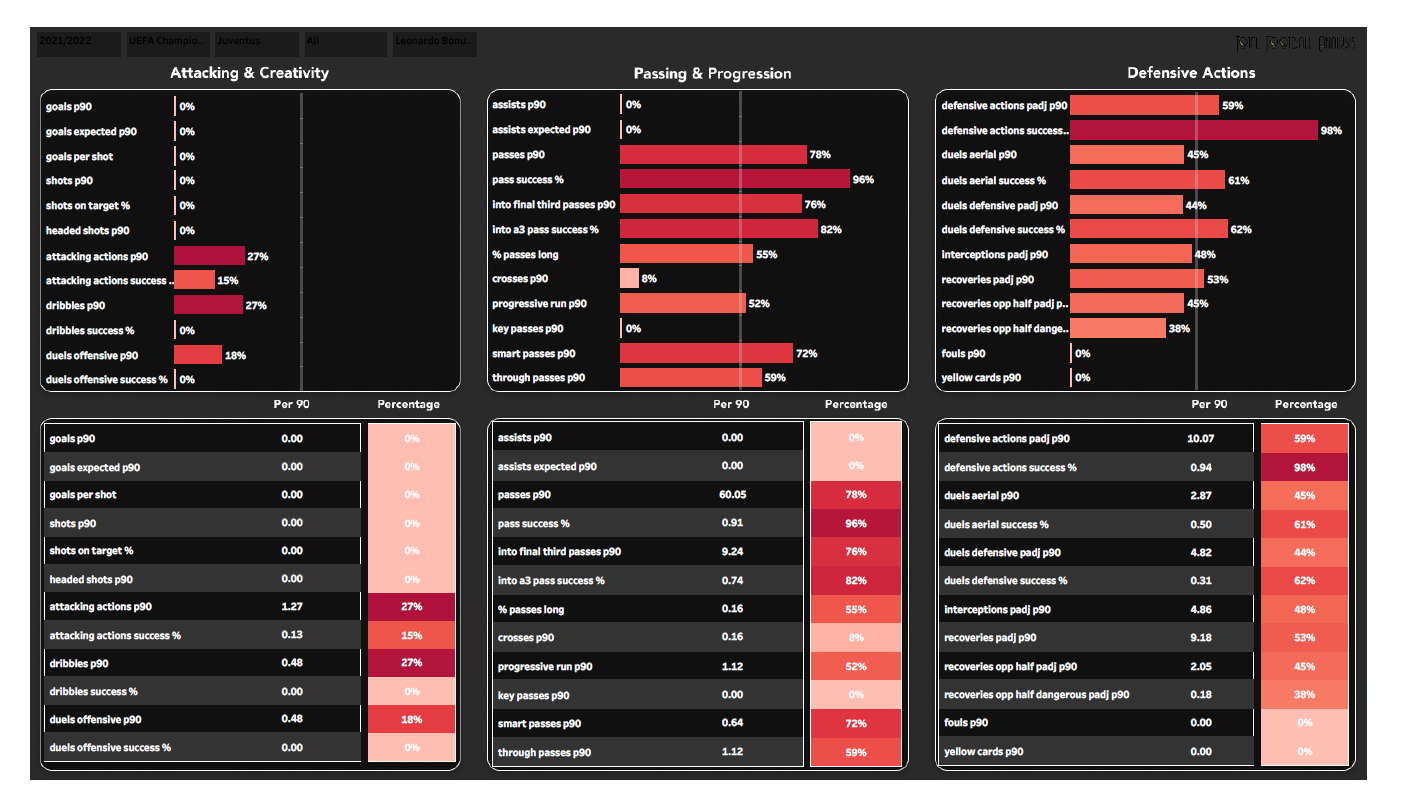 While his defensive stats in the Champions League are far from being among the best and are below his standards, Bonucci’s form has nevertheless has remained decent. Many of his stats are above the league median value, with the most notable being successful defensive action. Although his speed has declined in recent years, Bonucci compensates for that by utilizing his reading of the game and his defensive anticipation. Bonucci possesses brilliant tactical understanding, awareness and passing ability. His passing ability is further highlighted by his passing and progression stats in the above chart. He has averaged approximately 60 passes per match with an impressive success rate of 96%. 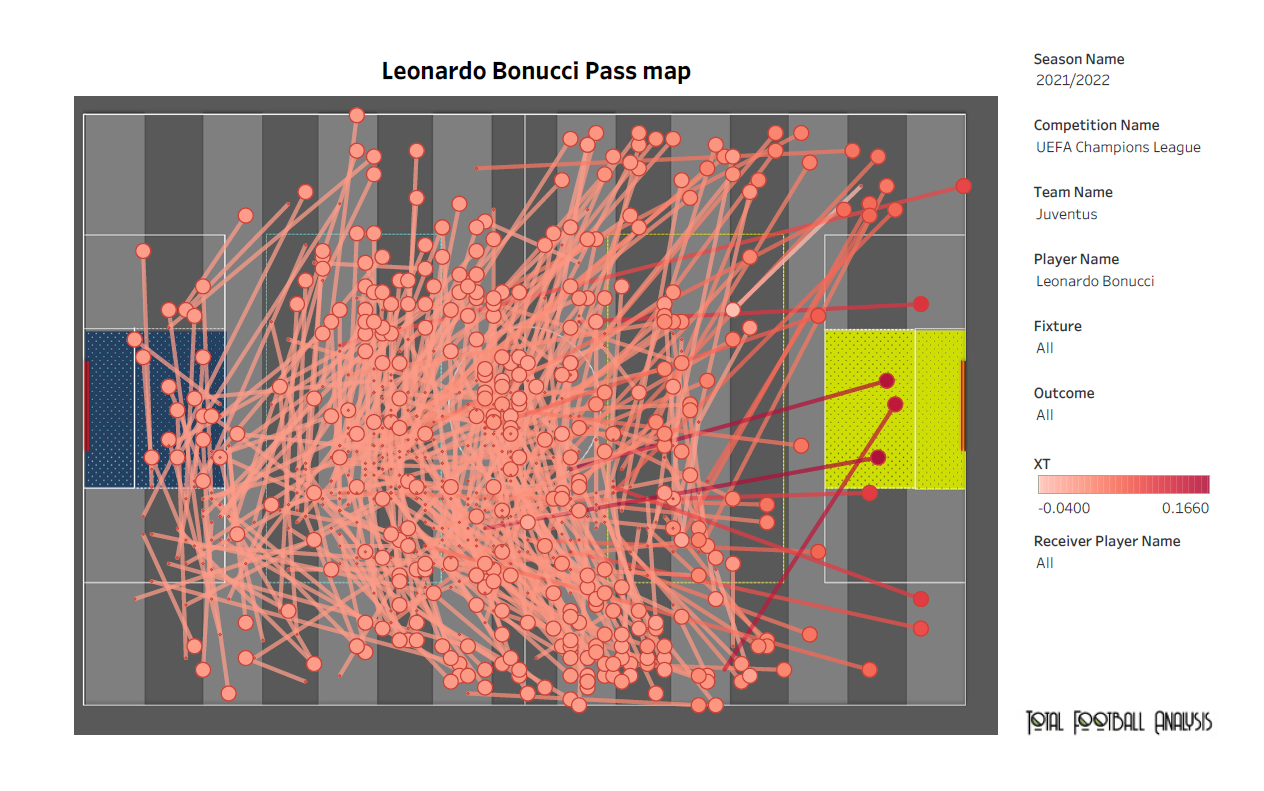 Bonucci’s pass map indicates the wide array of passes that he has delivered. For many seasons now, Bonucci has played a crucial role in helping his side build from the back. He is assured in possession and can receive passes in multiple locations on the pitch. Bonucci’s ability to receive passes in tight spaces helps his side break down the opposition press and is a valuable asset for Juventus’ build-up play. His long diagonal balls from the middle of the pitch near the opposition’s box carry a high threat. 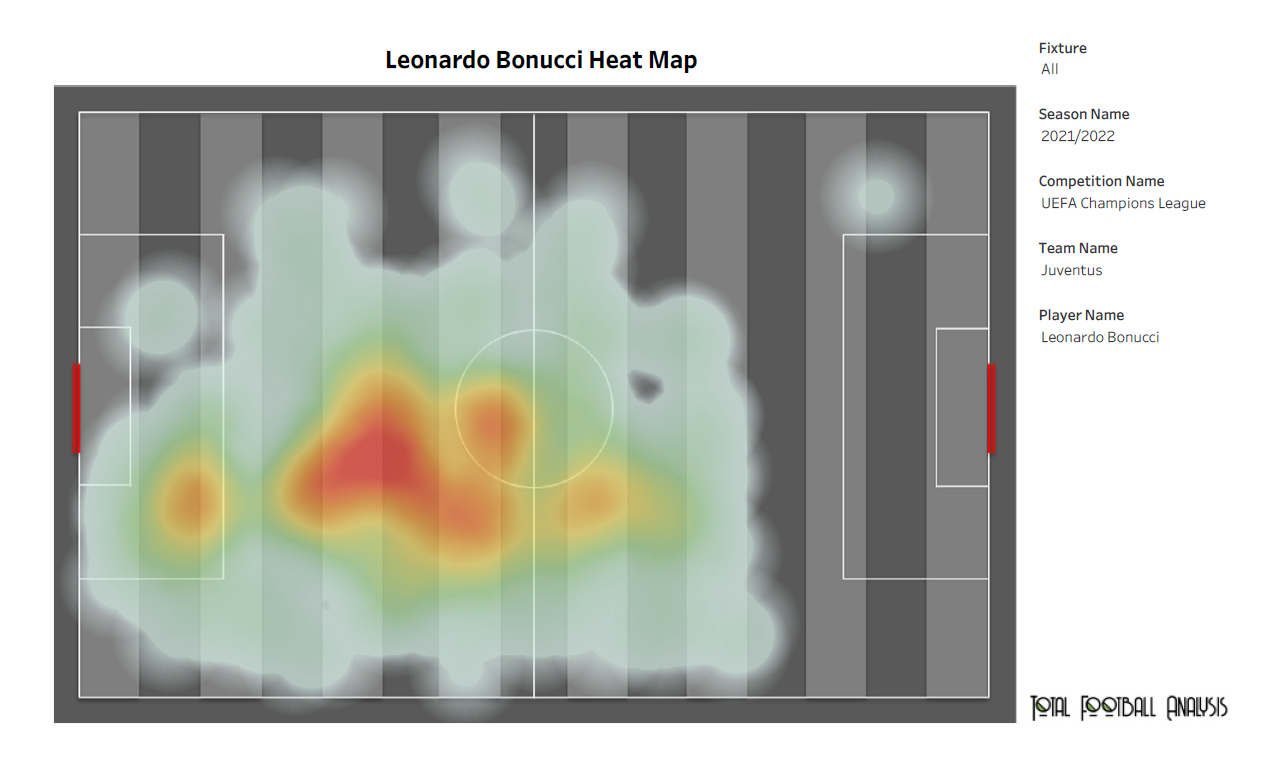 Bonucci’s heat map highlights the location where he is most active on the pitch. In Allegri’s 4-4-2 or 4-3-3 system, the veteran defender has been deployed at the heart of Juventus’ defense as a right centre-back. His heat map indicates that he has often moved high up the pitch near the midfield, where he can help his side dictate the play. Bonucci almost acts as a deep-lying playmaker when Juventus are in possession and can pick out threatening passes in the final third. 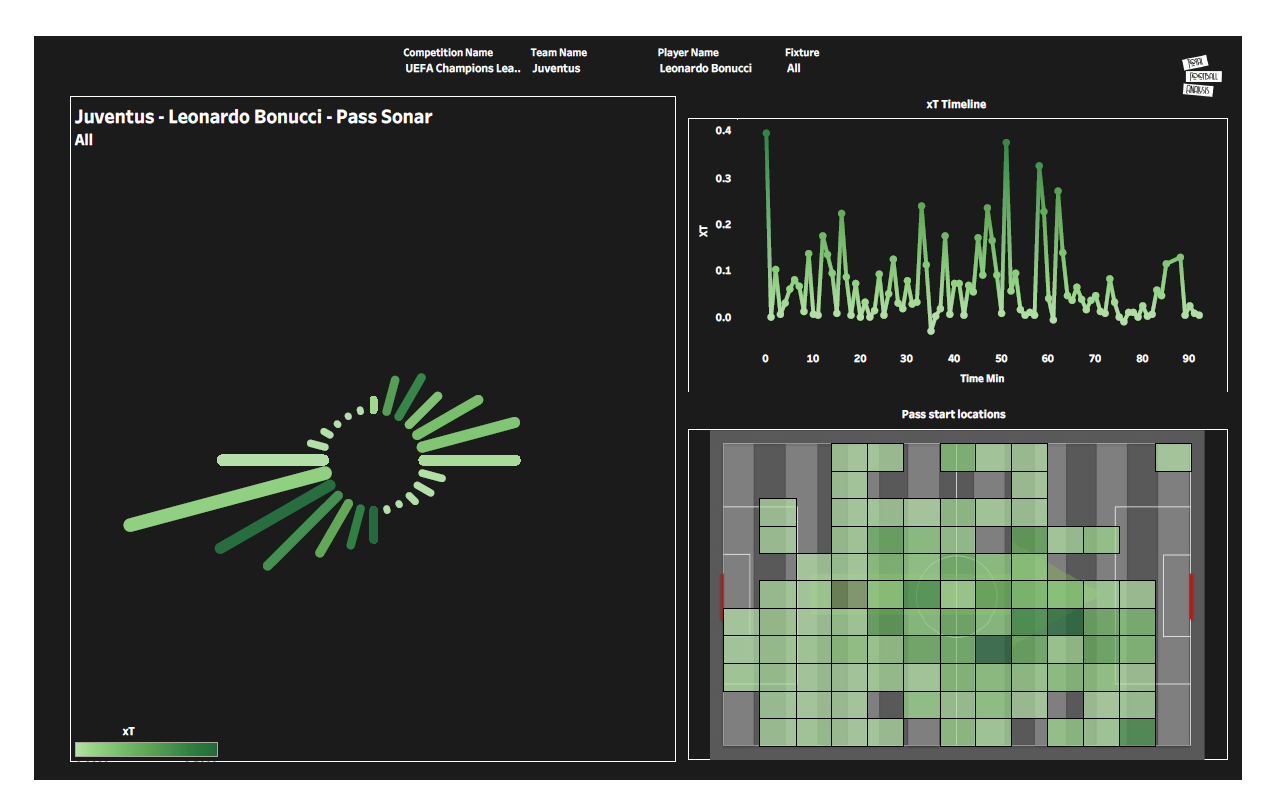 Pass Sonar outlines the direction of pass that a player or a team tends to make and indicates a player’s influence on the movement of the ball. In addition, it shows the frequency distribution of different passing angles for an individual player, as well as the typical length of pass attempts. Bonucci’s pass sonar indicates that he often looks to find a teammate in the advanced areas of the pitch. For a defender, his forward passing is impressive.

Only a handful of defenders are as assured in possession as Bonucci. He has been an asset for Juventus for many years now, and at 34-years of age, is still going strong. His performances along with his stats indicate that he will continue to be relied upon by Allegri, as Juventus aim to move to the quarter-finals of the Champions League.

Transfer Talk: Tyrick Mitchell – The Crystal Palace left back who...

Transfer Talk: Gabriel Magalhaes – The Brazilian centre-back as a possible...

Paulo Dybala to Inter Milan is Not a Done Deal Yet

Will We See Gabriel Jesus in the Black and White Stripes...