Juventus were first linked with Ajax right-back Noussair Mazraoui last October. Mazraoui, whose current deal expires at the end of the season, is set to become a free agent. Since the opening of the January transfer window, a host of clubs have joined Juventus in their chase for the Moroccan right-back. It has been reported that Roma, Arsenal, and Barcelona are all interested in securing the services of the 24-year-old. Mazraoui has been at Ajax since the age of nine and has slowly progressed, making his way to the ranks of the club’s senior team.

Mazraoui has made 125 appearances for Ajax since making his debut for the team in 2018, scoring 10 goals and adding a further eight assists. The Moroccan, who has indicated his desire to take on a new challenge and claimed that it is a good time for him to leave, has been a prominent feature of ten Hag’s backline this season, scoring five goals and registering two assists in 16 appearances in the Eredivisie. In addition, he has featured in all six of Ajax’s group stage matches.

Currently, Juan Cuadrado is Allegri’s preferred right-back, while De Sciglio has also featured in that role. The Bianconeri’s full-back area requires reinforcement, as both Cuadrado and Sandro are reaching the back-end of their careers. The addition of young talent like Mazraoui could solve the Old Lady’s full-back concerns for the foreseeable future. Although Juventus would need to convince him to join, given the fact that the Moroccan will have multiple options since he will become a free agent in June.

Let’s take a look at Mazraoui’s stats from the Champions League to gauge whether he is fit for a role at the Old Lady’s backline. 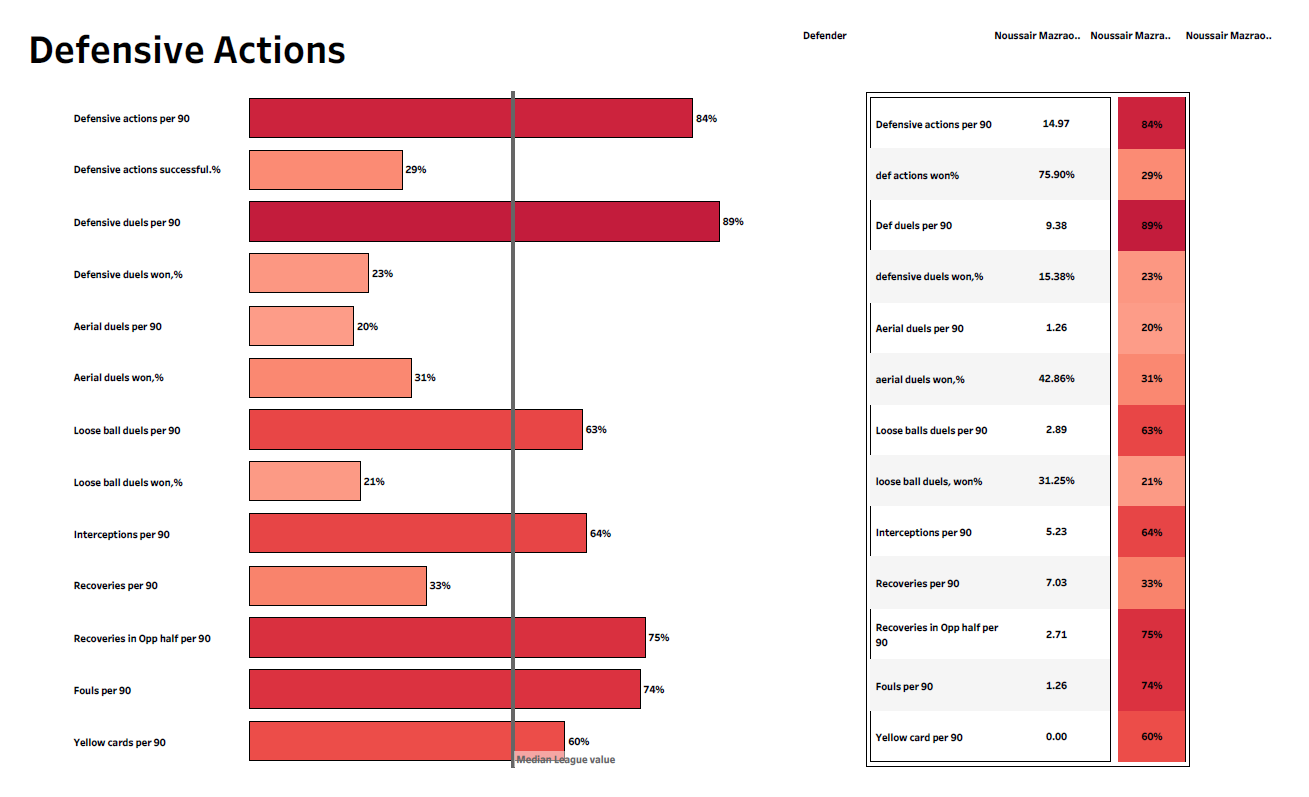 In the above viz., we can see that the majority of Mazraoui’s defensive stats have been average. This scenario is not surprising since the Moroccan is an attack-minded full-back, and his ability with the ball far outshines his defensive attributes. Nevertheless, Ajax were brilliant in the group stages of the Champions League and were barely troubled at the back. They conceded only five goals in their six group stage matches. Mazraoui was decent in his defensive work, if not impressive. His most notable stats were average defensive actions, average defensive duels, and average recoveries in the opponent’s half. In the previous seasons, Mazraoui struggled in defending against agile wingers, although this season, he has shown slight improvements in that aspect as well. 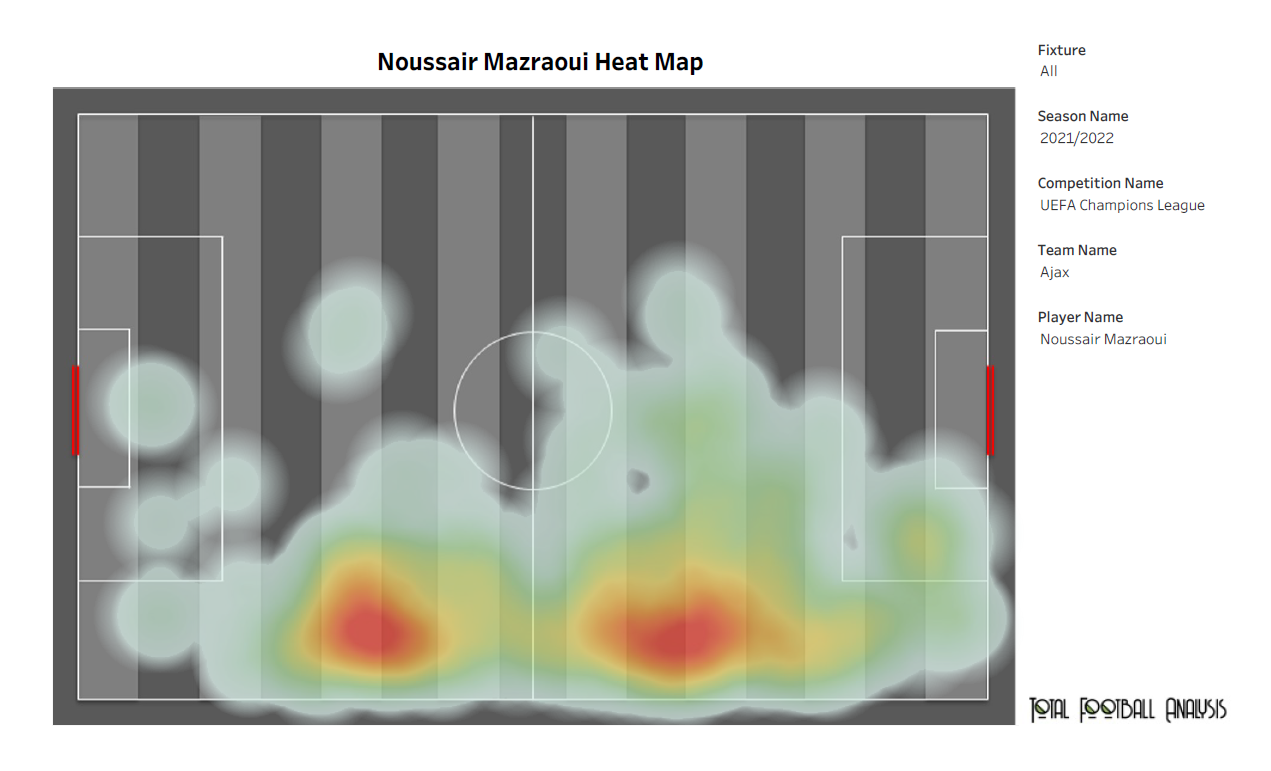 The above viz. highlights Mazraoui’s impressive work rate on the pitch. During the attacking phase, the Moroccan can combine well with his attacking forwards while he remains strong in one-on-one situations. In ten Hag’s 4-3-3/4-2-3-1 system, Mazraoui is deployed as a right-back. The red zones in both halves indicate that the Moroccan moved extensively in the right wing. 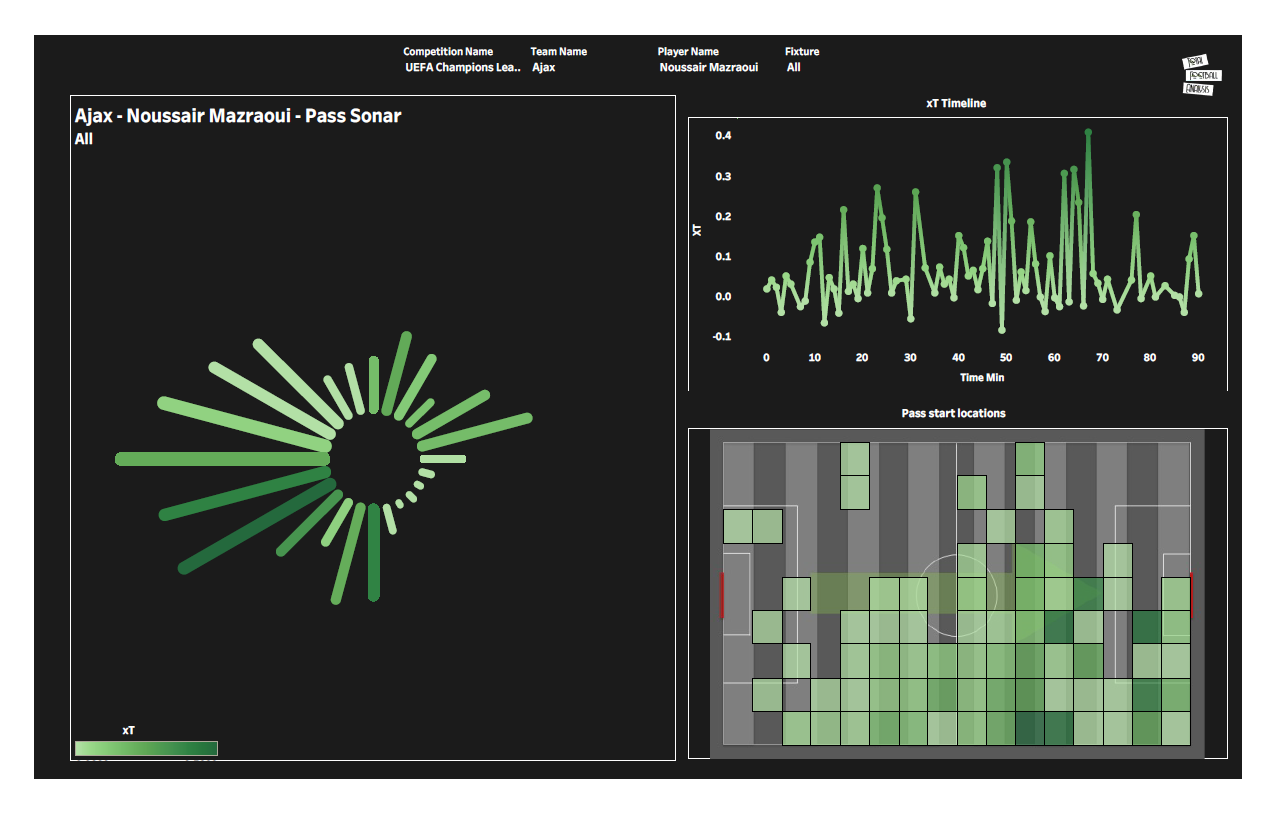 The above viz. provides a sense of directionality for Mazraoui’s impressive passing. We can see from the pass start location as well that the right-back has delivered highly threatening passes in the opponent’s half. Given the number of crosses and passes that Mazraoui attempts, his success rate is also brilliant. 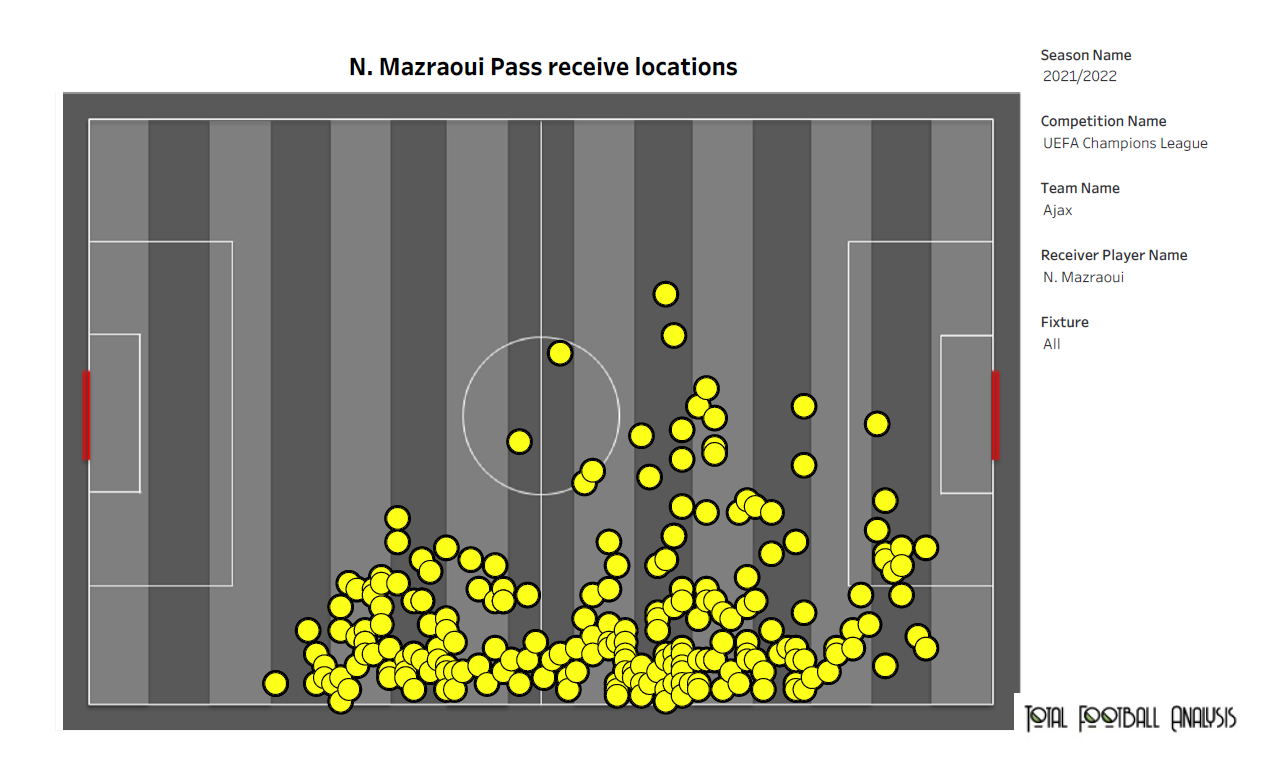 From his ‘pass receive location’ above, we can see Mazraoui’s mobility on the pitch. He receives most of his passes near the touchline on the right wing. The Moroccan excels at crossing the ball in threatening areas. In addition, he attempts a high volume of dribbles with a decent success rate. The 24-year-old displays the ability to find spaces near the wing in the opponent’s half or half-spaces.

Mazraoui’s stats indicate that the Moroccan would be an excellent signing for the Bianconeri in the fullback position. The attack-minded right-back could provide an additional creative element from the wide areas.