Ahead of an important phase of the campaign, the Old Lady are slowly seeing their injured players recover. Juventus were without nine players before heading into the match against Fiorentina in the first leg of the Coppa Italia semi-final. Among those nine players, Daniele Rugani recently made his comeback after a brief spell on the sidelines due to an injury. Replacing Bonucci, who picked up a calf injury in the win against Empoli, Rugani started in the Bianconeri’s recent 1-0 win over Spezia in Serie A.

Since the start of the season, Rugani has been on the fringes of the squad. Following two back-to-back disappointing loan spells, the 27-year-old started the season at the bottom of the pecking order. During the first half of the season, Rugani barely saw any game time, however, since the turn of the year, the defender has made six appearances in the Serie A, putting up impressive performances at the back consistently. In the absence of Bonucci, Rugani partnered de Ligt at the back and was solid throughout the match.

His performances since the start of the year have made many fans believe that he can perhaps become a long-term centre-back option for the Old Lady. Nevertheless, he needs more game time under his belt to prove if he can perform consistently.

Let’s take a look at some stats to gauge whether Rugani can take over the responsibilities of Juve’s main centre-back. 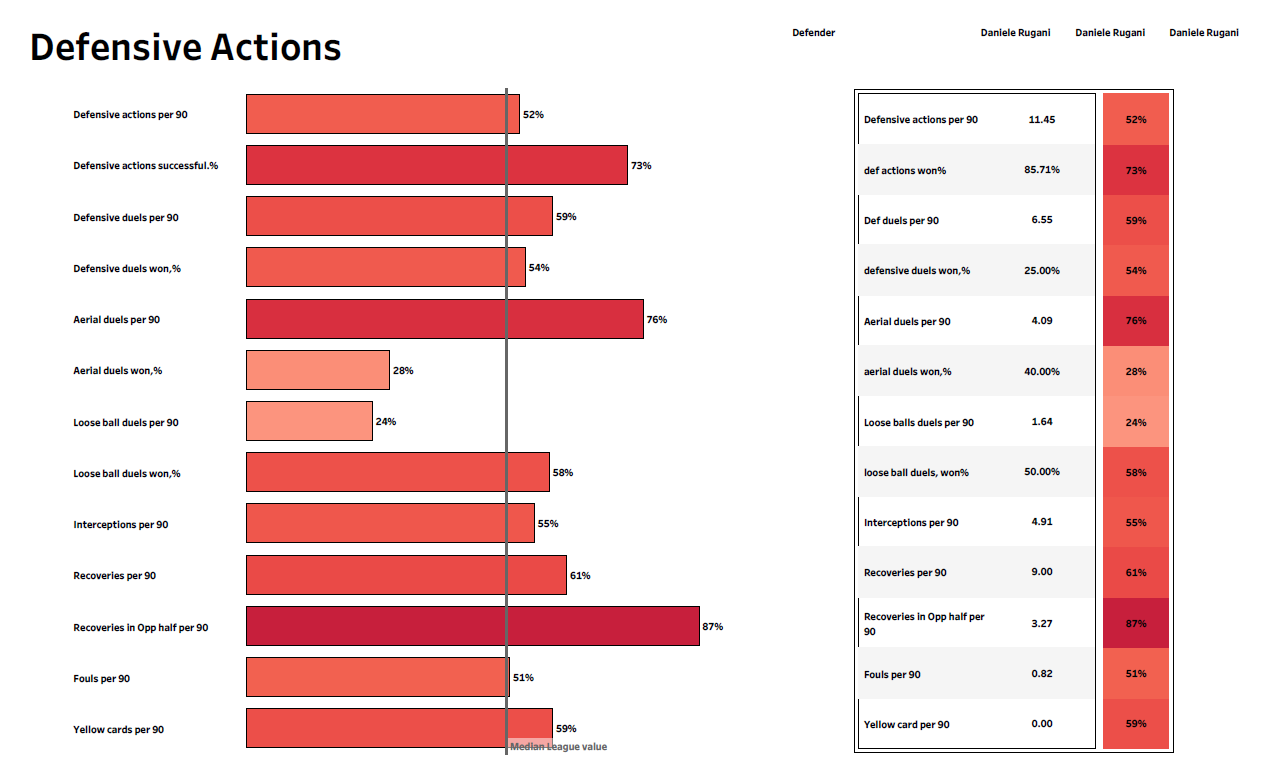 In the above viz., we can see Rugani’s defensive stats from his appearances in the Champions League. Rugani has performed above the league median in terms of the majority of defensive stats. His most notable stats are defensive actions successful and recoveries in the opponent’s half per 90. However, Rugani has won just 25% of the defensive duels and 40% of the aerial duels that he has been involved in. Rugani has displayed decent positional awareness, as indicated by his interceptions per 90 and recoveries per 90. The 27-year-old has fared better in terms of his positional play than his other defensive attributes. 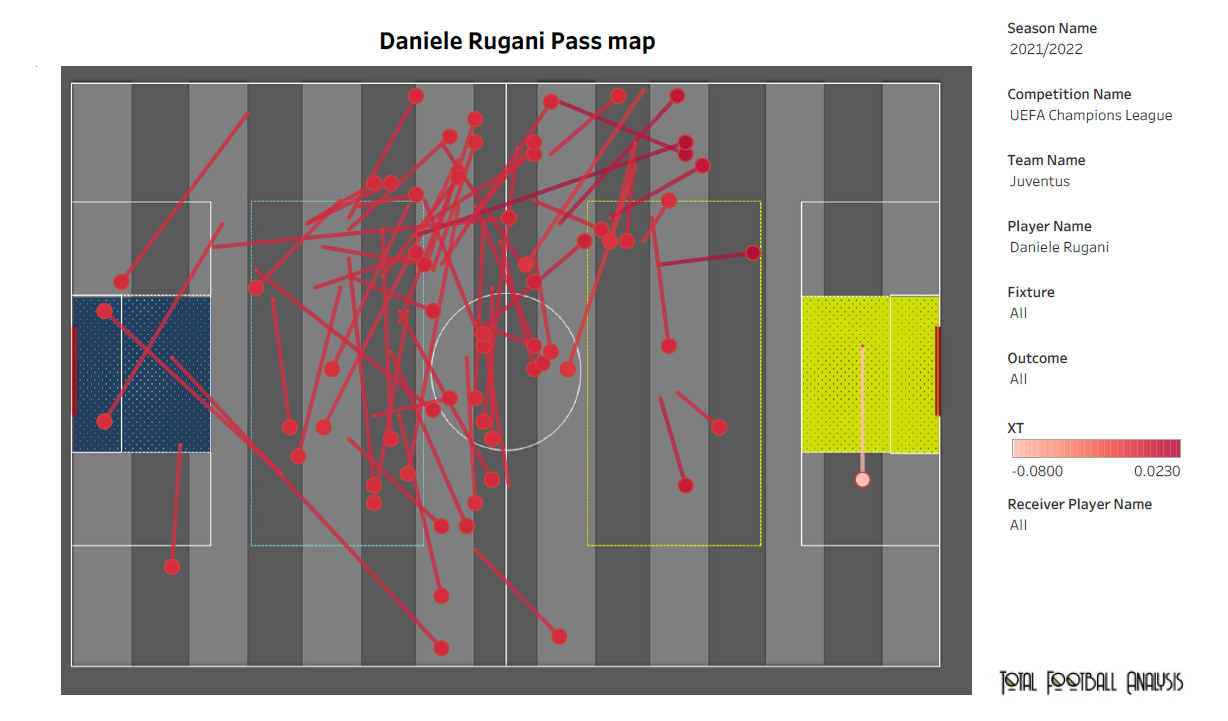 The above viz. highlights the location of the passes delivered by Rugani. The 27-year-old is assured in passing and remains comfortable in possession. We can see in the above viz. that Rugani attempts many forward passes, indicating his desire to move the play forward. He has made more forward passes than lateral ones. In addition, he has made multiple long passes into the higher areas of the pitch, which indicates that he isn’t afraid of attempting forward passes into the opposition’s half. 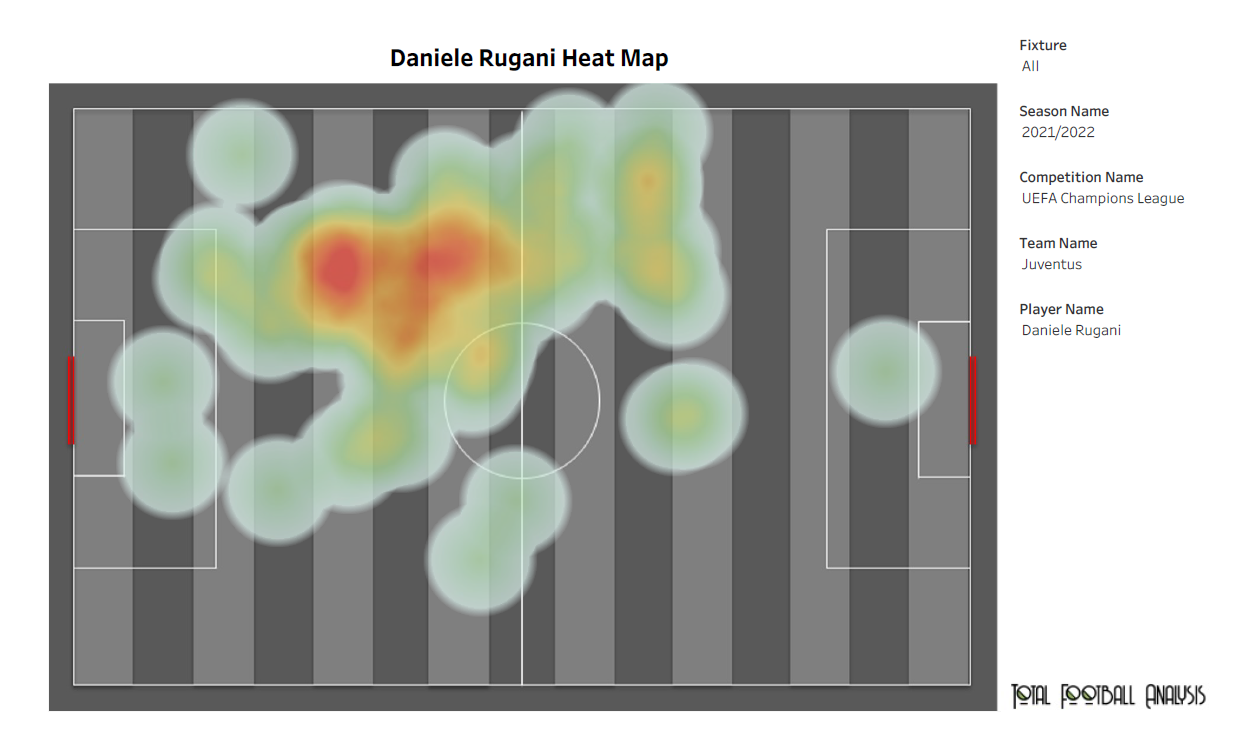 Rugani possesses decent pace, and his work rate is also commendable. He can be deployed on either side of the centre-back pairing. The 27-year-old does not jump into tackles instead utilizes his positional sense to cope with the danger. In the above viz., we can see the areas of the pitch where the defender is most active. Rugani is most active in his defensive half while also drifting near the centre. The defender is known for contributing during the transition phases and carrying the ball out of the back.

Rugani’s stats and recent performances indicate that he can become a long-term centre-back option for the Bianconeri, however, he would need to perform consistently in the upcoming matches. Given the absence of Bonucci, the 27-year-old will get more game time.