It was reported earlier this month that the Juventus hierarchy would be focusing on contract renewals after an impressive transfer window. Recently, it has been claimed that 29-year-old full-back, Mattia De Sciglio, is close to signing a new deal. After a slow start to the season, De Sciglio has emerged as an important player amidst Bianconeri’s injury crisis. While he is yet to establish himself in Allegri’s starting lineup, De Sciglio has ensured that he is regularly on Allegri’s radar with his performances.

De Sciglio came through the youth system at AC Milan, making his professional debut in 2011. His breakthrough came in the 2012-13 season, where he featured regularly in Milan’s lineup. After six years and 110 appearances in the Serie A for the Rossoneri, De Sciglio made the switch to Juventus in 2017, signing a five-year deal. However, his move to the Old Lady has been underwhelming as he failed to cement his place in the starting lineup. During the 2020-21 season, De Sciglio was loaned to Lyon, where he made 29 appearances in Ligue 1 and re-established himself as a starter.

Since Allegri’s re-appointment, De Sciglio has been largely convincing with his displays. So far, he has made 14 appearances in Serie A and three in the Champions League. Although he was thought to be on his way out of Juventus, reports of a new deal indicate that the 29-year-old has emerged as Allegri’s key player amidst an inconsistent and injury-plagued season.

Let’s take a look at his stats in the Champions League to gauge his performances for the Old Lady this season. 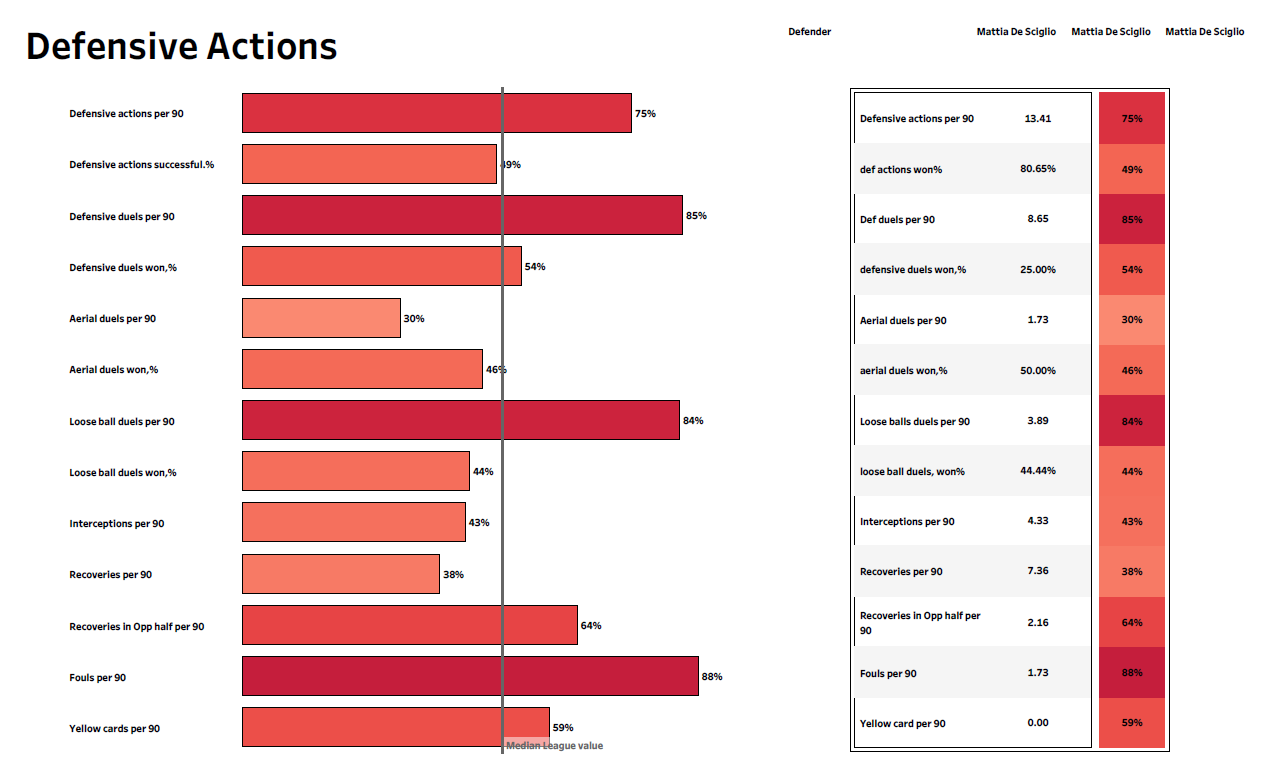 In the above viz., we can see De Sciglio’s defensive stats. Many of his stats are below the league median. Some of his most notable stats are defensive actions per 90, defensive duels per 90, and loose balls duels per 90. Despite his below-average stats, De Sciglio has maintained a decent defensive contribution whenever called upon. Although his attacking output is lacking, De Sciglio is defensively sound. He possesses impressive positional awareness and is assured in passing. As highlighted in the above viz., the 29-year-old is underwhelming in the air, averaging just 0.3 aerial duels won in the Champions League. In addition, his contribution during set-pieces is limited. 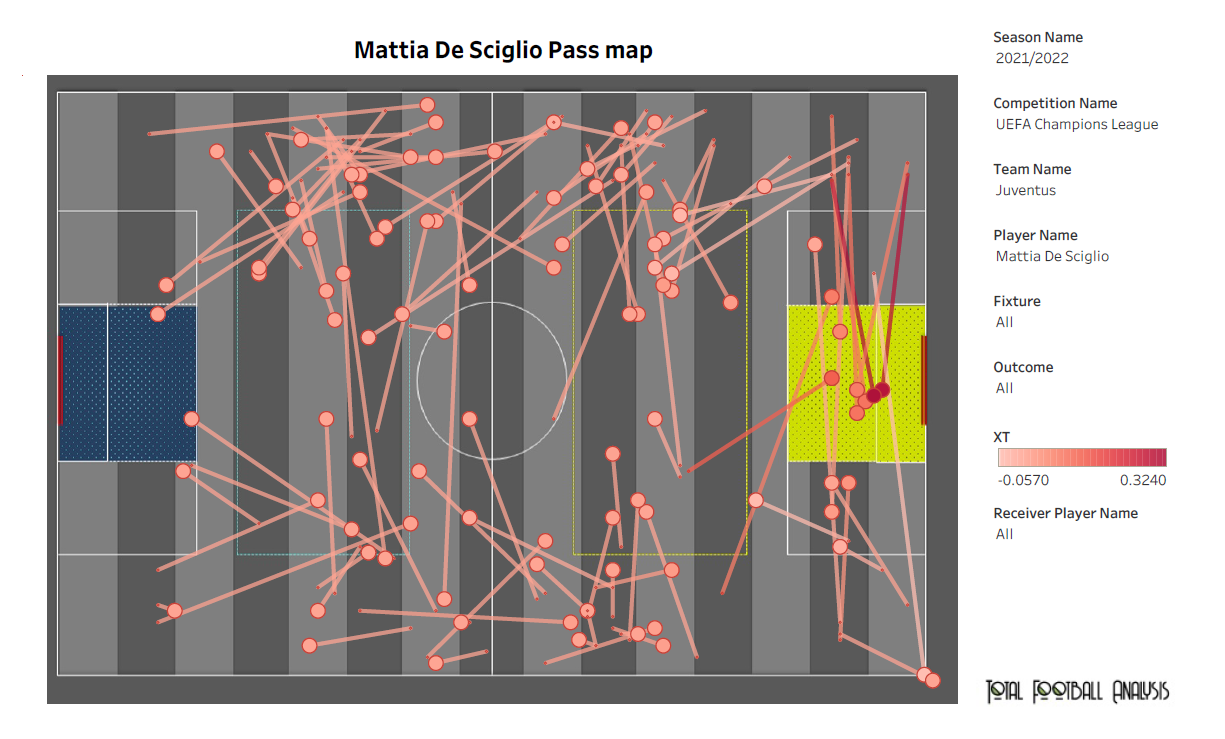 In the above viz., we can see the areas of the pitch where De Sciglio has delivered his passes. Some of his passes into the opposition’s box carry a high expected threat. De Sciglio has maintained an impressive passing success rate of 83.7% in the Champions League, although his limited appearances should be taken into consideration. Other than his passing, De Sciglio demonstrates decent ball control, and he is adept at receiving long passes. 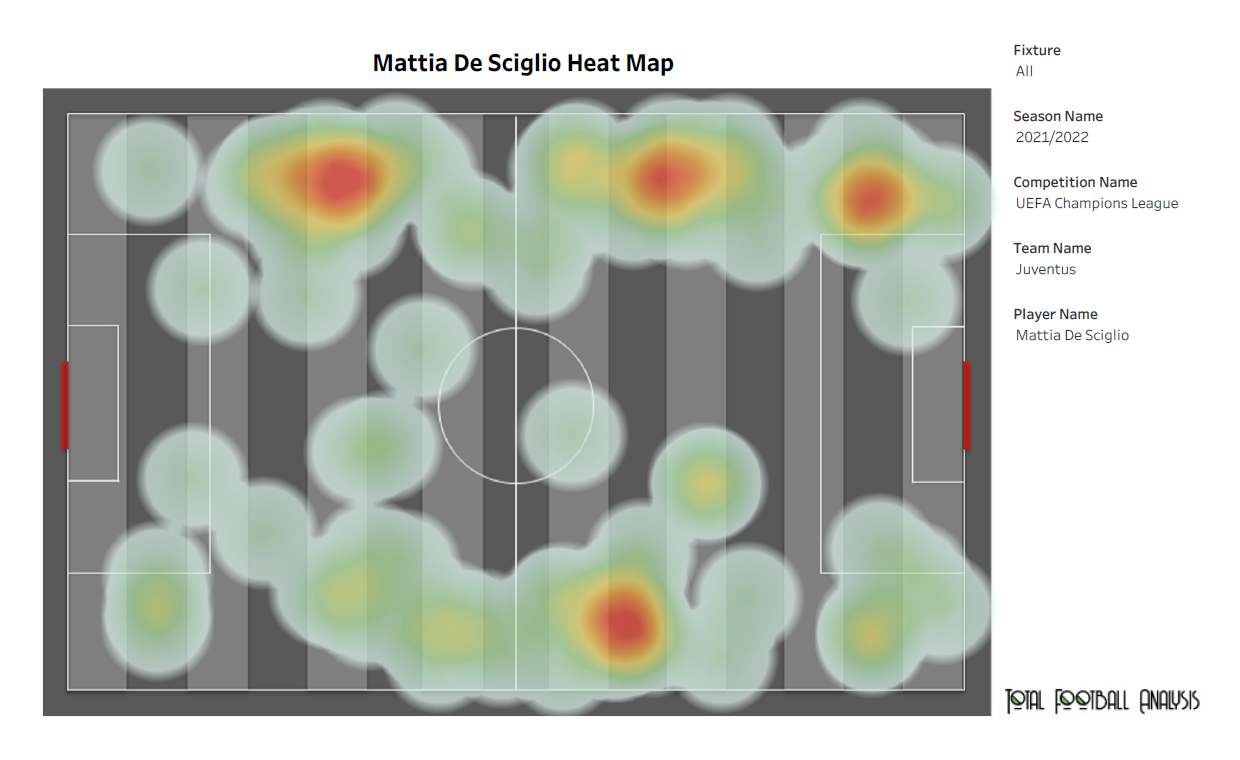 In the above viz., we can see the areas of the pitch where De Sciglio is active. He is versatile and can operate both as a left-back as well as a right-back. His versatility has allowed Allegri to deploy the 29-year-old in both the flanks. Against Villarreal in the Round-of-16, De Sciglio operated on the left side of the five-man midfield. Although he found it difficult to keep up with Samuel Chuckwueze’s dribbles during the initial phases of the match, he eventually grew into the match and maintained his defensive contribution.

While De Sciglio’s stats and recent performances have been average, Allegri has continued to utilize the 29-year-old in multiple roles. It is unclear whether he is in the Old Lady’s long-term plan, but he has emerged as a player who can be counted upon.