Home Analysis Lecce match stats and viz: Defensive duels winning zones, Final-third threat, passing...
Facebook
Twitter
WhatsApp
Linkedin
ReddIt
Email
Telegram
On Saturday night, Juventus returned to winning ways after their Champions League defeat, as they defeated Lecce 1-0 in Serie A. Juventus were in a spot of bother following their early exit from the UFEA Champions League, and serious questions were asked about Max Allegri’s side. This win would help him and his team settle down a bit and give them enough confidence to fight to finish in the top four in Serie A.

We’ve broken down all the key stats for you to digest, including;

* average positions and much more!

We also try to answer some questions for you with the visuals;

How did Juventus win even with low shooting accuracy? How has Lecce’s disciplined defence restricted Juventus to one goal?

To navigate the stats gallery simply click on the numbers to move through the pages. 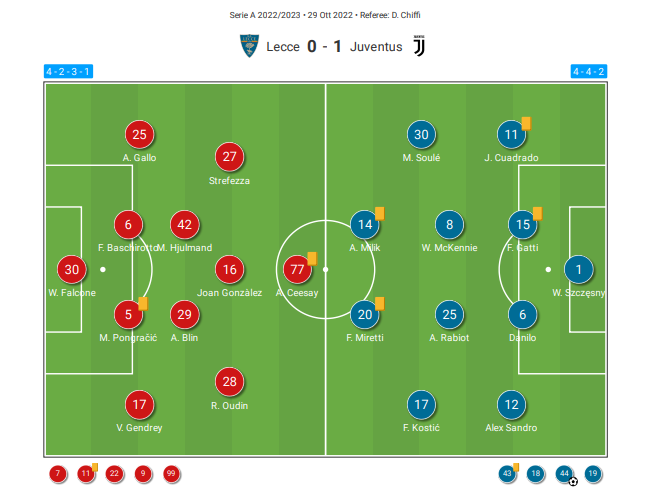 Lecce went into the match with a 4-2-3-1 formation with Assan Ceesay as the lone striker, who was later replaced by Lorenzo Colombo.