Juventus will look to cling on to what is their last chance to not get eliminated from the UEFA Champions League as they face Benfica at Estadio da Luz on Tuesday night. The Italian side has only one win in the Champions League so far and has to beat a formidable Benfica to keep their hopes alive. Benfica, who have been playing brilliant football and managed a draw against PSG in the group stages, should sleep more comfortably on Monday night with eight points to their name.

Juventus have been on a poor run of form and are in the eighth position in the Seria A. However, they will be boosted in confidence by their wins in the last two games. They had a brilliant xG rate of 2.43 against Empoli when they won 4-0 and 2.2 in the 1-0 win against Turin. They will be hoping to translate this form to the Champions League.

Benfica, on the other hand, are enjoying a rich vein of form as they sit at the top of the table in the Primeira Liga with 28 points from ten matches. They have an incredible 1.79 xG rate with an average of 2.18 goals per game.

We now look at some of the stats that could predict the outcome of the match. 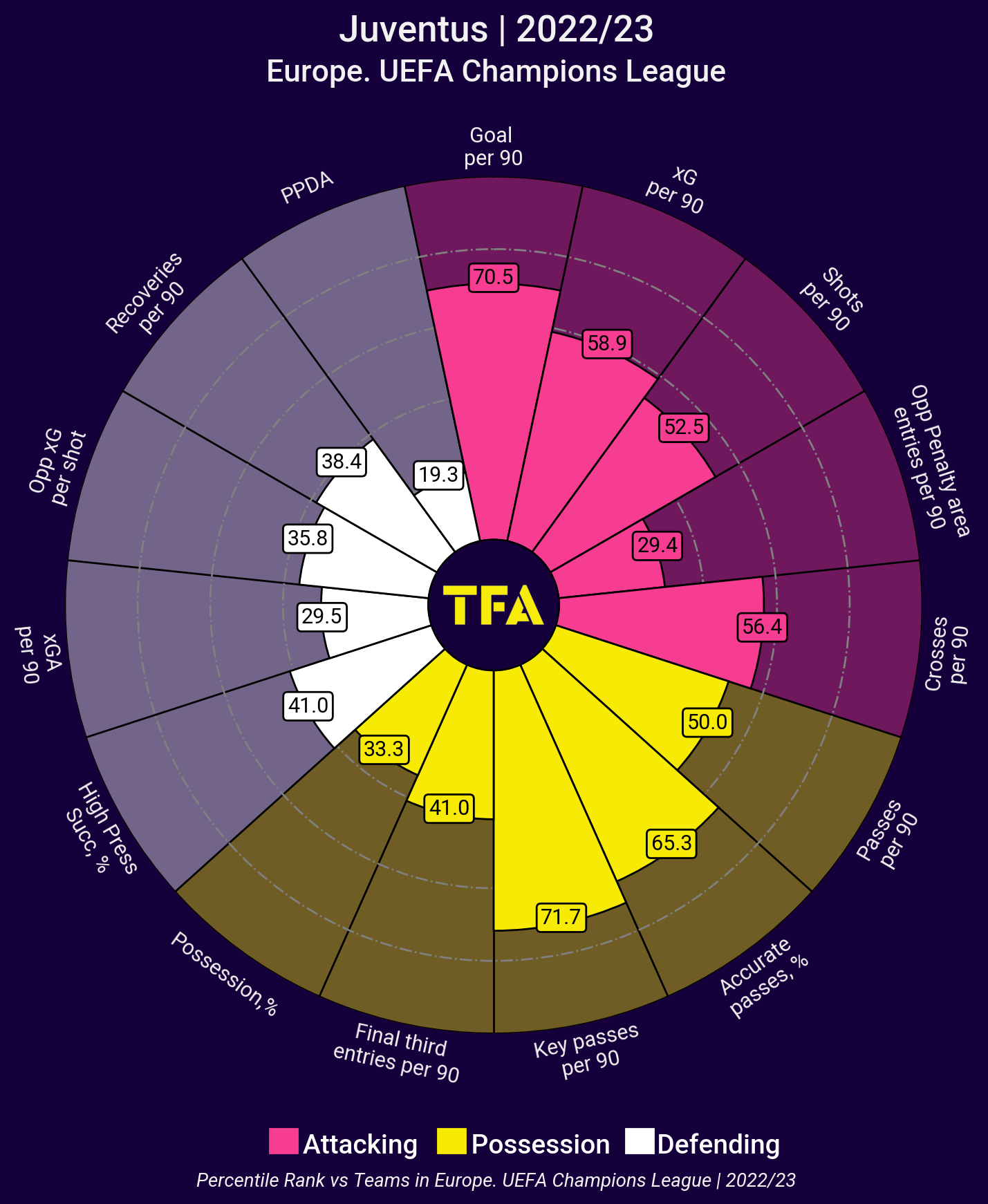 Juventus have not been at their very best recently, and one of the reasons is their inefficiency in the final third. They have a very low rate of opposition penalty entry rate of 29.4% and a final third entry rate of 41%. The above viz shows their stats per 90 minutes compared to other European teams. The Italian giants will need much better attacking play than that if they have to win against Benfica. 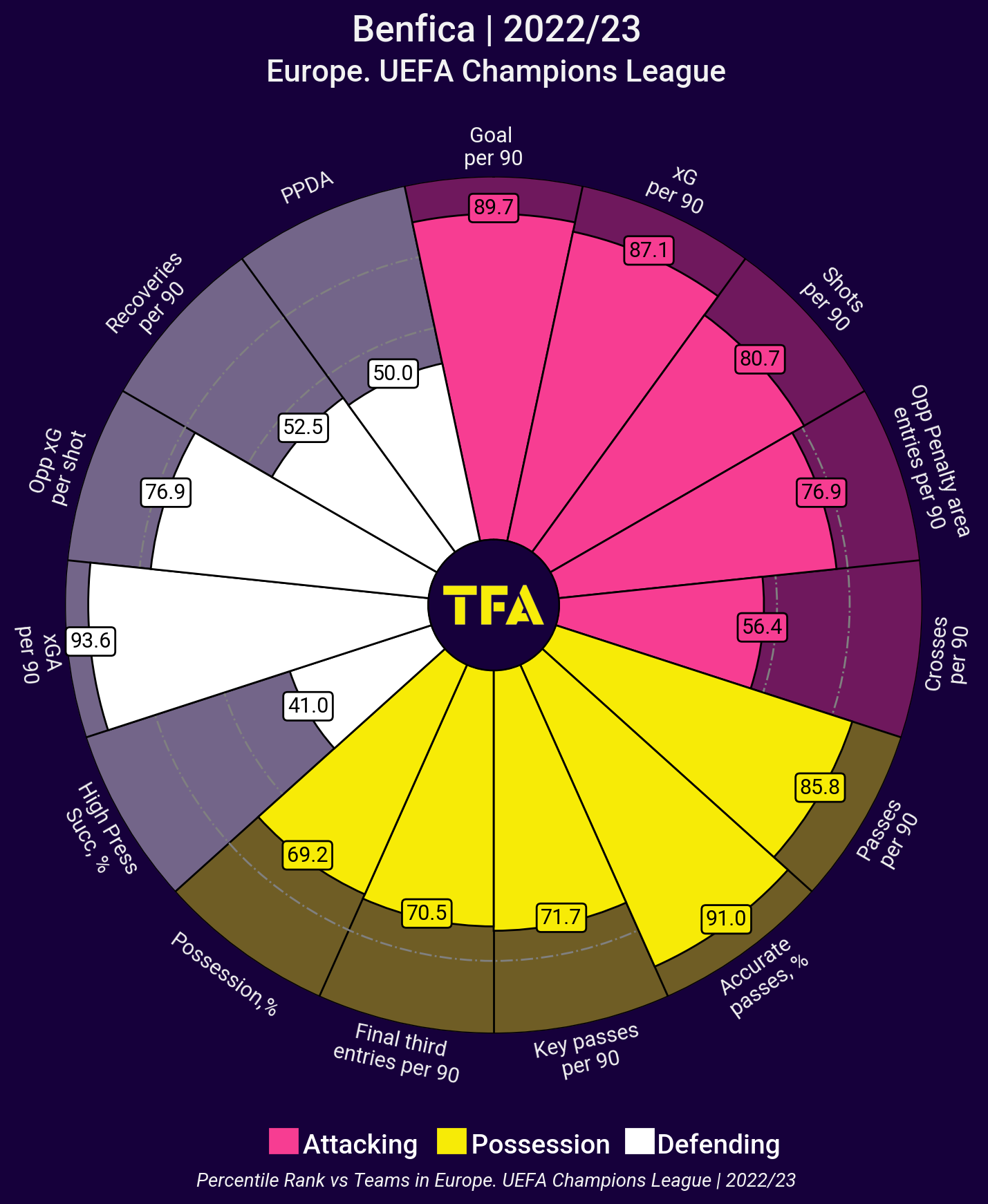 Benfica are playing beautiful football at the moment, and there is a clear contrast with their upcoming rival. With very high shots per 90, entry into the opposition penalty box and much more accurate passing. Benfica poses a huge threat to the Italian side and goes into the tie as clear favourites.

Juventus had only 35 interceptions in the home fixture against Benfica in the Champions League this season and most of them were in the defensive third. They failed to recover the ball in the middle of the park and therefore let the attacks grow. They will be looking to rectify this mistake in the away fixture.

Benfica on the other hand managed to recover the ball almost twice as Juventus. Their recovery in the middle of the Park and in the attacking third helped them to stop Juventus from building an attack and also helped them to attack more. 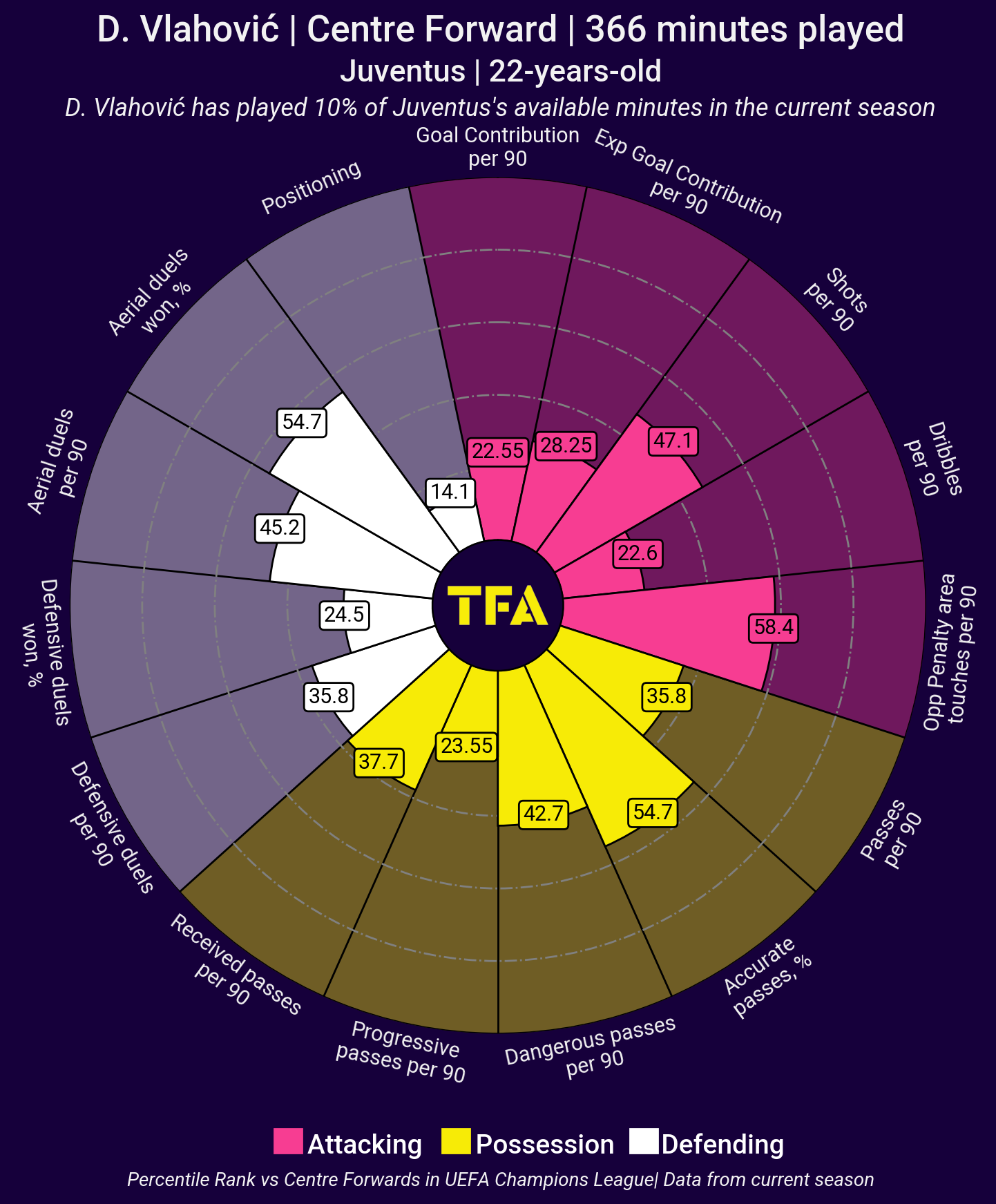 Juventus desperately needs a win, and there is no better way to ensure a victory than by scoring goals. Juventus will be hoping for the same from Dusan Vlahovic. He is their top scorer this season with 6 goals across all competitions. The above viz shows his stats per 90 minutes compared to other strikers in the Champions League this season. Vlahovic has 2.46 average shots on target per game but only has an average of 0.25 goals per game in the Champions League this season. Juventus will need him to unleash his full potential to emerge victorious against Benfica. 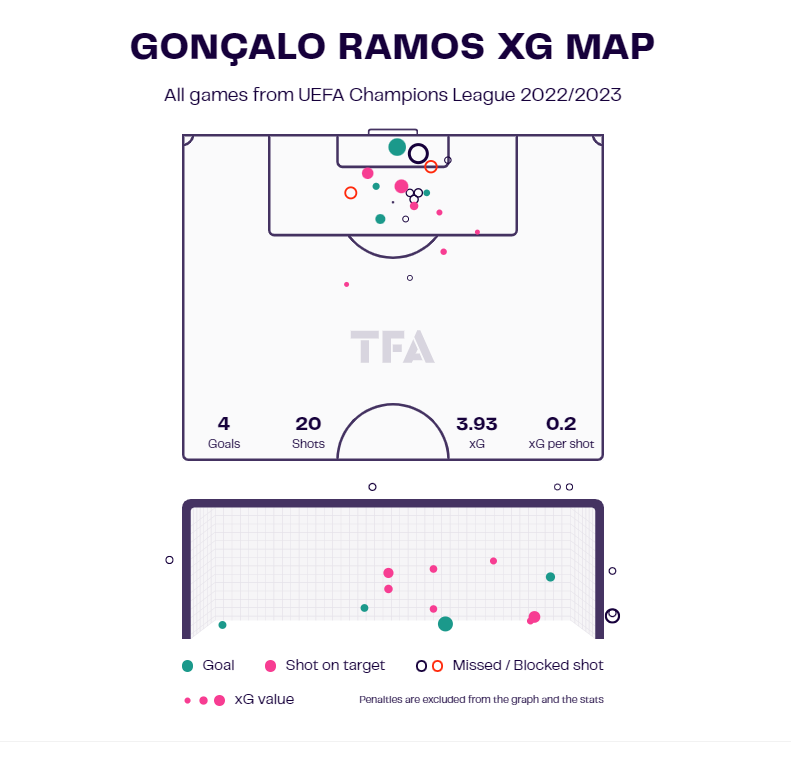 Benfica will be counting on their main man, Goncalo Ramos, to find the net. The Portuguese youngster is their top scorer this season with 6 goals across all competitions. They will be hoping he can again produce some magic in the home fixture against Juventus.

Juventus will be going into this tie without the Argentinian midfielder Leandro Paredes, who picked up a thigh injury in the match against Empoli. Even though Paul Pogba and Federico Chiesa are almost fit, it is unlikely that they will be called up for the match. Dusan Vlahovic leads the Juventus front line and will most probably be accompanied by Moise Kean up front.

Benfica have a fit squad and are most likely to go unchanged into this match.

Juventus go into this match with an injury-stricken squad, hoping to pull off a miracle. Benfica, on the other hand, should have a comfortable fixture if they don’t make a mess of this match.

Visuals via Wyscout and the TFA data viz engine