Giorgio Chiellini will depart Juventus later this month after serving the Turin-based team for 17 years. Ever since that announcement, the Old Lady have been hunting for a suitable replacement for the 37-year-old. One possible option is Lille and Netherlands centre-back, Sven Botman. The Dutchman was one of the star men who helped Les Dogues to a surprise Ligue 1 title victory in the 2020-21 season ahead of Paris Saint Germain. In this article, we will dissect the Dutch defender’s performances for the club from Northern France. The stats mentioned below will be from the 2021-22 UEFA Champions League unless stated otherwise. 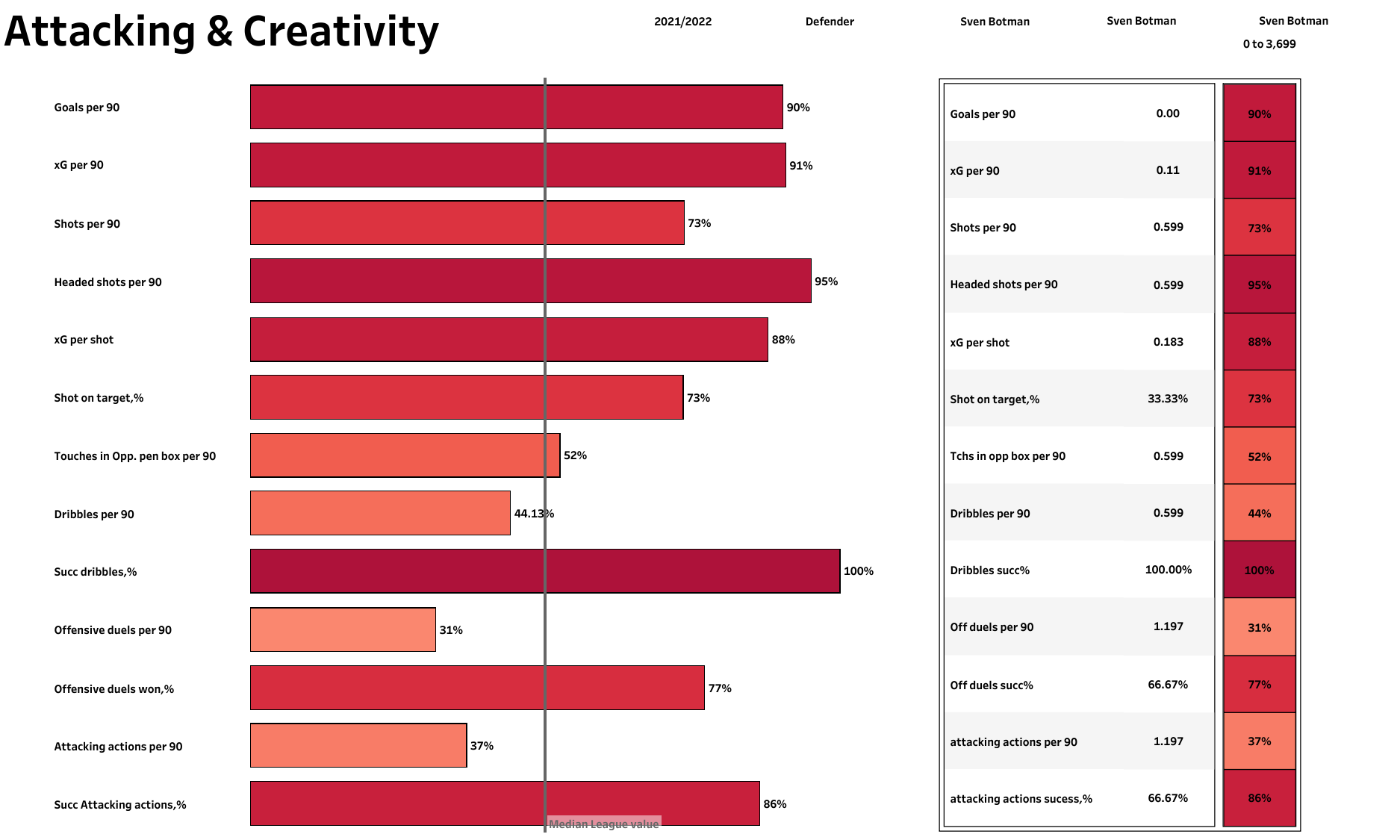 Botman featured in five games for Lille in the 2021-22 UEFA Champions League season as Les Dogues topped their group ahead of Red Bull Salzburg, Sevilla and Wolfsburg. Botman played a total of 417 minutes in the competition. The Dutchman generated an xG of 0.11, ranking him in the top 9% for defenders, even though he did not score a goal or provide an assist. Botman attempted 0.59 shots per 90, and all of it came from the head. In fact, the 21-year-old ranked in the top 5% for headed shots per 90. The Dutchman even managed to hit about a third of his shot attempts on target and generated an xG per shot of 0.18, putting him in the upper quintile for the latter category. 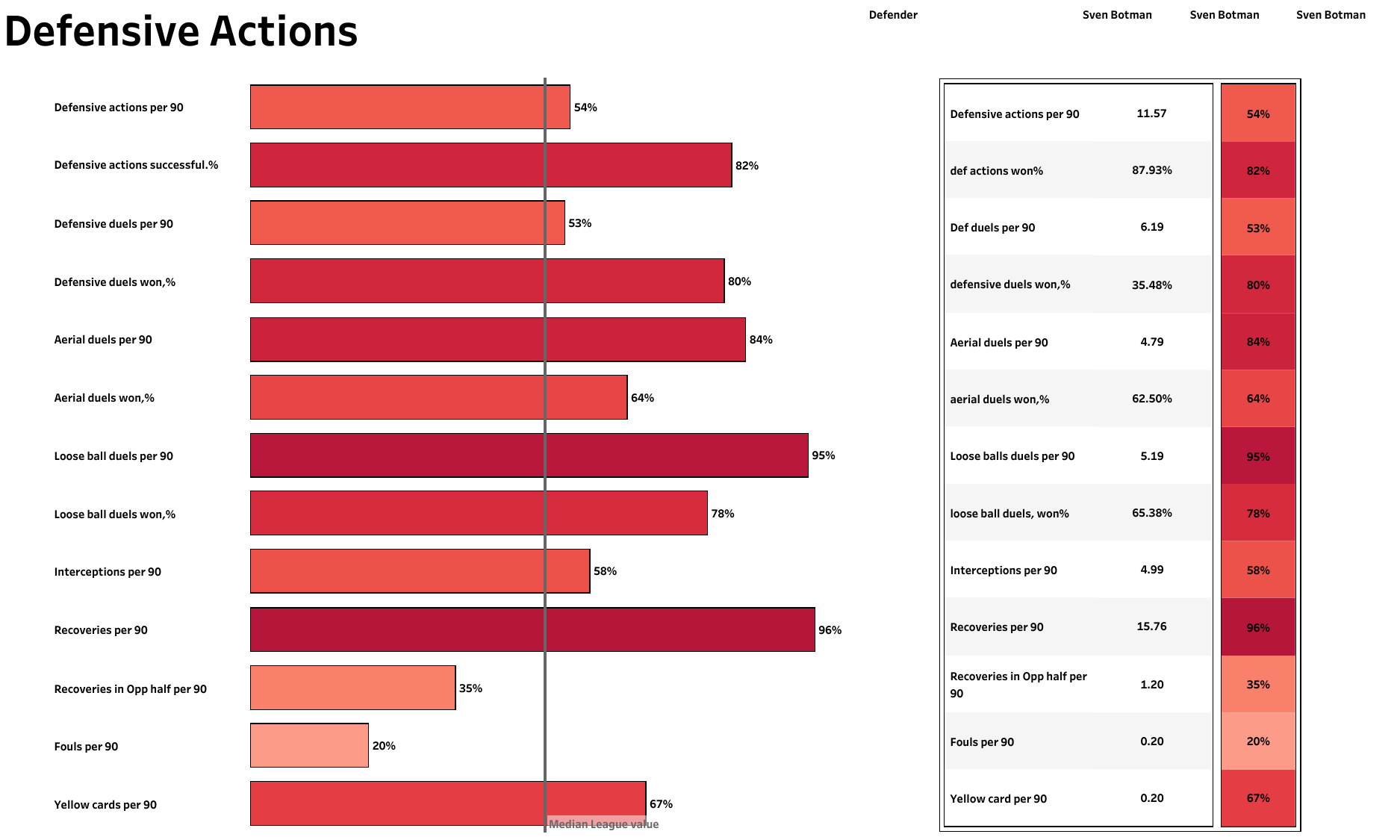 Sven Botman attempted 11.57 defensive actions per 90, and he was successful in nearly 88% of these attempts. Botman won 35.48% of the defensive duels he has contested, ranking him in the top quintile for defenders. The Dutchman used his enormous height of 195 cm to his advantage, attempting 4.79 aerial duels per 90 and winning 62.5% of them. He also attempted 5.19 loose ball duels per 90, recovering 65.38% of the said loose balls. The Dutchman made nearly five interceptions per 90 and over 15 recoveries per 90, the latter of which ranked him in the 96th percentile for defenders. 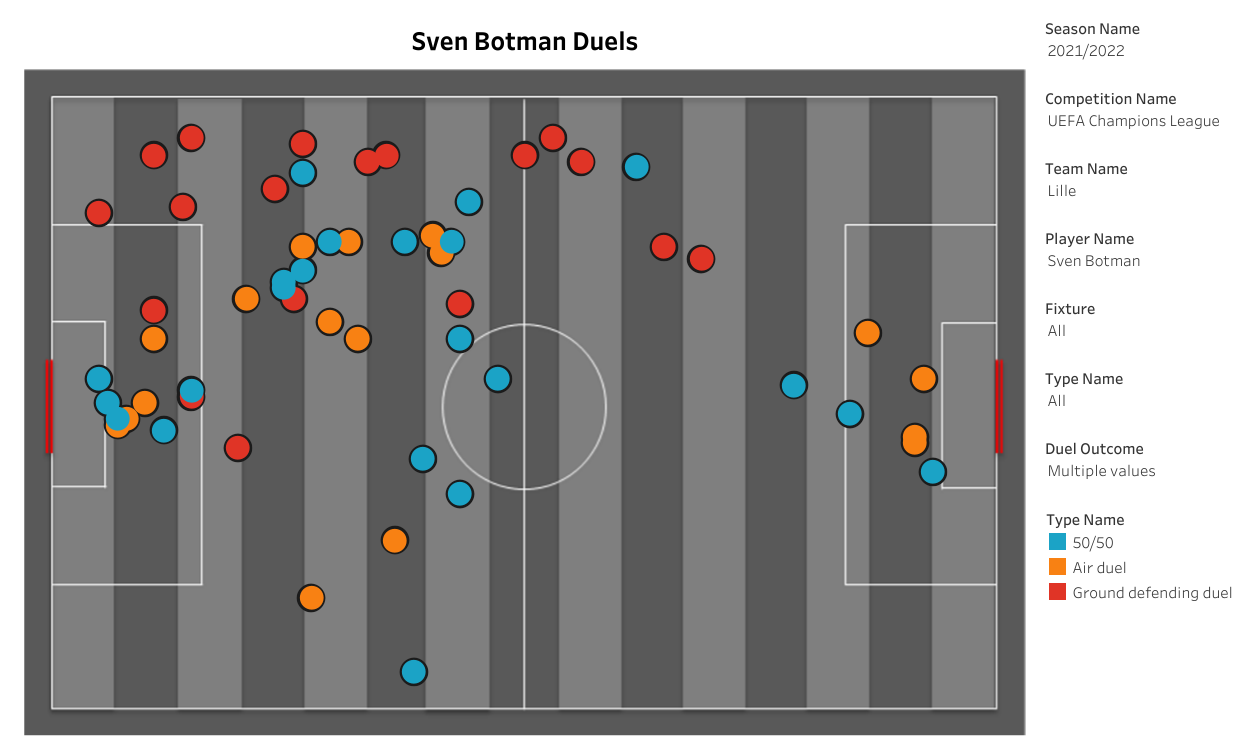 The above viz displays Botman’s winning duels’ location. The Dutchman won 50/50s, aerial duels as well as ground duels for Les Dogues. The majority of the duels won by Botman came in his half outside the penalty area. He also won four aerial duels in the opponents’ penalty box, mostly from set-pieces.

Lille came crashing back down to Earth this season domestically, finishing 10th in Ligue 1, which means they will not be playing any continental football next season. As a result, Botman has been linked with a move away from Les Dogues. AC Milan may be the favourites to sign the Dutchman, but Juventus also have the resources, and therefore should make an attempt to steal Botman from the Rossoneri to replace Chiellini.