The Old Lady have reportedly joined the race to sign Barcelona defender, Ronald Araujo. Juventus are believed to continue their squad overhaul in the summer and are keeping an eye on Araujo. The 23-year-old has been an instrumental part of Barcelona’s revival this season. He is a reliable defender, who has put up impressive performances for Barca, making 33 appearances across all competitions this season.

Araujo has emerged as a subject of interest for a host of clubs, including Manchester United and PSG. Although his contract runs till next year, talks of a new contract have not progressed so far. It has been indicated that the 23-year-old remains in Barcelona’s long-term plans, however, it would be difficult for the Catalan giants to hold on to the defender if a suitable offer does arrive.

Juventus would be looking to strengthen their defense in the summer. With both Chiellini and Bonucci at the back-ends of their careers, the Bianconeri would be looking for long-term options for their backline. Juventus have been inconsistent this season, having already crashed out of the Champions League and currently placed fourth in Serie A. With multiple players reportedly on their way out, Juventus would be preparing to bounce back next season. While they have already made a few additions in their attack and midfield, Juventus still need depth in their backline if they are to challenge for silverware next season. Adding a player of Araujo’s potential could definitely aid Juve next season.

Let’s take a look at some stats to gauge whether Araujo is an ideal addition to Allegri’s backline. 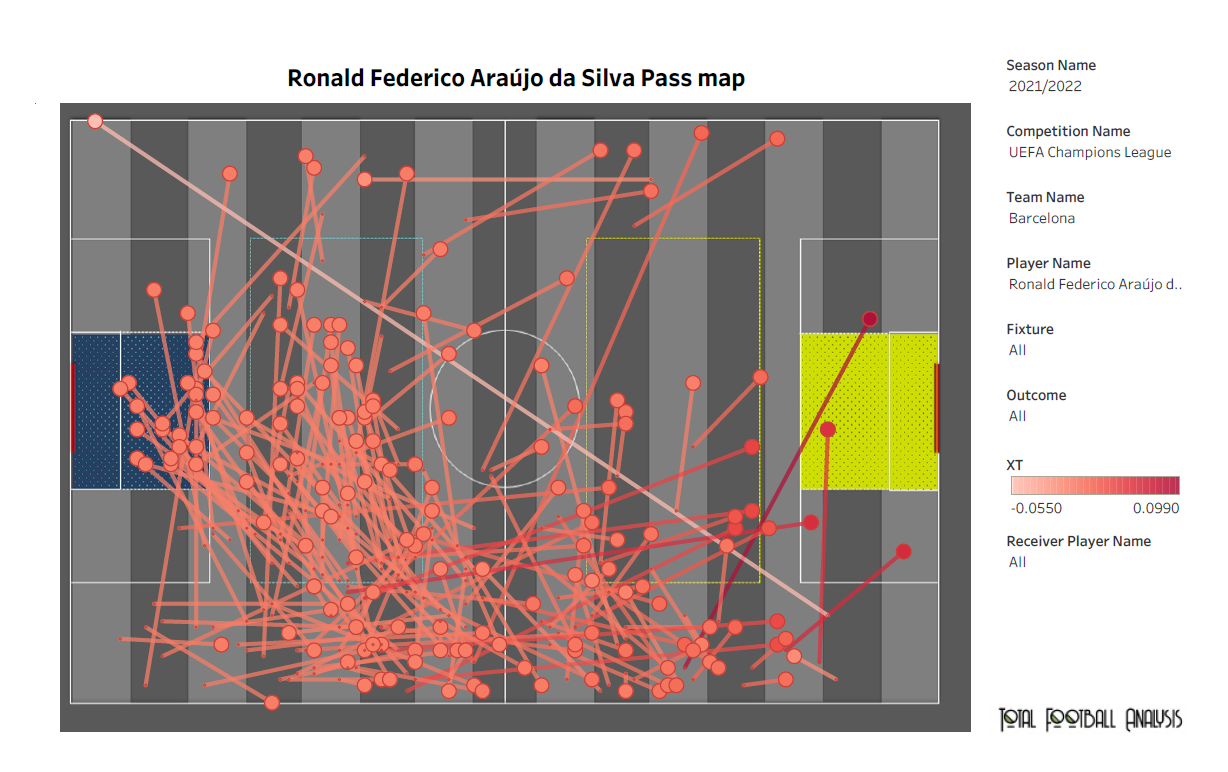 In the above viz, we can see the various passes delivered by Araujo. Although not his greatest strength, the 23-year-old can distribute the ball in the wide areas in his half, linking up with the right-back. We can see that most of his passes have been made on the right wing. The Uruguayan is also capable of making long passes behind the opposition’s defensive line. When attempting long balls, the 23-year-old moves his way forward with the ball and looks for spaces to attack by picking out his attacker’s runs via a diagonal pass. The above viz also displays his threatening passes into the opponent’s half. 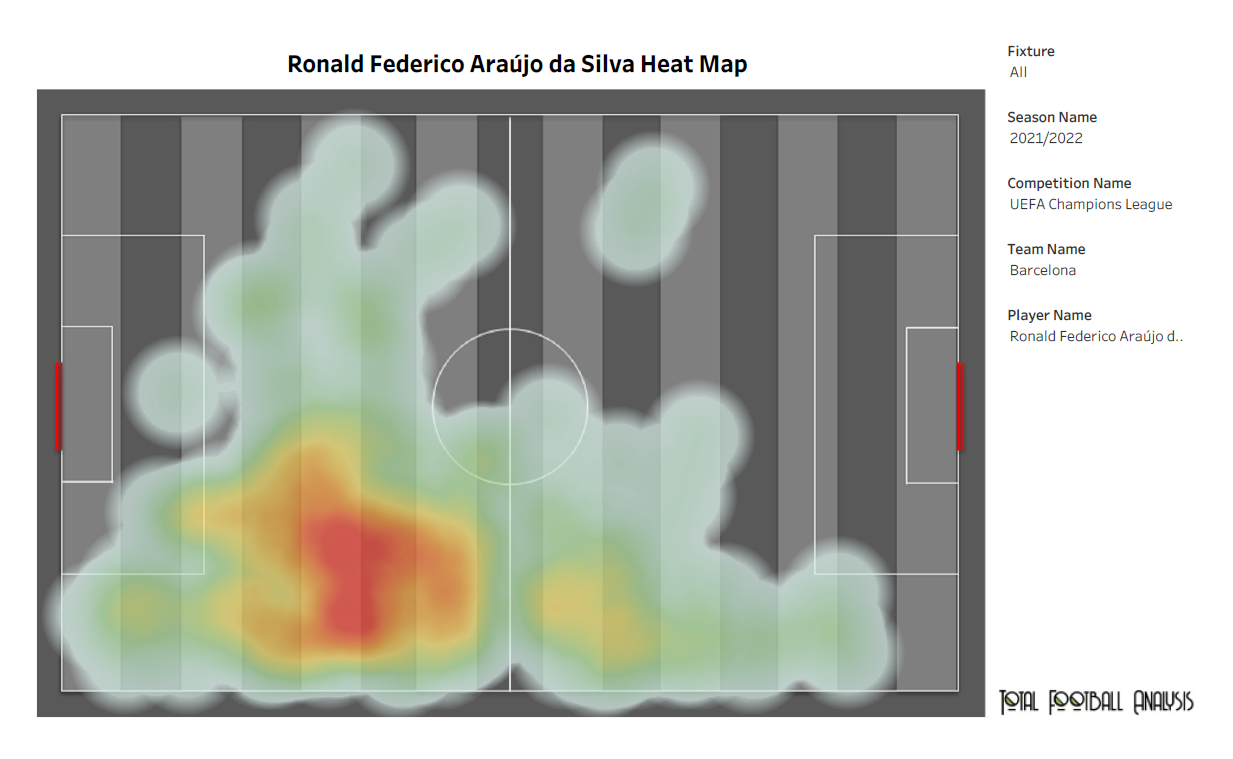 The above viz highlights Araujo’s areas of activity on the pitch. Araujo is a tall and imposing defender who utilizes his pace and power with good effect during duels. The 23-year-old usually operates as a right-centre-back. He is strongly right-footed, and as such, usually deployed as the right-centre-back in a back three or a back two system. Araujo is an aerial threat during set-pieces. He is adept at man-marking and can get around the opponents blocking him. Despite his young age, the Uruguayan displays impressive judgment and awareness. We can see in the above viz that he has been most active on the right wing in his half. 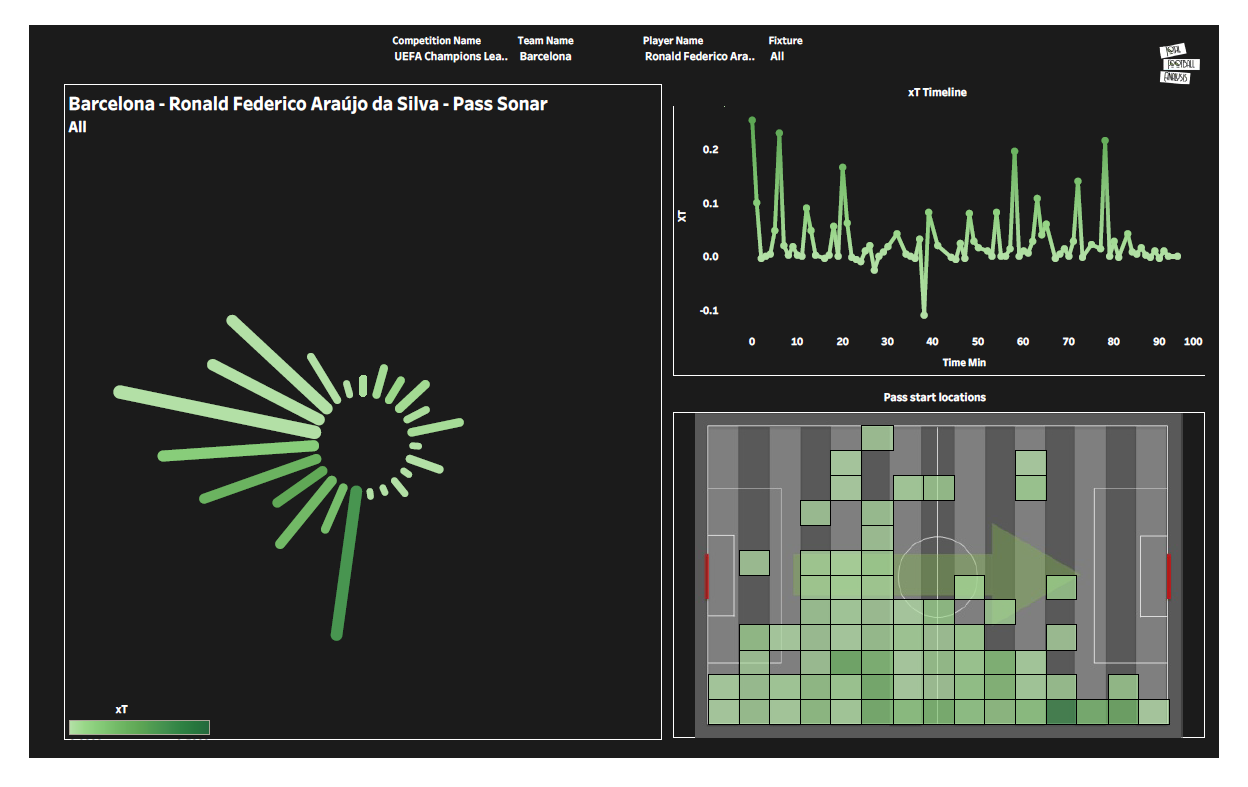 In the above viz, we can see the directionality of Araujo’s passes. The 23-year-old has managed to deliver threatening passes during both halves on average. We can see in his ‘pass start location’ that most of his passes have been delivered on the right wing.

Araujo has been an immense presence in Barcelona’s defense this season. He has immense potential to develop into an elite centre-back. Juventus would likely face some competition from multiple top European clubs if they are to pursue a deal for the 23-year-old.