Having lost Paulo Dybala and Federico Bernadeschi in the summer, Juventus are left with just two high-quality attackers, Federico Chiesa and Dusan Vlahovic. Moise Kean is most likely to leave the Old Lady as he is on loan currently from the Premier League side Everton. Other attackers in the squad like Kaio Jorge and Marley Ake lack the experience to propel the Bianconeri to their previous heights. One man that could drastically reinforce the left-hand side of the attack is Sporting Clube de Portugal’s Pedro Goncalves, and Juventus should try and bring him to the Allianz Stadium this summer. 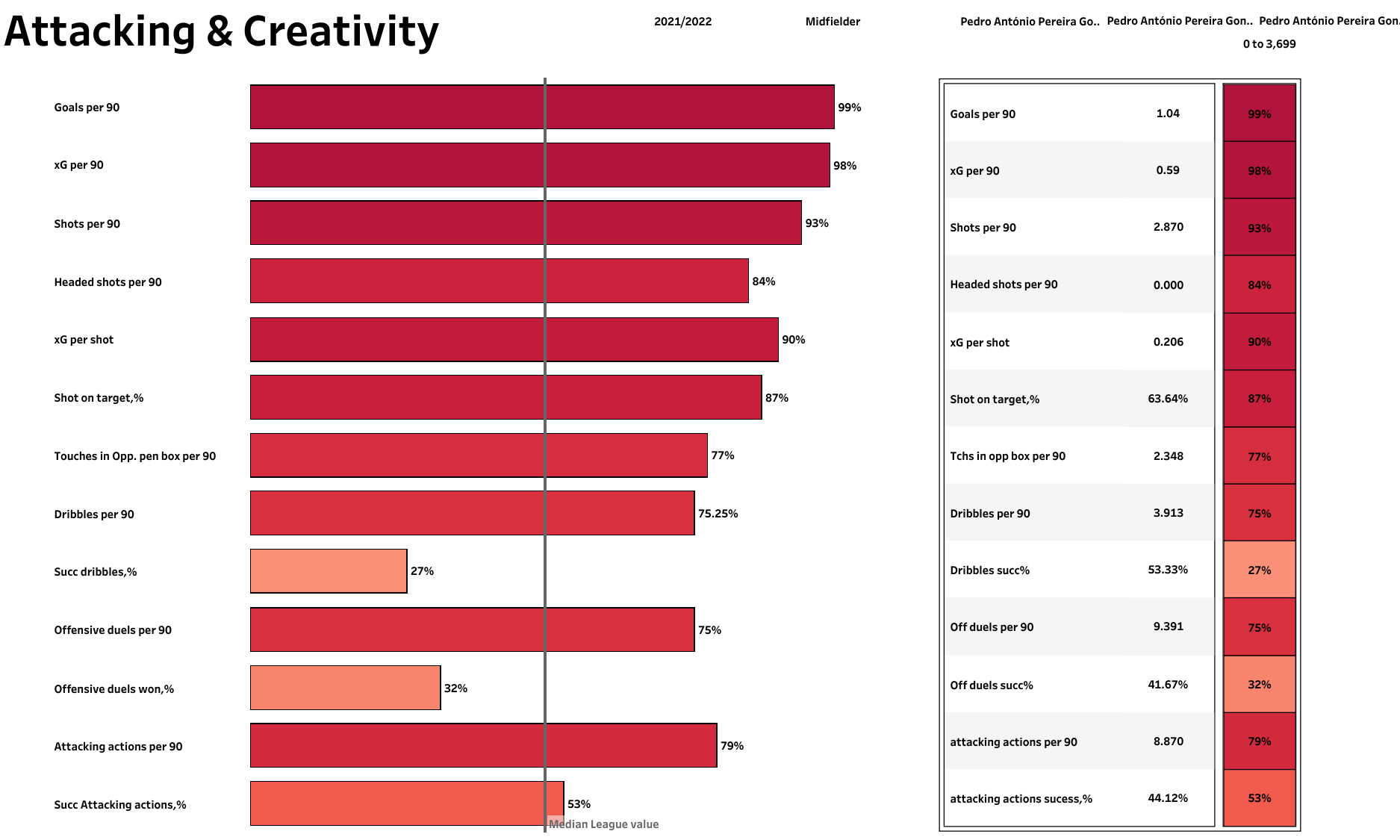 Goncalves made 41 appearances for Sporting CP last season, which included five in the UEFA Champions League. He played for 331 minutes on the pitch. He scored a remarkable four goals for the team or one every 82.75 minutes; two of these came against Borussia Dortmund. His rate of 1.04 goals per 90 placed him in the 99th percentile, and this was no fluke either, as his xG per 90 of 0.59 was enough to rank him in the top 2%. The winger took 2.87 shots per 90 and hit a ridiculous 63.64% of them on target and generated an xG per shot of 0.2, the latter ranking him in the upper decile. He attempted 3.9 dribbles per 90, though his success rate was only 53.3%. 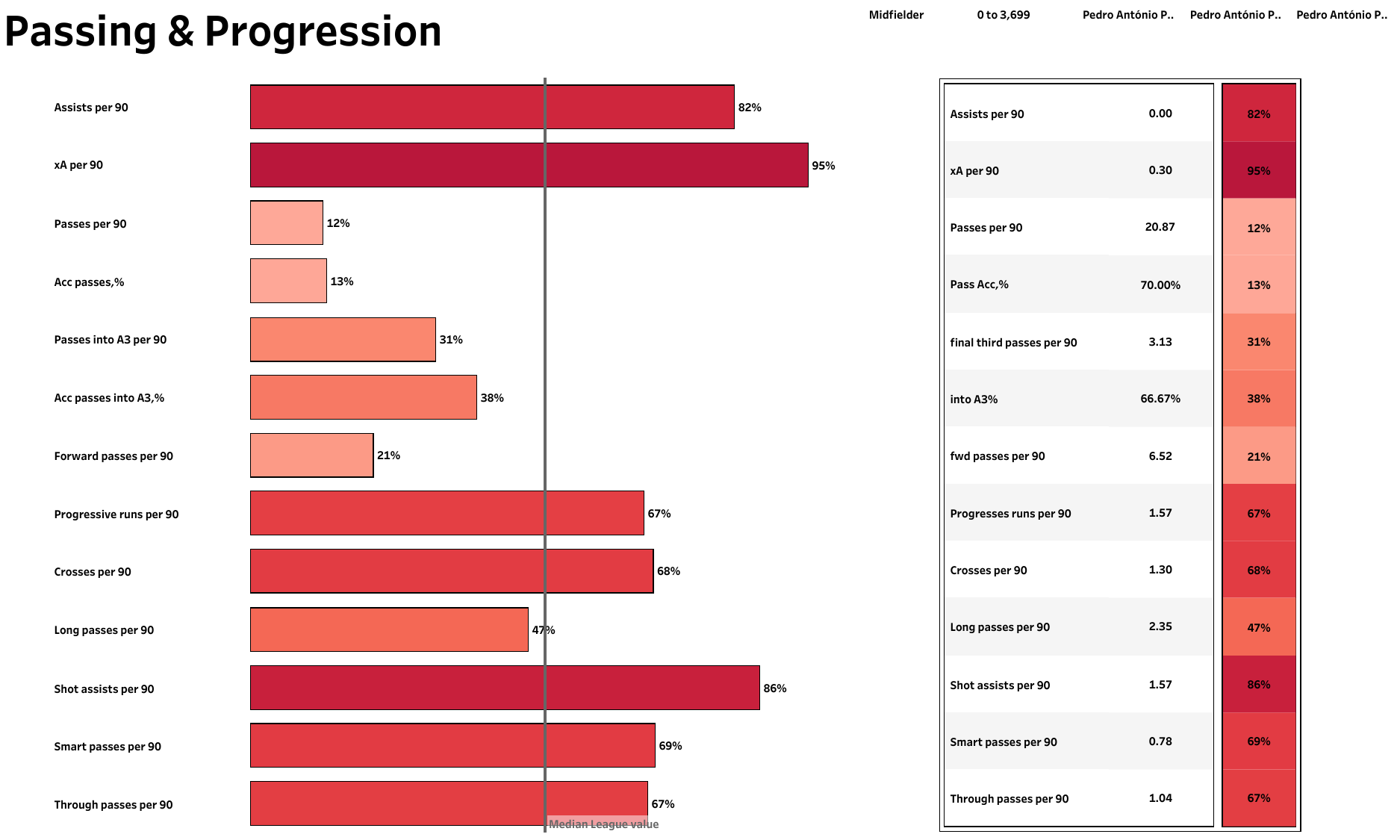 In addition to his four goals, Goncalves assisted twice, taking his goal involvement to once every 55 minutes. The number of passes he attempted per 90 and his overall pass accuracy was so low that he ranked in the bottom 13% or lower for both categories. He made 1.57 progressive runs per 90, 1.3 crosses per 90, 0.78 smart passes per 90 and 1.04 through balls per 90, which were all good enough for him to be put in the upper third. With 1.57 shot assists per 90, the Portuguese man was placed in the top 14% for this category. 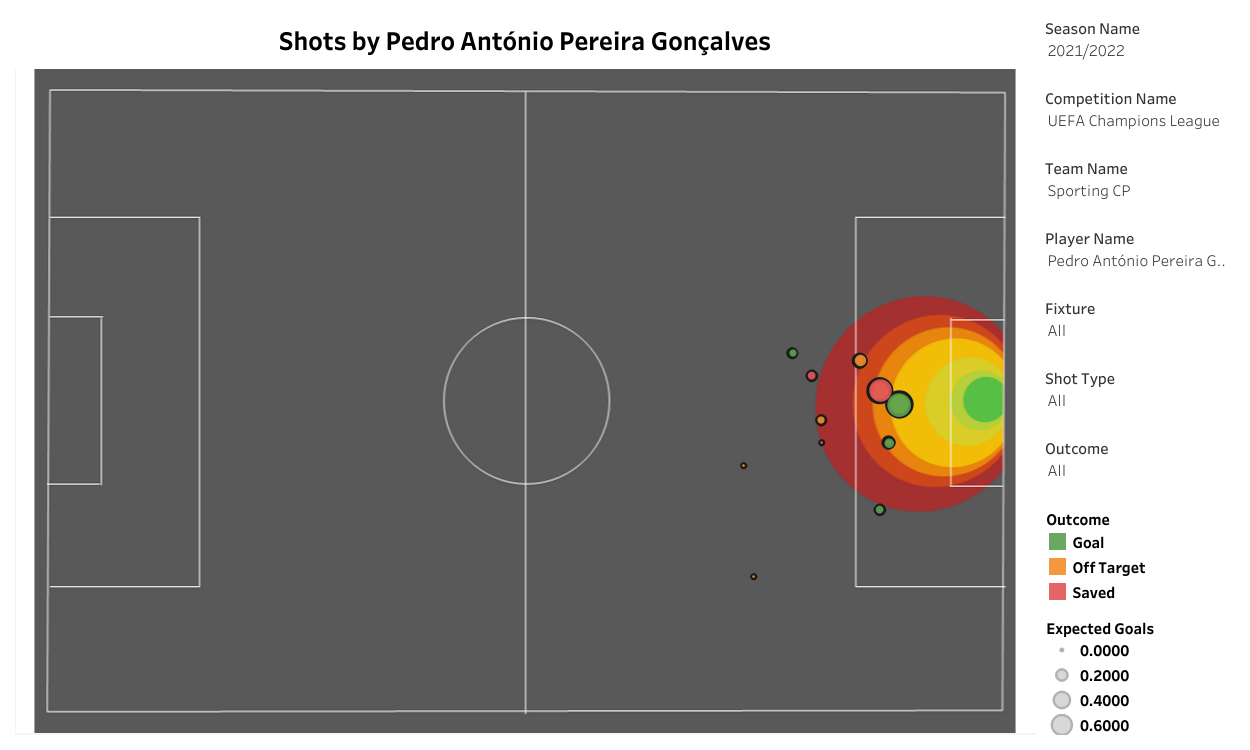 Three of Goncalves’ four strikes came from inside the oppositions’s penalty box. He missed one penalty and scored the other out of his two penalty kick attempts. Overall, he attempted 11 shots, of which six came from outside the box. Still, the winger tested the opponents’ keepers more often than not, and his conversion rate was a ridiculous 2.75 shots per goal scored in spite of the missed penalty. 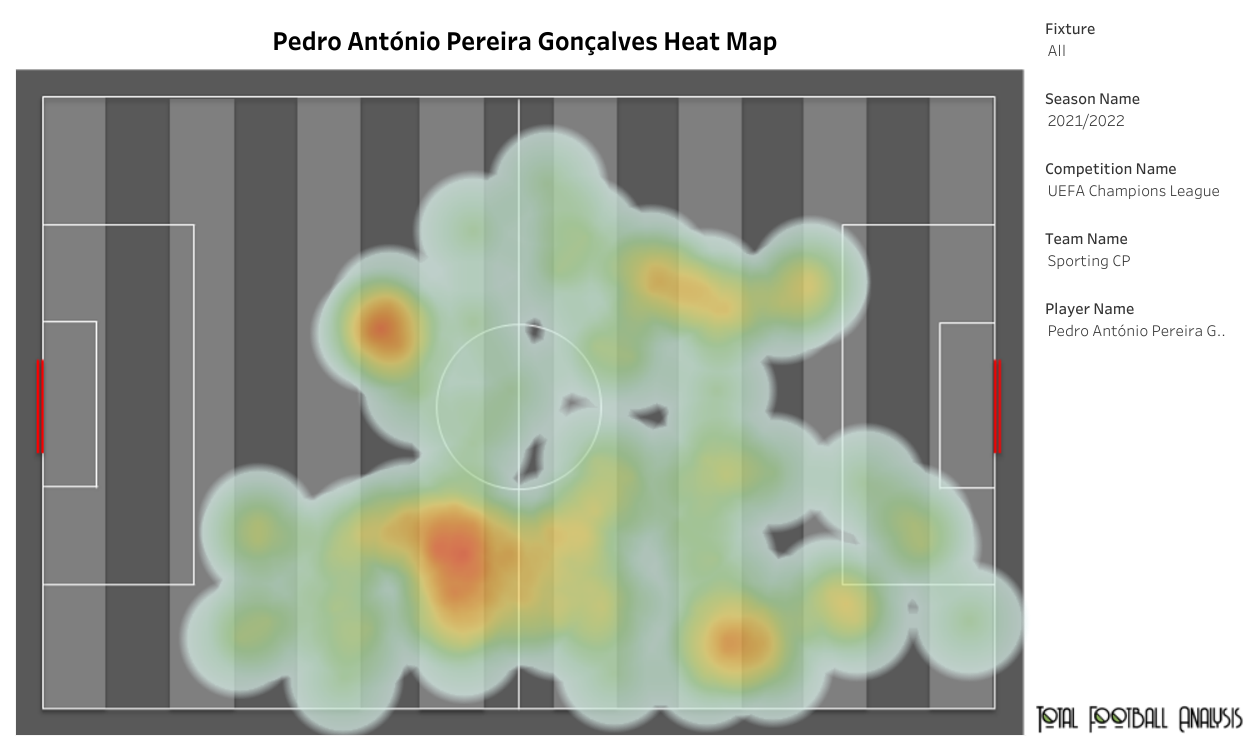 Goncalves was all over the pitch for Sporting CP during his time on the pitch. Despite being a winger, he spent quite a lot of time in the central areas of the field. He completed 2.5 key passes per 90, 4.44 progressive carries per 90, 4.68 shot-creating actions per 90 and received 5.28 progressive passes per 90. The Portuguese man also worked incredibly hard off the ball, attempting 27.5 pressures per 90, 2.78 tackles and interceptions per 90 and 1.11 blocks per 90.

Pedro Goncalves was one of the key men for Sporting CP last season in the UCL as the Lisbon giants progressed to the Round of 16 at the expense of Borussia Dortmund. With a very high efficiency and a tenacious work off the ball, he could be a good replacement for Paulo Dybala at the Allianz Stadium.