For several months now, Paul Pogba’s contract situation at Manchester United was unsolved, which led to many reports in the media linking him with a return to Juventus. And a few weeks back, it was officially announced by Manchester United that Pogba would be released by the club. And now, most sources claim that the Frenchman’s reunion with Juventus is a certainty after PSG apparently dropped interest in the 29-year-old, and Real Madrid signed Aurélien Tchouaméni instead of the experienced midfielder. With that in mind, let us take a look at whether Pogba’s reunion with Juventus would benefit both parties. 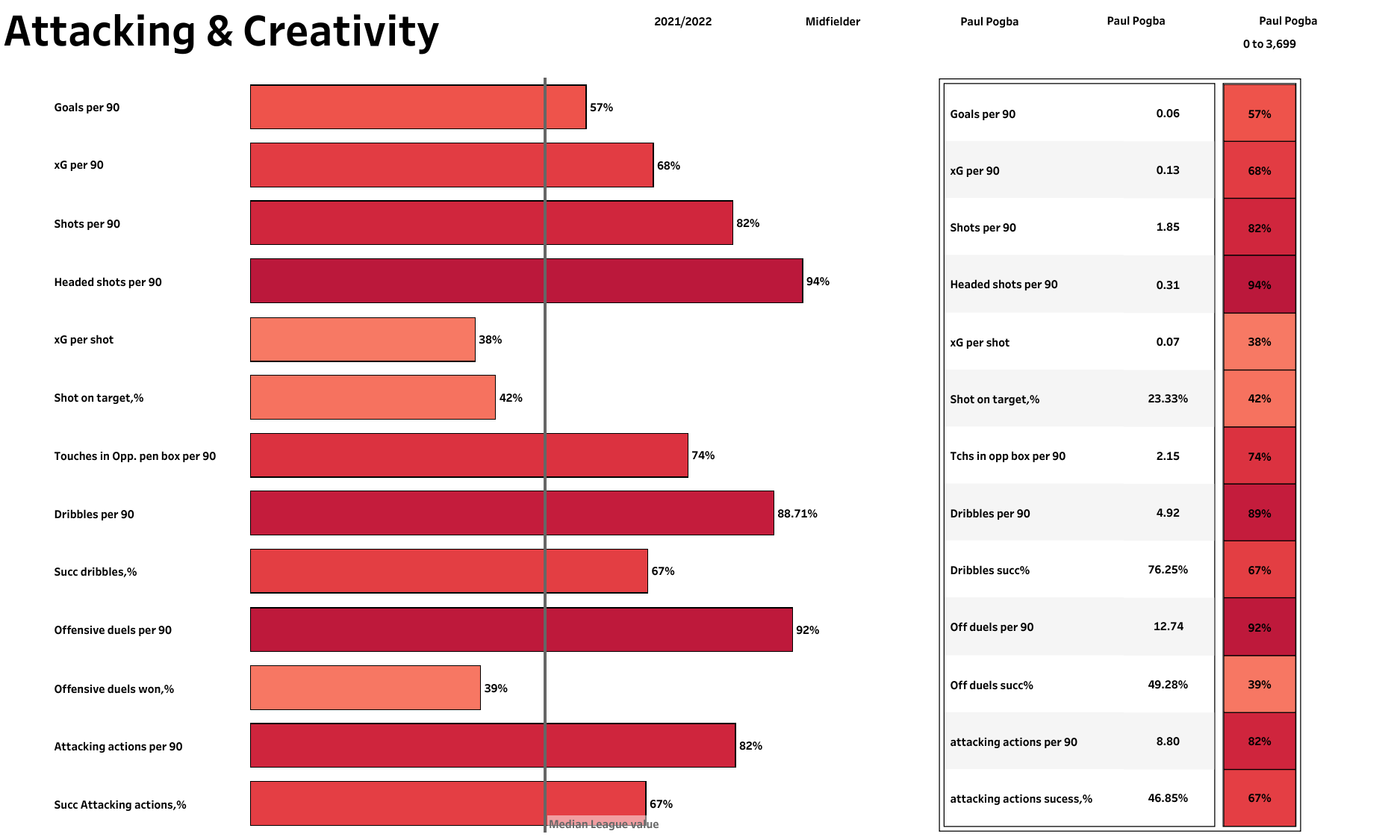 Pogba appeared in 20 of Manchester United’s 38 Premier League games last season, playing only 1,349 minutes due to lengthy hamstring and calf muscle injuries. Pogba’s scoring rate was only 0.06 per 90 as he underperformed his xG per 90 of 0.13. The midfielder took 1.85 shots per 90 minutes, 0.31 of which were from the head. The Frenchman was in the 94th percentile for headed shots per 90. He also tried nearly five dribbles every 90 seconds, with a success percentage of little more than three quarters. The Frenchman attempted 12.74 offensive duels per 90, putting him in the top 8% of midfielders. 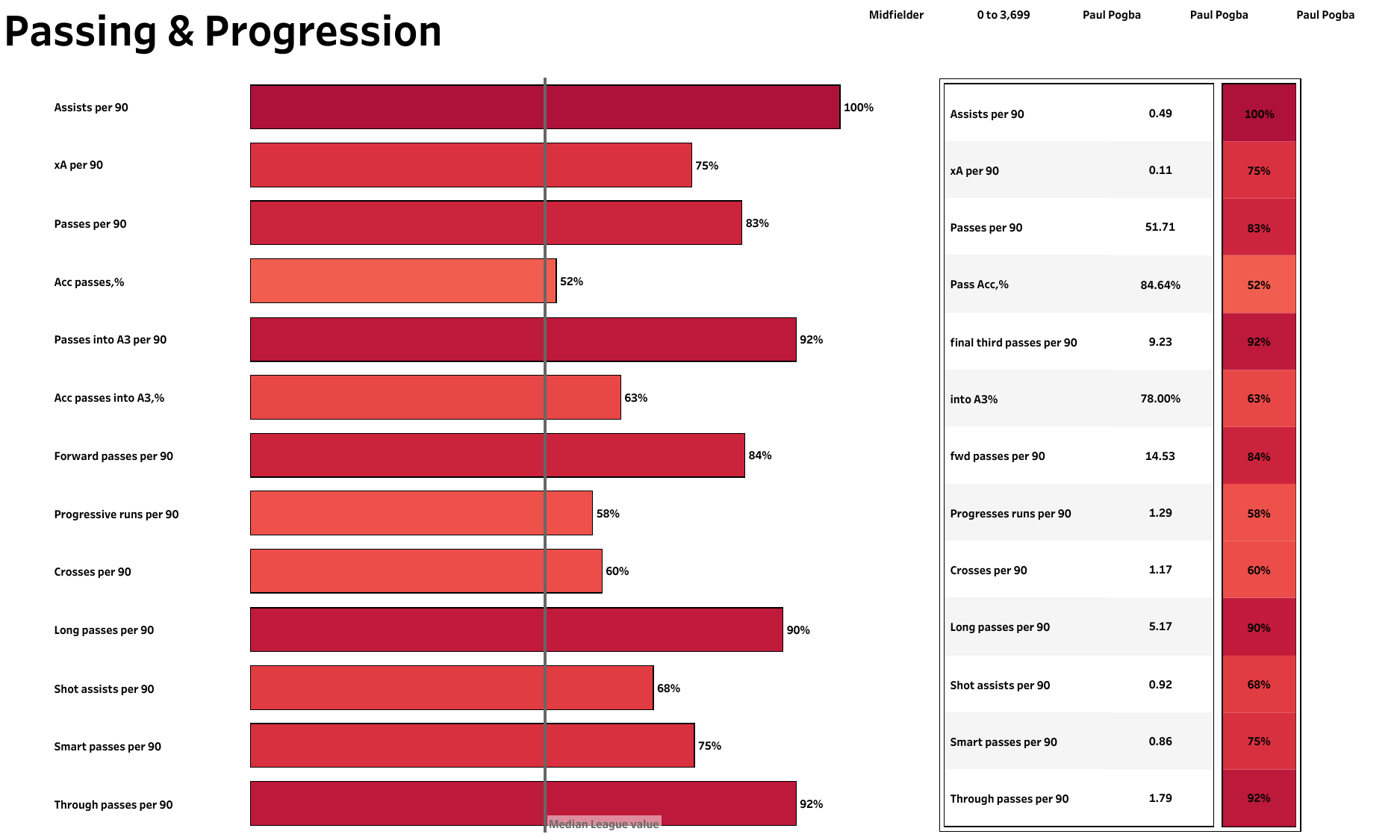 While Pogba struggled with his xG, the same cannot be said about his xA. Pogba had nine assists in the most recent Premier League season. The Frenchman did so at a rate of 0.49 per 90, which was not only much higher than the xA per 90 of 0.11 but also in the top 1% of this category (assists per 90). Pogba attempted 51.71 passes per 90 minutes, with an accuracy rate of 84.64%. He also completed 78% of his balls into the attacking third and 5.17 long passes per 90, putting him in the top decile among midfielders. The Frenchman ranked in the 92nd percentile among midfielders for through balls as he attempted 1.79 per 90. 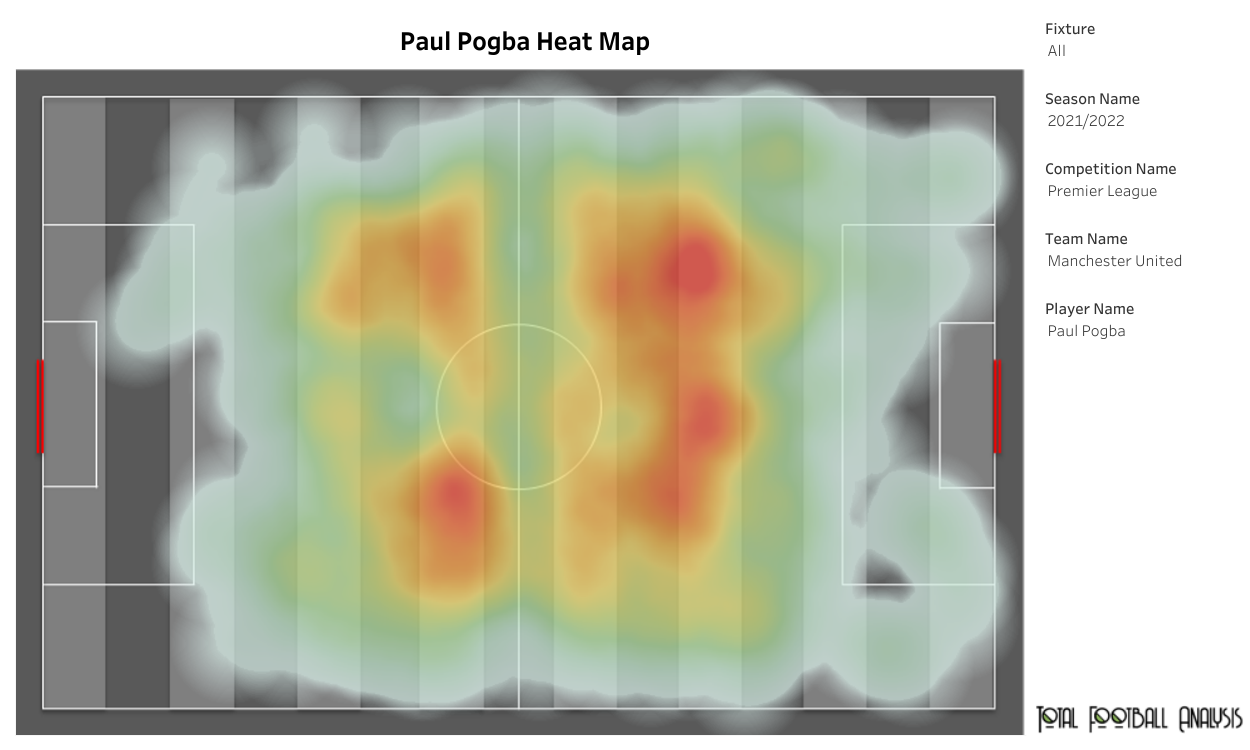 Pogba’s heat map from the 2021-22 EPL season is shown above. He was a key man in the opposition’s half, particularly between midfield and the penalty box. With the ball at his feet, Pogba executed 6.27 progressive passes per 90, 7.33 balls into the attacking third per 90, 1.73 passes into the opposition’s penalty area per 90, 6.47 progressive carries per 90, and 1.6 carries into the final third per 90. On the defensive end, he attempted 17.6 pressures per 90 minutes and 2.6 tackles and interceptions per 90 minutes.

If there is one word to describe Paul Pogba’s time at Manchester United from the 2016-17 season to the most recent 2021-22 campaign, it is ‘inconsistent‘. The Frenchman helped the Red Devils win the EFL Cup and Europa League in his first season on his return to Old Trafford, but Manchester United have not won any trophies since then, and Pogba has blown hot and cold in the midfield. However, not all of the blame should go to Pogba as the three managers during his tenure at Old Trafford – Jose Mourinho, Ole Gunnar Solskjær and Ralf Rangnick – did not utilise him properly either. Now, at Juventus, he would not only be returning to familiar territory but also have a coach that used him well in the form of Max Allegri.