It has been reported that Juventus are keen on bringing Paul Pogba back to Turin. Following his return to Manchester United in 2016, things have not gone well for the French international. The 29-year-old’s time at Old Trafford has not been as successful as his time with the Bianconeri. During his previous spell with the Old Lady, Pogba made 178 appearances, winning four Serie A titles along the way. Many fans believe that the Frenchman played his best football during his time in Turin.

Despite United’s struggles on the pitch, Pogba is still considered by many as one of the best central midfielders. The 29-year-old has been attracting a lot of interest from top European clubs, including PSG, Real Madrid, and Juventus. However, many claims suggest that Pogba is set on a reunion with the Bianconeri. Juventus are reportedly in the market for a midfielder as they look to add a creative spark in the midfield, and the French international fits the bill. His current deal with Manchester United is set to expire in June, and currently, there is no agreement in place for a contract extension.

Juventus are currently rebuilding their squad, and adding Pogba could work out well for both parties. Pogba recently expressed his frustrations in an interview, stating that it is hard for him to be consistent when his position and role are changed regularly. This season Pogba has made 23 appearances, scoring once and laying nine assists. The French international has played as part of a midfield-pivot, an attacking midfielder, and even as a forward on the left and right.

Let’s take a look at some stats to gauge whether he could become the creative spark that Juve are seeking. 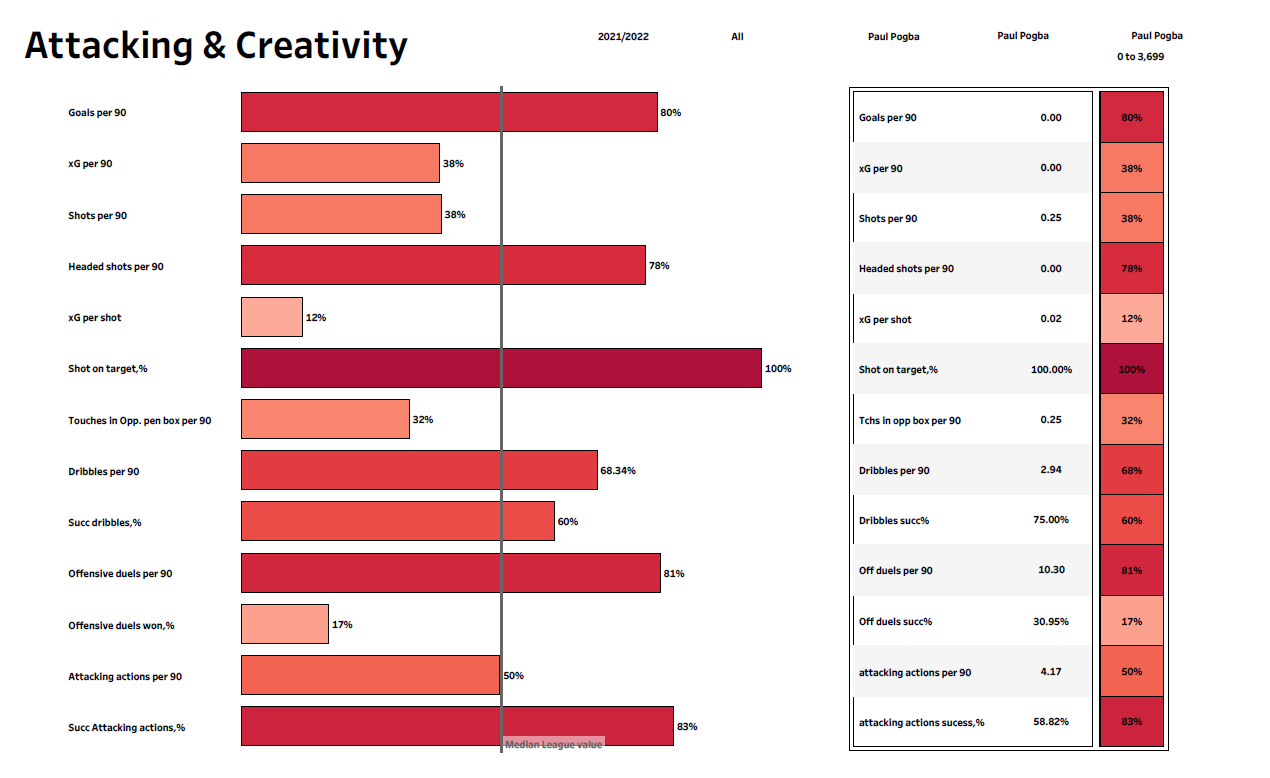 In the above viz, we can see Pogba’s attacking & creativity stats in the Champions League. His most notable stats are shot on target accuracy, offensive duels per 90, and successful attacking actions rate. Pogba is known for his versatility as he is capable of forming the link between the defense and the attack. The French international’s passing range is impressive, and he can make penetrative passes thorough or over the defense. The 29-year-old remains strong under pressure and uses his frame well to protect the ball. 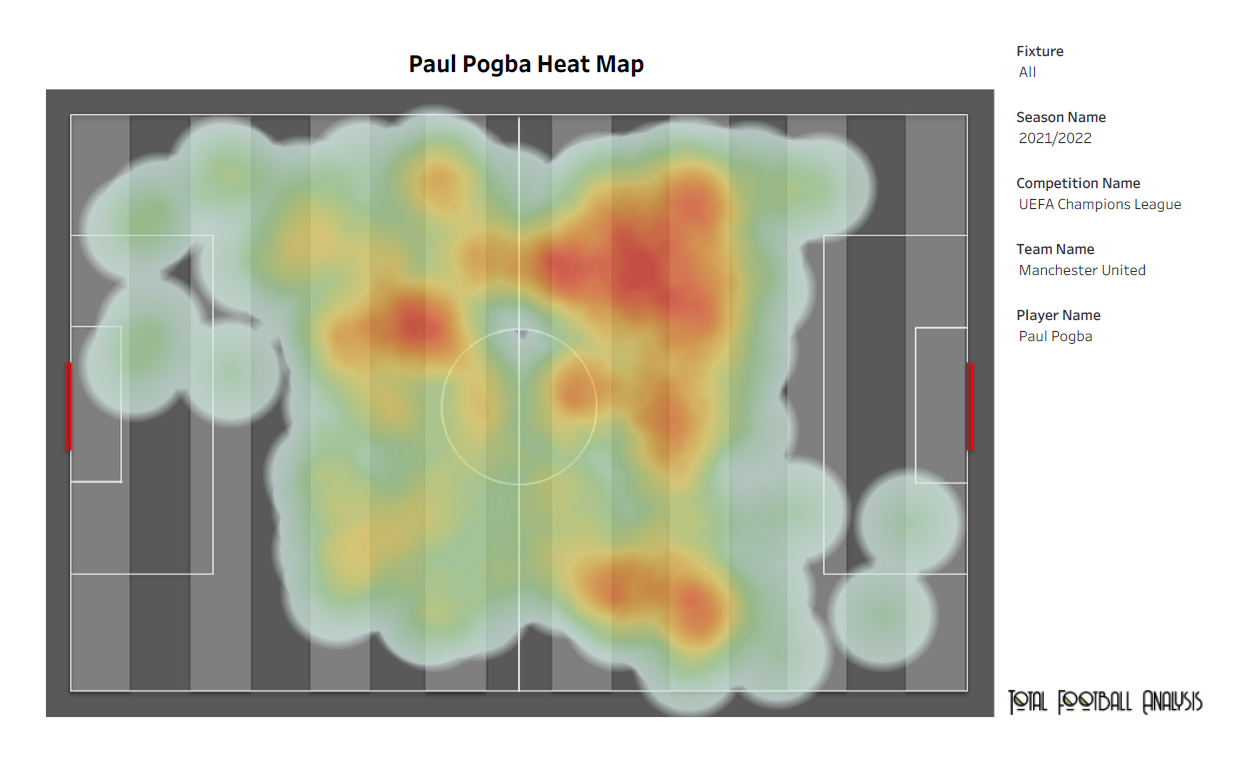 The above viz highlights the areas of the pitch where the midfielder is active. We can see his heavy presence in the opponent’s half. Pogba utilizes his physical attributes to drive his team forward, both with and without the ball operating almost as a box-to-box runner. He can contribute during the attack as well as during the defensive phases. This season Pogba has been deployed on central, left and right midfield. In the recent games, the 29-year-old has operated as an attacking midfielder as well, further indicating his versatility. 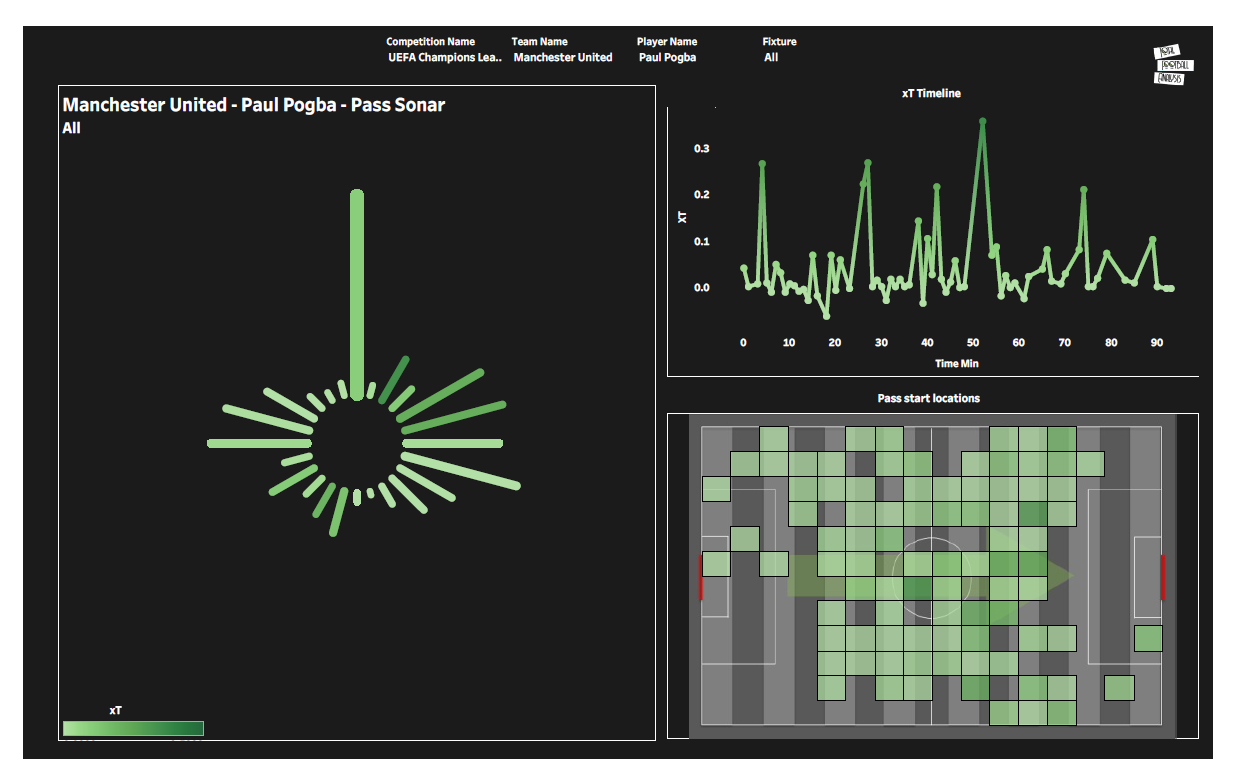 We can see Pogba’s directionality of passes in the above viz. The French international’s vision and long-range passing are some of his best attributes. We can also see that he has been threatening with his passes in both halves. Pogba’s ‘pass start location’ highlights that he has made threatening passes near the centre and in the opponent’s half.

Pogba could provide an additional dimension to the Juventus midfield that currently lacks creative spark. The midfielder’s vision and range of passing are one of the best in Europe. A possible reunion could work out well for the 29-year-old, allowing him to re-capture his previous form with the Old Lady.