Ever since the announcement of Giorgio Chiellini leaving Juventus at the end of the season, the Old Lady have been searching for a replacement centre-back. Several names have been touted, including Monaco’s Benoit Badiashile and Manchester City’s Aymeric Laporte. While the former would cost a lot to bring him out of the Principality, the latter is unlikely to happen. However, the Turin-based club should target centre-backs who are outcasts and could perform in the Serie A as well as in the Champions League. One such outcast is Manchester City’s Nathan Ake. Here, we will analyse whether the 27 year old would be a good fit for the Bianconeri. 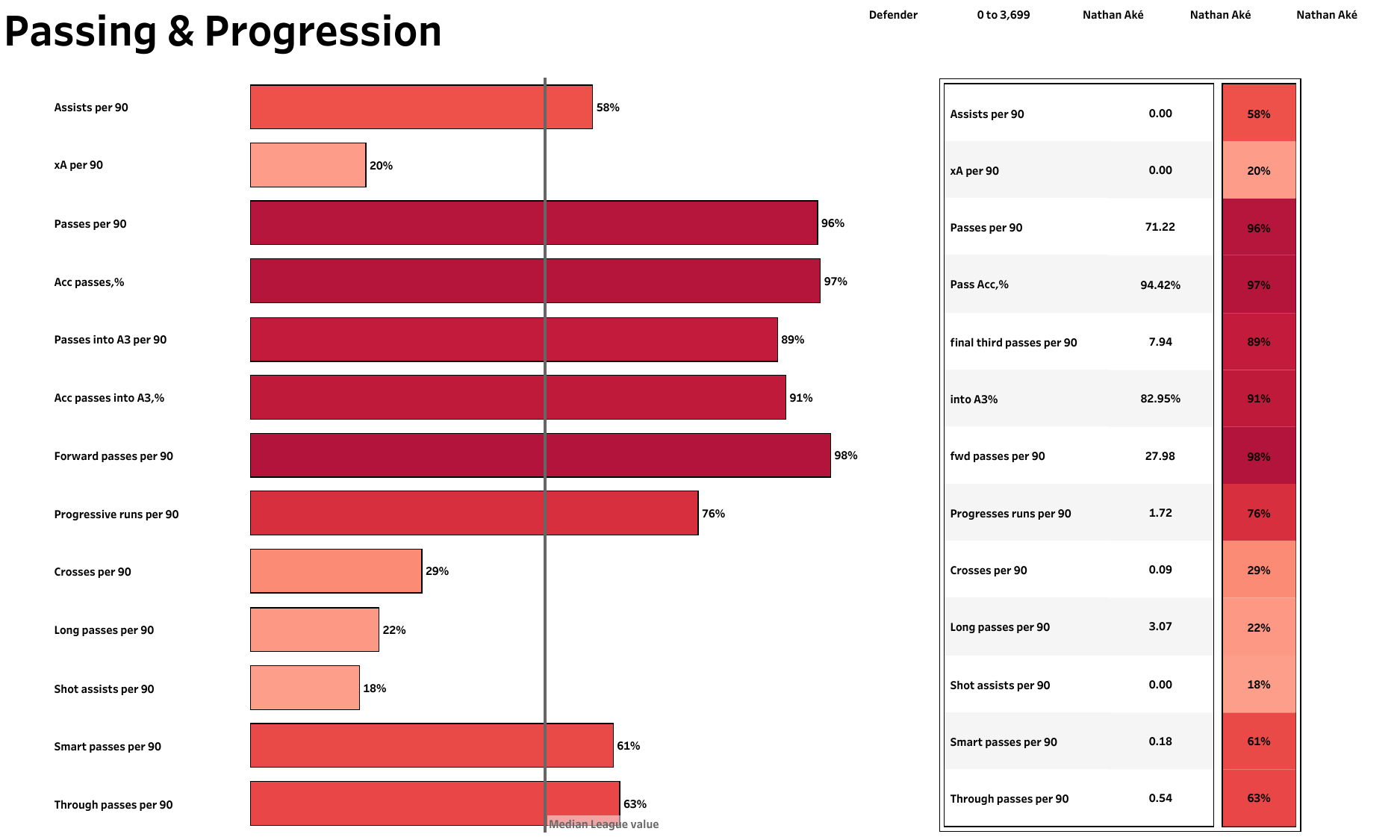 Ake has played less than 950 minutes in the Premier League for Manchester City this season (just 27% of the available minutes). Ever since the arrival of Ruben Dias and the unexpected revival of John Stones, Ake has found himself behind these two centre-backs and Laporte in the pecking order. But whenever he has played, he has performed for Pep Guardiola’s team. The Dutchman has attempted a whopping 71.22 passes per 90 at an astonishing accuracy of 94.42%. What is even more impressive is that his pass accuracy into the attacking third comes in at a shade below 83%. However, expect these numbers to come down slightly if he plays regularly and in a system that does not prioritise possession. 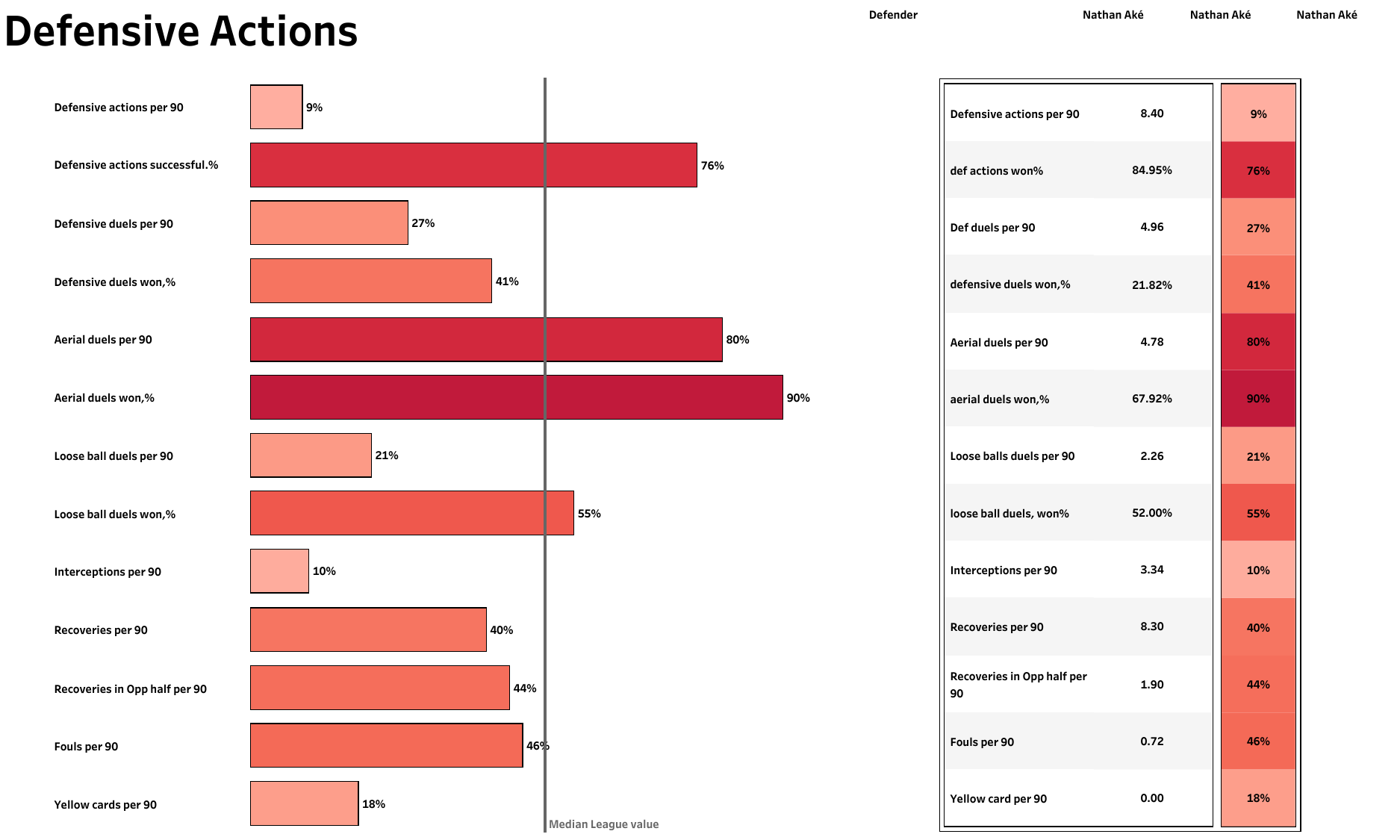 Ake attempted only 8.4 defensive actions per 90 in this recently concluded Premier League season for Manchester City. However, the Dutchman came out successful in nearly 85% of these. Similarly, Ake attempted 4.78 aerial duels per 90 and succeeded in 68% of them despite standing at just 180 cm, which is below the median height for a central defender. Additionally, the Dutchman recovered more than half the loose ball duels he contested. 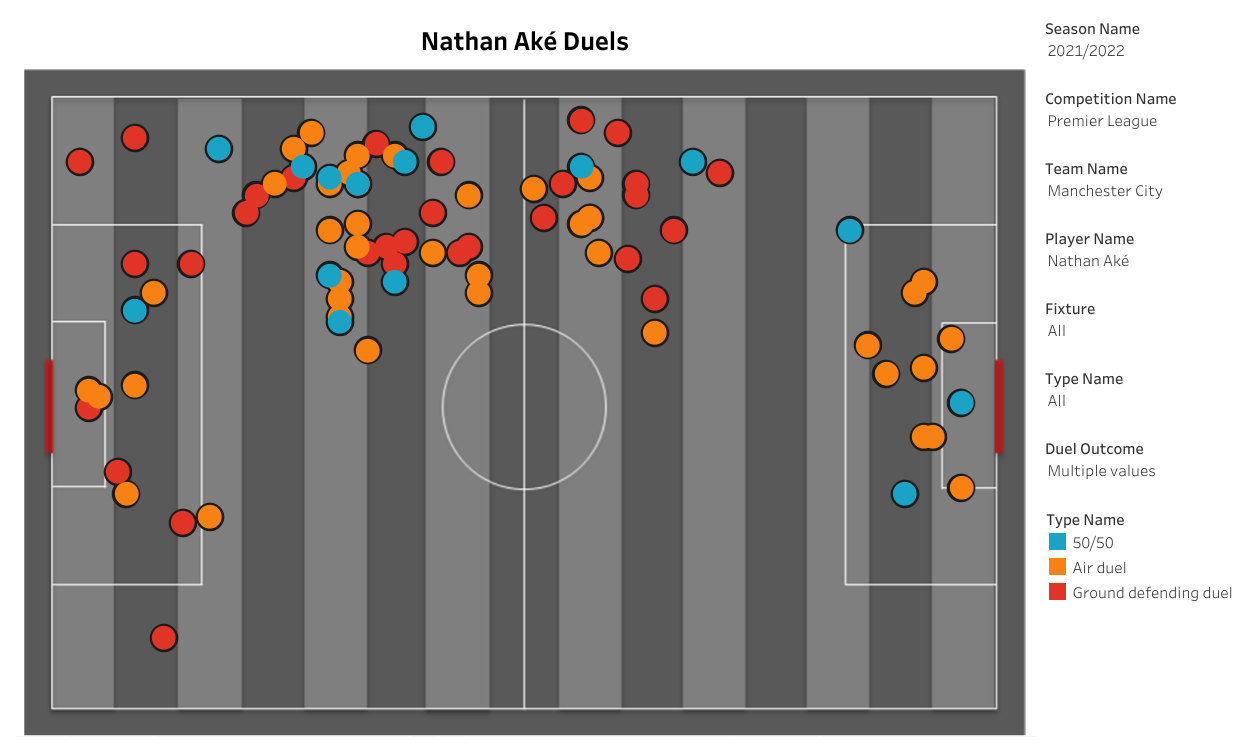 Shown above are the locations of duels contested and won by Ake for Manchester City in the 2021-22 Premier League season. During his limited playtime, Ake managed to make 7.57 recoveries per 90, 6.8 pressures per 90, 3.2 tackles and interceptions per 90, 3.01 clearances per 90 and 1.17 blocks per 90. Most of his winning duels came on the edge of the defensive third and midfield. The Dutchman also won a variety of duels, including 50/50s, aerial and ground duels. Going forward, Ake completed 3.01 progressive passes per 90, 5.15 passes into the final third per 90, 7.18 progressive carries per 90 and 1.26 carries into the attacking third per 90.

With this being a World Cup year, Nathan Ake will want to play a lot more games ahead of the 32-team tournament in November. And with Leonardo Bonucci 35, Ake could possibly join Juventus this summer, at least on loan.