It has been reported this past week that Paulo Dybala will not be renewing his contract with Bianconeri. The Argentine’s contract situation has been a cause for concern for Juventus over the past year, and an agreement couldn’t be reached between Dybala and Juventus hierarchy. As a result, he will be leaving Turin as a free agent. The Old Lady are reportedly on the lookout to replace the 28-year-old, and they are monitoring the situation around Liverpool ace Mohamed Salah.

The Egyptian international, whose contract expires in 2023, has been linked with a move to Juventus in the past few days. Liverpool have been trying to tie the 29-year-old to a new deal, but so far, they have not succeeded. According to some reports, Juventus manager Massimiliano Allegri sees Salah as a suitable replacement for Dybala. Salah is considered by many as one of the best players in the world currently. Since his move to Anfield in 2017, he has put up remarkable performances and numbers every season, winning the Premier League and the Champions League along the way.

The 29-year-old is having yet another successful campaign with the Reds, as they are currently second in the Premier League, one point behind leaders Manchester City. Liverpool have also moved to the quarter-finals of the Champions League and are considered among the favorites to win the title. On an individual front as well, the Egyptian international has been excellent. He has scored 20 goals and registered 10 assists in the Premier League. Salah has also found the net eight times in eight Champions League appearances this season.

While there is little doubt that Salah could make a huge impact at Turin, any possible deal would see the Old Lady pay a huge compensation to Salah. In addition, Liverpool would demand a hefty transfer fee as well if they allow the Egyptian to leave.

Let’s take a look at some stats to gauge Salah’s impact this season. 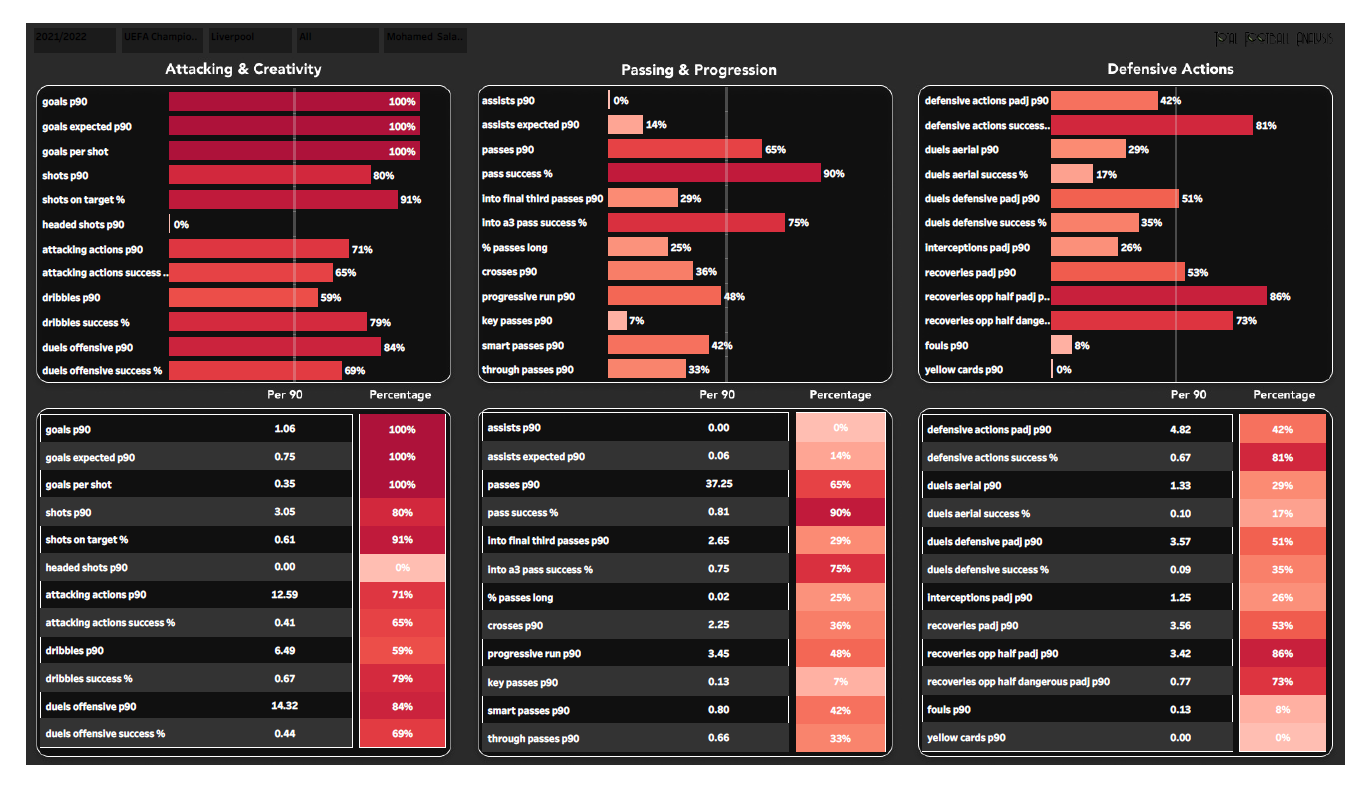 In the above viz, we can see Salah’s overall stats in the Champions League. Salah has excelled in attacking & creativity metrics, with the majority of his stats surpassing the league median. He has some of the best attacking stats in the Champions League, with the most notable among them being goals per 90, xG per 90, and goals per shot. Salah has averaged 1.06 goals with an average xG of 0.75 per match. The 29-year-old excels at dribbling, and he is one of the best in terms of running past the defenders. He possesses explosive pace, which he utilizes to great effect. 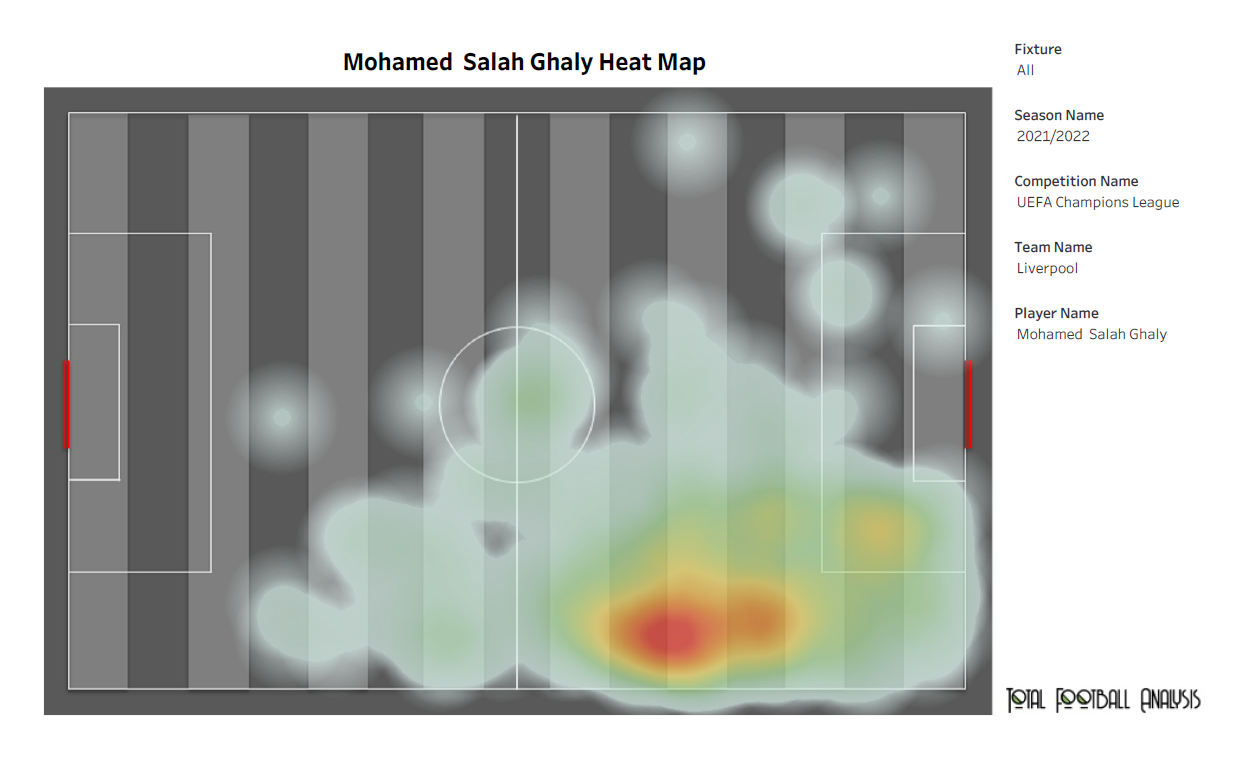 The above viz highlights Salah’s area of activity. The Egyptian is versatile and can operate as a winger, second striker, or lone forward. At Liverpool, Salah has become one of the best inside forward who focuses on shooting and scoring goals rather than creating. He dribbles inside from the wide areas on the right or looks to make runs off the ball to get in behind the defenders and receive passes. We can see that he has mostly been active in the half-spaces near the touchline on the right wing. 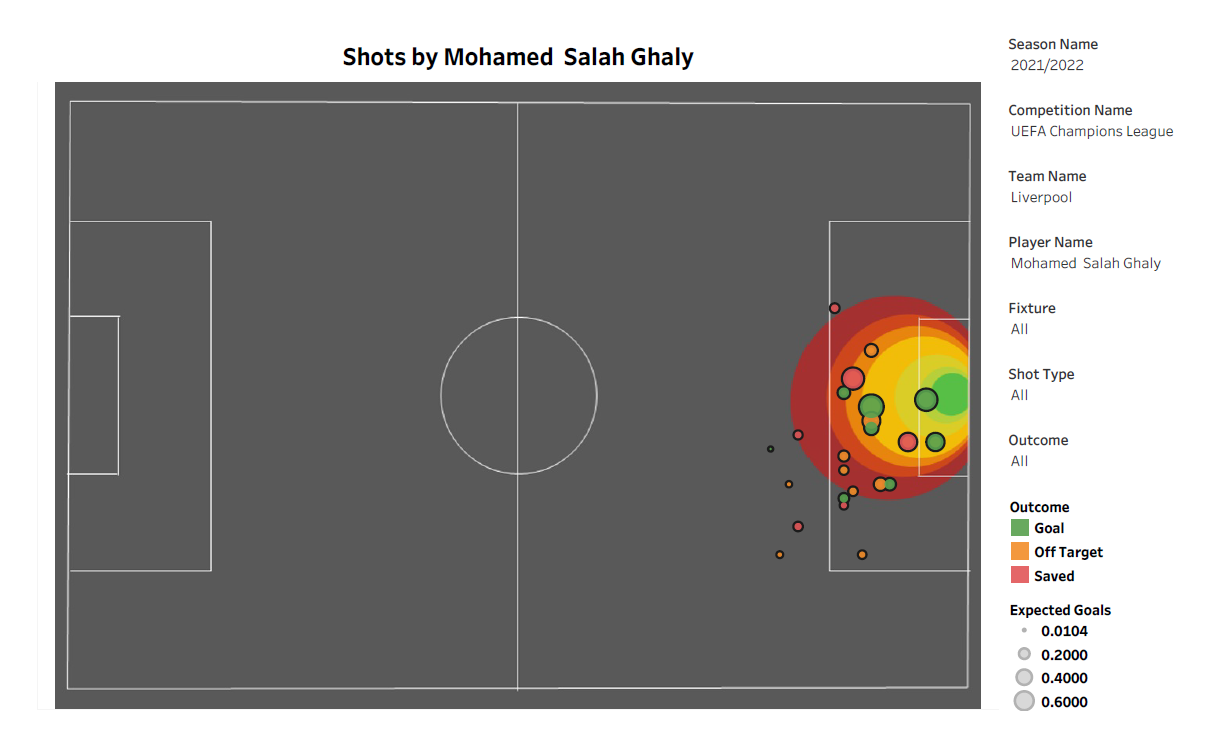 We can see Salah’s shot map in the above viz. The Egyptian has scored most of the goals from inside the opponent’s box. Starting often from a narrow position, Salah looks to shoot the first time or after a short dribble. The 29-year-old displays excellent spatial awareness, which he utilizes going forward. He is impressive in finishing with both feet as well.

Over the years, Mohamed Salah has transformed into a world-class player. There is no doubt that he would succeed in Turin, however, any possible deal for the Egyptian would be difficult and hefty.