The Allianz Stadium hosted a controversial affair between two sides competing at the top end of Serie A, with Juventus facing up against Atalanta. This tactical analysis will break down the game that ended as a 2-2 draw.

Juventus, led by Maurizio Sarri, are coming off the back of a disappointing display and defeat against AC Milan, after a hot streak of form before that. In that game, they were missing a couple of their key players in the starting XI, namely Matthijs de Ligt and Paulo Dybala, but in that match, they alsseveral key errors defensively. Sarri’s tactics were not solid enough in that match-up as the defence had little to no cover from the midfield regardless. We will discover in this analysis if he altered this in any significant way.

Atalanta, manged by Gian Piero Gasperini, have also been in a rich reign of form since the resumption of Serie A football. Gasperini, who has a history with Juventus as a former youth graduate at the club, lost his most recent affair with them back in November, losing that game 3-1, which was during a period of struggle for the Nerazzuri. Atalanta are coming off the back of twelve consecutive victories in all competitions, scoring four or more in five of those fixtures. This analysis will take a deeper dive into this game, and how Juventus managed to put an end to this winning streak that Atalanta had put together.

Juventus lined up in a 4-4-2 formation, which looked to utilise their strengths down the wings and participate in passing triangles which we have seen become a staple within Sarri’s tactics. They were fronted by Cristiano Ronaldo and Paulo Dybala as the two centre-forwards. Dybala’s return was welcome, and it was hoped that he would introduce a more present link between the midfield and attack. The wide-midfielders were Blaise Matuidi and Federico Bernardeschi, and by choosing Matuidi as a left-midfielder, Sarri was anticipating Papu Gómez to drift out towards the right wing, as he has done in recent matches, so the Frenchman was there to provide extra cover.

Regarding the midfield, Sarri went with Rodrigo Bentancur and Adrien Rabiot as the central midfield pivot, with Sarri hoping they would perform recoveries in the centre and progress the ball with their passing ability. The back four consisted of Danilo, Matthijs de Ligt, Leonardo Bonucci, and Juan Cuadrado, opting to bench Daniele Rugani following the return of de Ligt from suspension.  Wojciech Szczęsny kept his place as the goalkeeper. 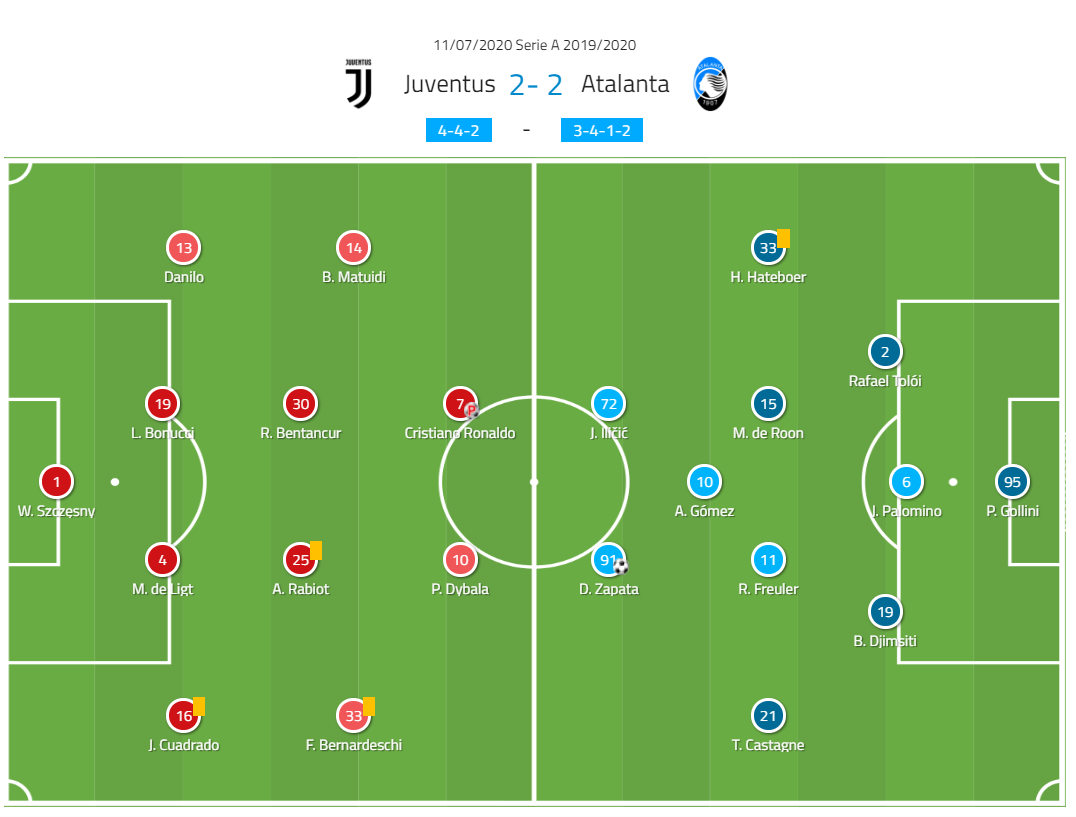 Atalanta set out in a 3-4-1-2 formation which looked to utilise width in their attacks and went forward at a quicker tempo than they typically would. The two strikers were Josip Iličić and Duván Zapata and were accompanied by  Papu Gómez in the #10 role, with Iličić starting his first game since early March.

The wing-backs in this game were Timothy Castagne as left-wing-back and Hans Hateboer as the right-wing-back, with Robin Gosens missing out in this game, maybe because of speculation regarding his future at the club, and links to Inter Milan. The central midfield pivot was Remo Freuler and Marten de Roon, both capable in the transitional phase of play especially. The back three consisted of Berat Djimsiti, José Luis Palomino, and Rafael Tolói, with Pierluigi Gollini in between the sticks.

Sarri’s side struggled to keep possession for a sustained period in this match, which is something they also struggled with in their last match against Milan. Particularly at the beginning of the game, they struggled to warm-up into the game and failed to create much of any significant value. They finished the first-half with an xG value of 0.24, which is not good enough for a side that sits at the top of the league.

In this game, whenever Juventus approached the final-third or made their way into the opposition’s box, they were pressed wide out of a goalscoring opportunity. Both of Juventus’ forwards visibly struggled to get into a goalscoring opportunity, due to the press that Atalanta deployed across the entire pitch. Additionally, both of Sarri’s starting wide-midfielders did not push up high enough often, and as a result, the forwards had a lack of support, which led to more direct long-balls played in the second half. Both Matuidi’s and Bernardeschi’s average positions in this game were in their own half, which is indicative of the roles they were given. 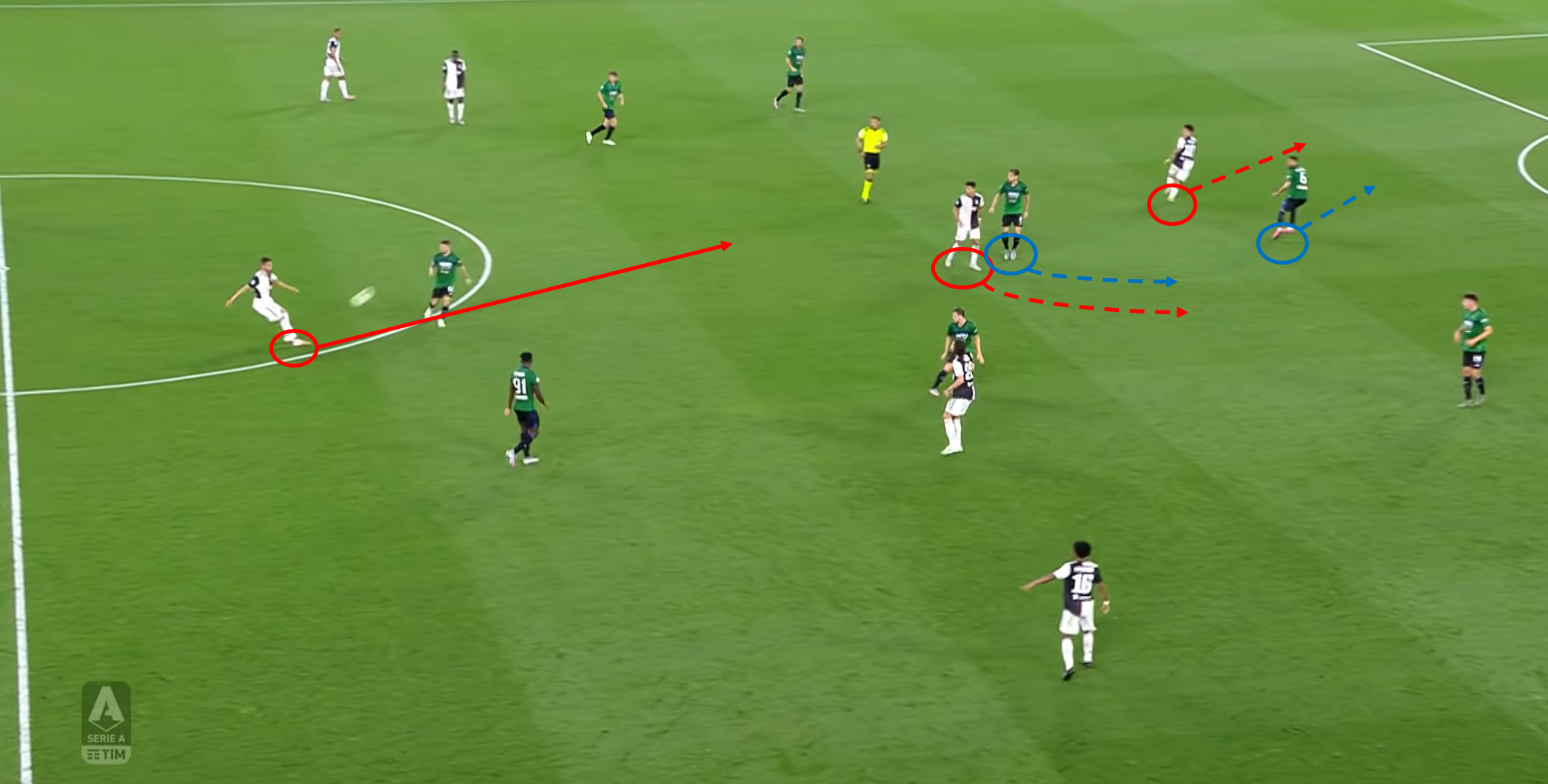 In the above analysis, we see Bentancur attempt a ranging pass into the path of Dybala in behind the Atalanta defence. Ronaldo is prepared to make run into the box for the cut-back, but other support from Juventus players is limited. 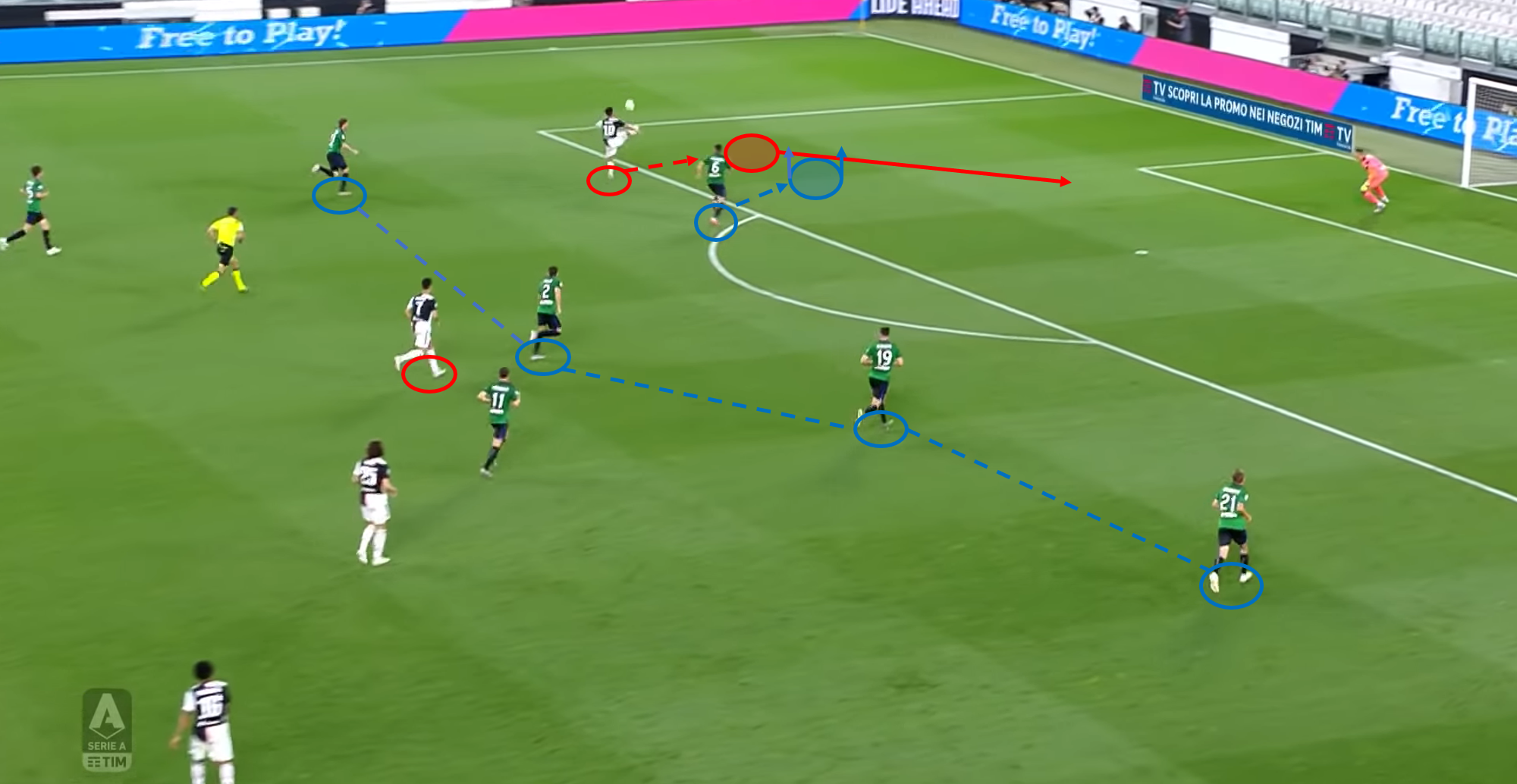 When Dybala brings the ball down, Palomino is in a favourable position to defend the ball. He is cutting off the angle that Dybala can shoot from, forcing him into a rushed decision. Simultaneously, Dybala has no options in support, with Ronaldo not approaching the attack with any urgency.

Just as in Juventus’ last match against Milan, their greatest chance from open-play was a result of a bright ball played over the top from Cuadrado into the path of Ronaldo. Be it a lack of confidence, poor coaching, or poor form, Sarri’s side were incapable of stringing together short passes to bypass pressure which was laid upon by Atalanta. This is what led to the likes of Cuadrado attempting more direct lofted passes. In this game, Cuadrado completed two deep completions, thirteen progressive passes, and five defensive duels to make for a good effort overall here. 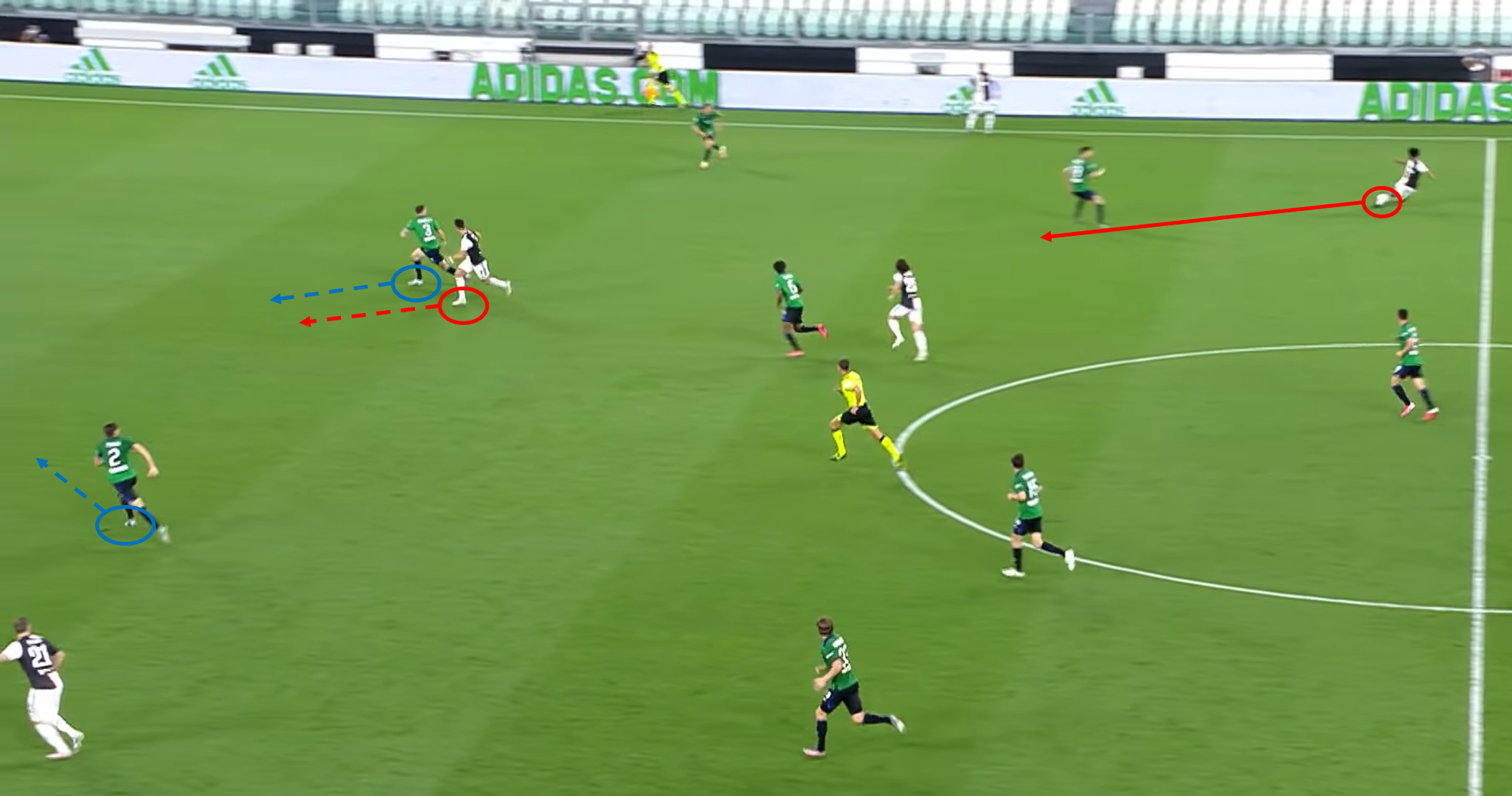 Above, we can see Cuadrado notice the run of Ronaldo in behind the Atalanta defence. Two Atalanta players have clocked on at this point and are ready to run with Ronaldo and keep the pressure on him. 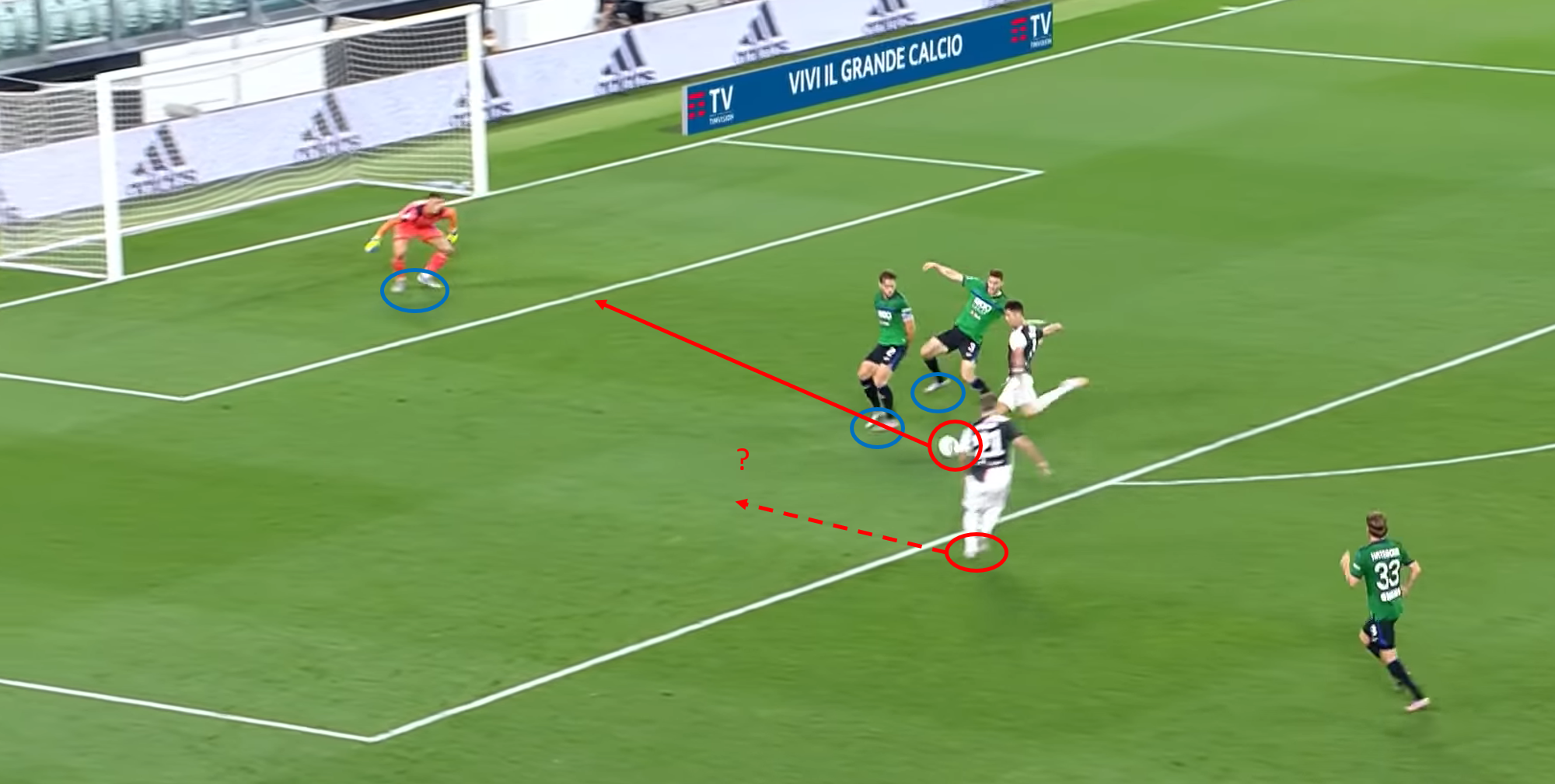 Ronaldo takes a touch and shifts the ball to the left and prepares to shoot on goal, but it is saved by Gollini. It is worth noting that if he were to have held up the ball, it would have made for a good goalscoring opportunity for Gonzalo Higuaín.

Both of Juventus’ goals were scored via two Ronaldo penalties in the second half. They were both given for handballs inside the box, and under the new handball rule, both penalties were lawfully awarded. Whether or not this rule is fair and justified is another debate well worthy of discussion. Ronaldo finished both penalties with aplomb, which takes him to eleven penalties converted out of eleven attempted this season, which can only be praised. What cannot and should not be praised, however, is Juventus’ open play efforts in this match as they were legitimately poor, struggling to create anything noteworthy, despite having the personnel capable enough.

In the first half especially, Atalanta’s forward found it genuinely easy to work around the Juventus defence. We saw excellent hold-up play from the two centre-forwards, and even 5ft 4 Gómez was able of holding his man off in this match. Partially due to the extra defensive cover that Matuidi provided down Atalanta’s right-wing, Gasperini’s side favoured attacking down the left flank, with 45% of their attacks coming down that avenue. All three of Atalanta’s forwards combined well, despite how many Juventus players were back to provide defensive assurance.

Down the left wing, Zapata and Gómez would drift towards these areas and drag the attention of the Juventus defence. Off the left, they would cut inside and look to find space inside the opponent’s box and take a shot from a favourable angle. In this game, they focused less on individual talent, and more upon how they could work more effectively as an attacking unit, and it worked in periods here. 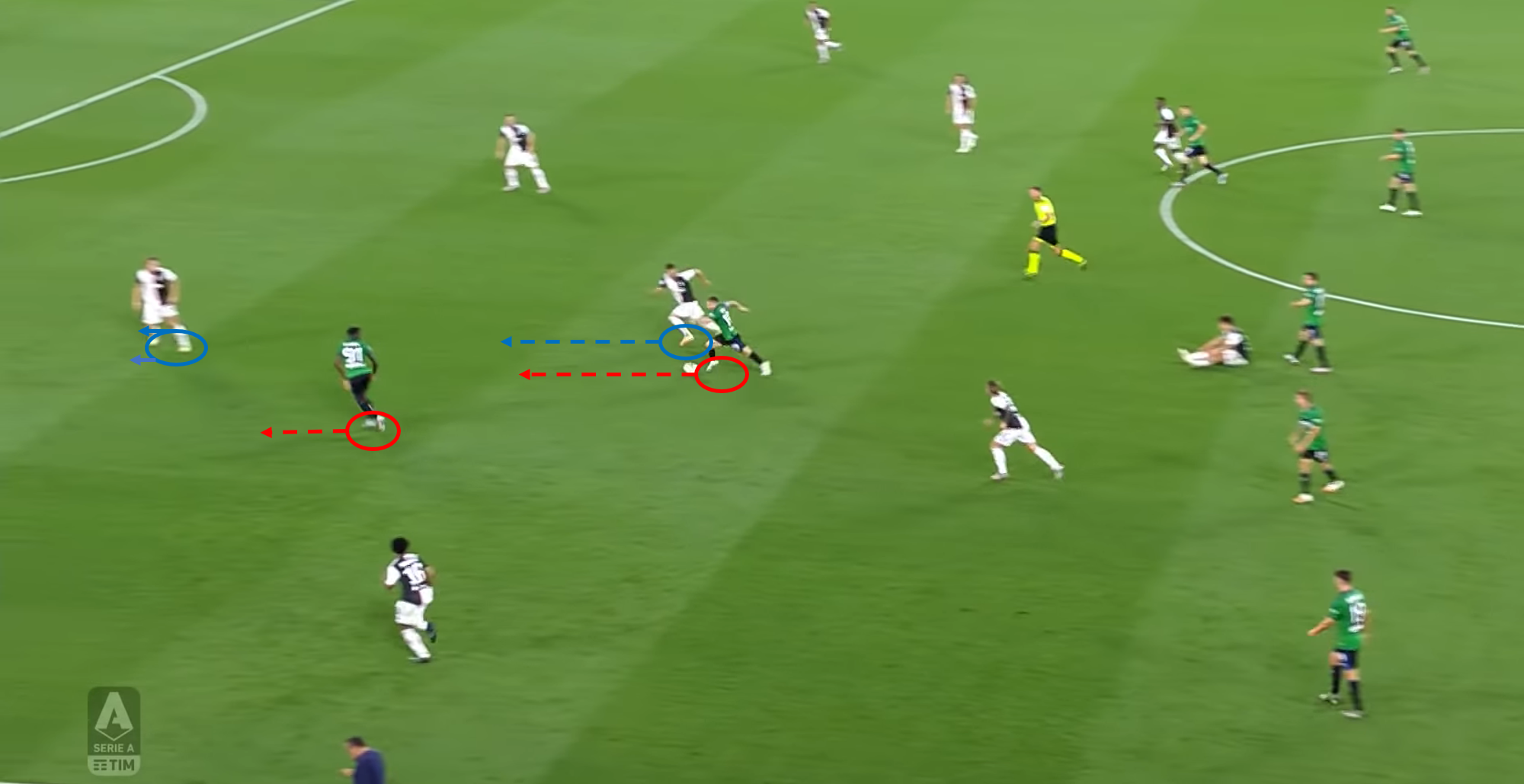 After a recovery by Atalanta, Gómez occupies the ball and begins to dribble with the ball. Zapata is in support, keen to receive the ball into his feet. 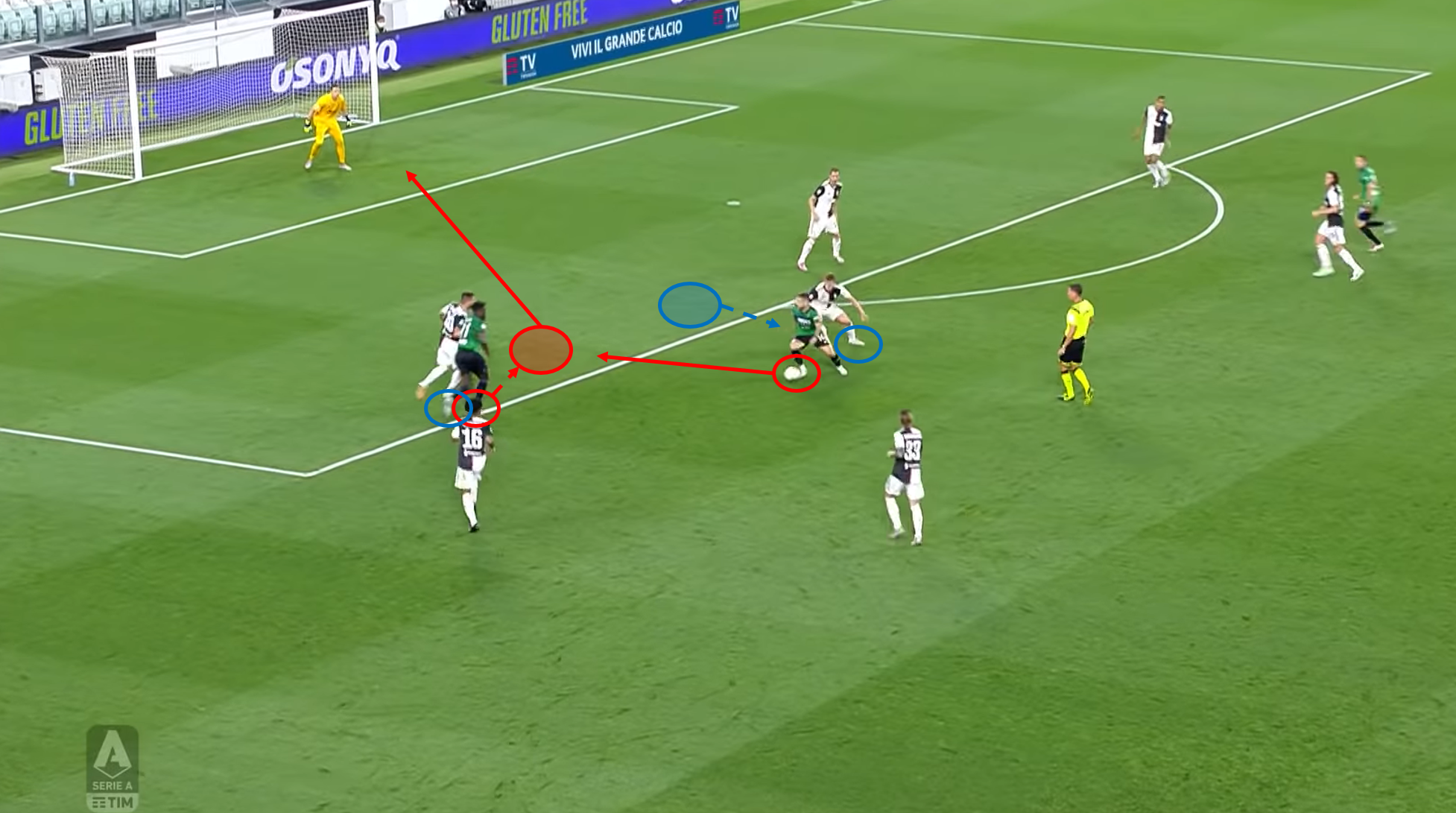 After a one-two is completed between the two forwards, Gómez holds up the ball and drags de Ligt off his defensive line. This creates space for Zapata to run into, to hold off Bentancur, and finish the ball into the bottom right corner.

As has been the case for much of the post-lockdown football that Atalanta have played, they were not at their fantastic best, but they did enough to get a decent result. Realistically, they deserved much more from the game, given the penalty decisions which went against them were unfortunate, to say the least. Nonetheless, football is often a game of luck and on this day, they did not get the rub of green required to establish the victory.

Ruslan Malinovskiy was introduced in the 68th minute of this tie and injected a sense of urgency and much-needed dynamism to Atalanta’s midfield, as he has demonstrated numerous times this season. His final-third threat has been a useful asset for Atalanta this season, whenever their forwards have lacked the direction necessary to drive a game in their favour (which admittedly is not often). He has looked bright throughout this season, as seen by his 0.3 xA, 3.34 successful dribbles (72.1% success rate), and 6.23 successful pressures per 90 to make for what seems to be a complete midfielder.

In this game, the focus was placed upon breaking the deadlock at the time and giving his side the advantage via taking shots of his own. Taking the game into his own hands, he completed three dribbles, took three shots, and had two touches in the penalty area, which was second in the Atalanta squad for this game. He looked to receive the ball directly into his feet and drive down the centre of the Juventus defence from there. 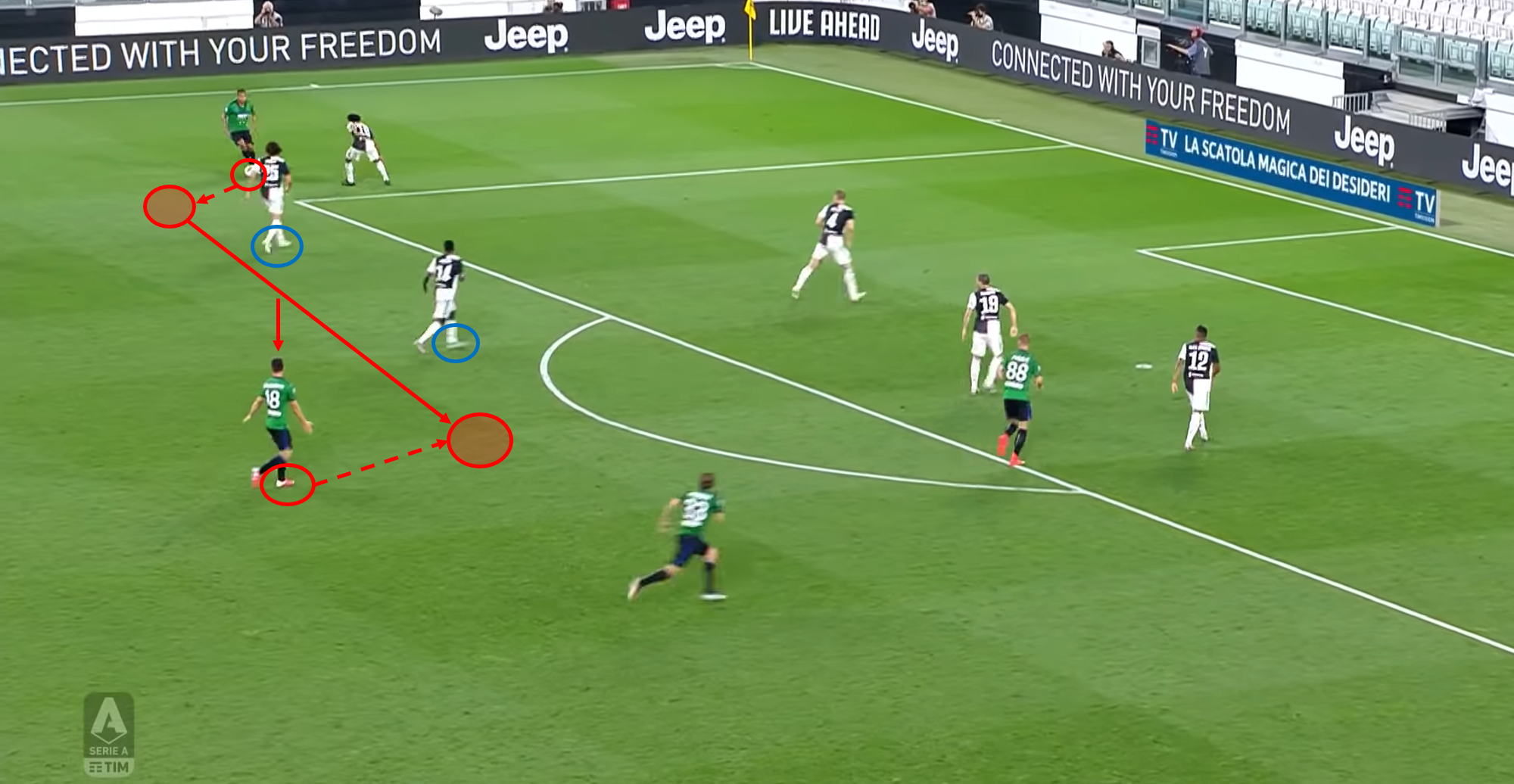 In the above analysis, we see Malinovskiy in a lot of space, asking for the ball to come to his feet. Luis Muriel takes it around Rabiot and plays the ball into the path of the Ukrainian. 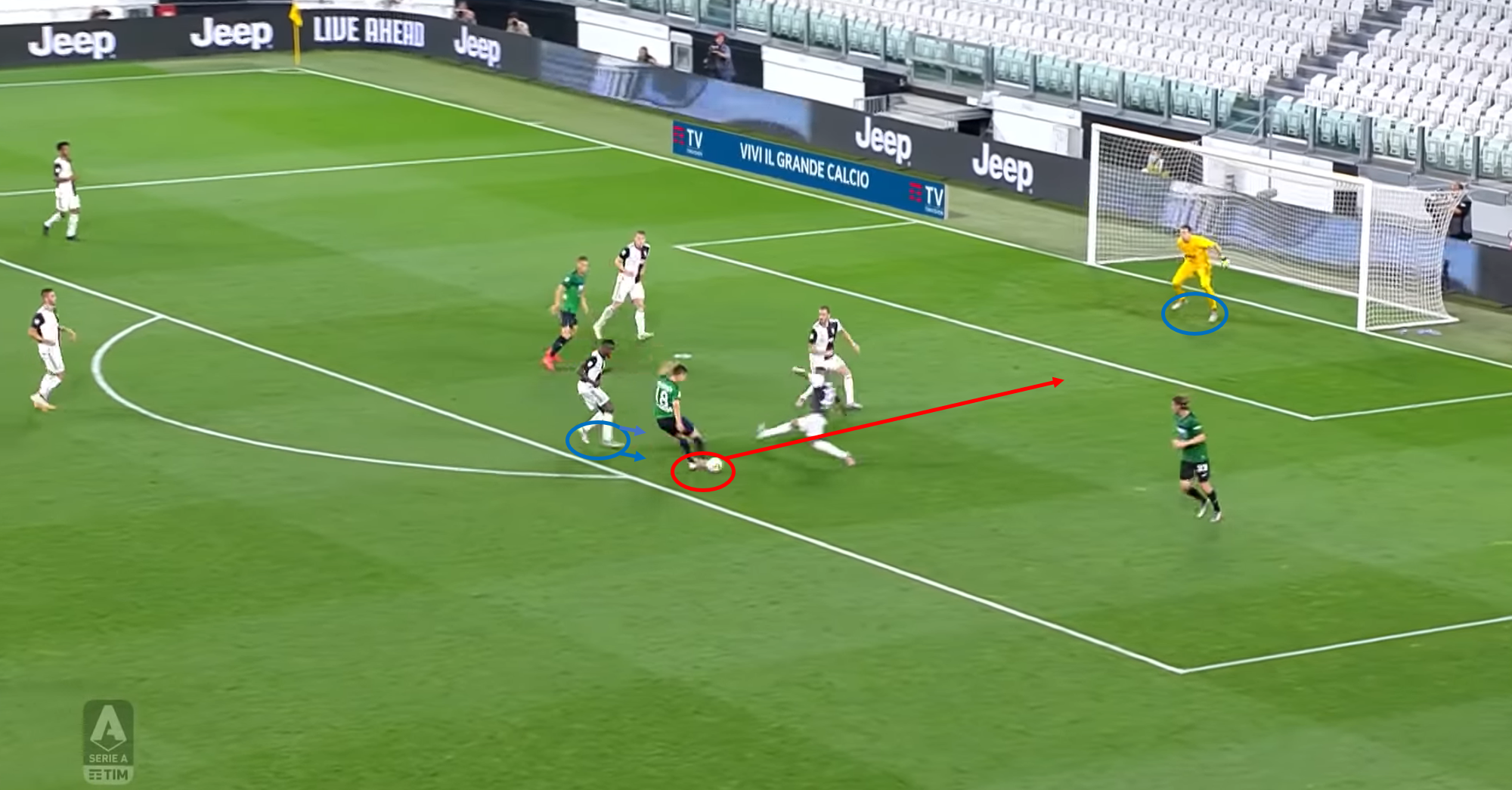 He drives into the Juventus box and hits the ball with such venom, that Szczęsny had little to no chance of saving it. The ball whizzed past the Pole’s left side and into the net.

Ultimately, Atalanta put in the better performance in this game, but they were considered unlucky to concede the two penalties they did. Largely due to the two penalties, xG had this game 2.00 to 1.44 in Juventus’ favour.

Sarri should be aware that Atalanta are an elite side in Serie A, and therefore his team’s performance can be dictated by that fact, but otherwise, this was a wholly poor performance. While his team play this 4-4-2 formation, they have struggled to keep possession in the centre of the park, seemingly outrun in most occasions. Sarri’s team selection was also puzzling, with Matuidi as left-midfielder going down as a risk which was not worth taking.

Gasperini can take solace from the fact that his side were comfortably better than the top of the table Juventus. His starting XI did a good job of combining and creating decent chances, while his choice of substitutes did a good job of bringing the game to Juventus. Though they did not create the chances at the volume they are used to, they were up against a side who are typically rigid defensively and less flexible than the standard Serie A defence.