It has been reported that Juventus are looking to add a midfielder to their ranks in the summer. The Old Lady are keen to bolster their squad in the summer as they prepare to part ways with players who are not a part of the plans going into the future. Multiple targets have been identified, and among those targets is PSG’s Argentinian midfielder Leandro Paredes. The 27-year-old, whose contract runs till next season, is also believed to be targeted by other Serie A clubs, including Inter Milan and Roma.

Paredes has already experienced playing in Serie A during his time with Roma. It has been reported that the Juventus hierarchy is willing to part ways with the Brazilian midfielder Arthur and the French midfielder Adrien Rabiot, both of whom have failed to impress in different roles in the midfield. Despite facing injury problems this season, Paredes has impressed in the role of a defensive midfielder in Mauricio Pochettino’s setup. However, it has been reported that PSG could shake things up in the squad, given their disappointing campaign in the Champions League, where they failed to progress past the Round-of-16.

The 27-year-old, who joined PSG in 2019, has been able to hold his own despite facing competition in a squad that boasts an impressive depth in multiple positions. So far, Paredes has made 14 appearances in Ligue 1 while also featuring in five matches in the Champions League.

Let’s take a look at some stats to gauge if Paredes would be a suitable addition to Bianconeri’s midfield. 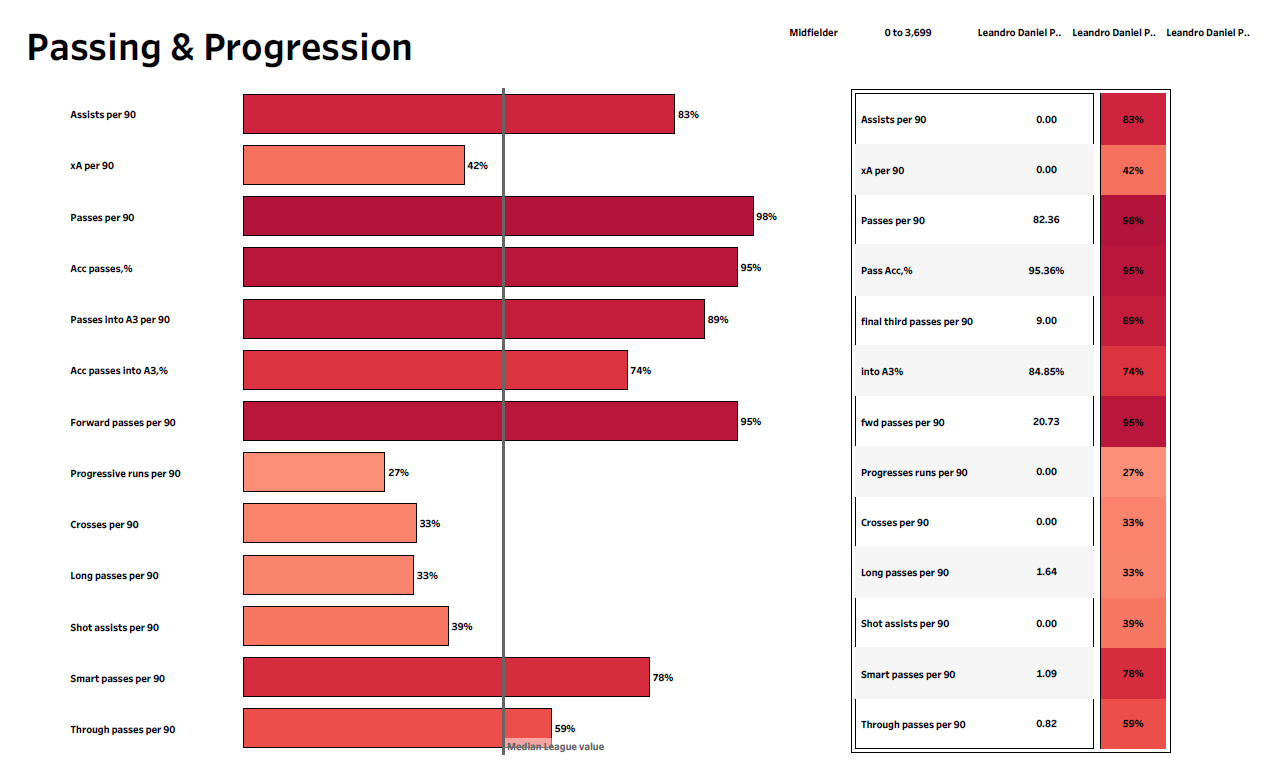 In the above viz, we can see Paredes’ passing & progression stats in the Champions League. Most of his stats are above the league average, with his most notable stats being passes per 90, passing accuracy, passing into attacking third per 90, and forward passes per 90. In addition, the midfielder has averaged more than one smart pass per match. The Argentine is known for his impressive passing ability and his understanding of the game. His reading of the game allows him to have an advantage in disrupting the opposition’s attack. 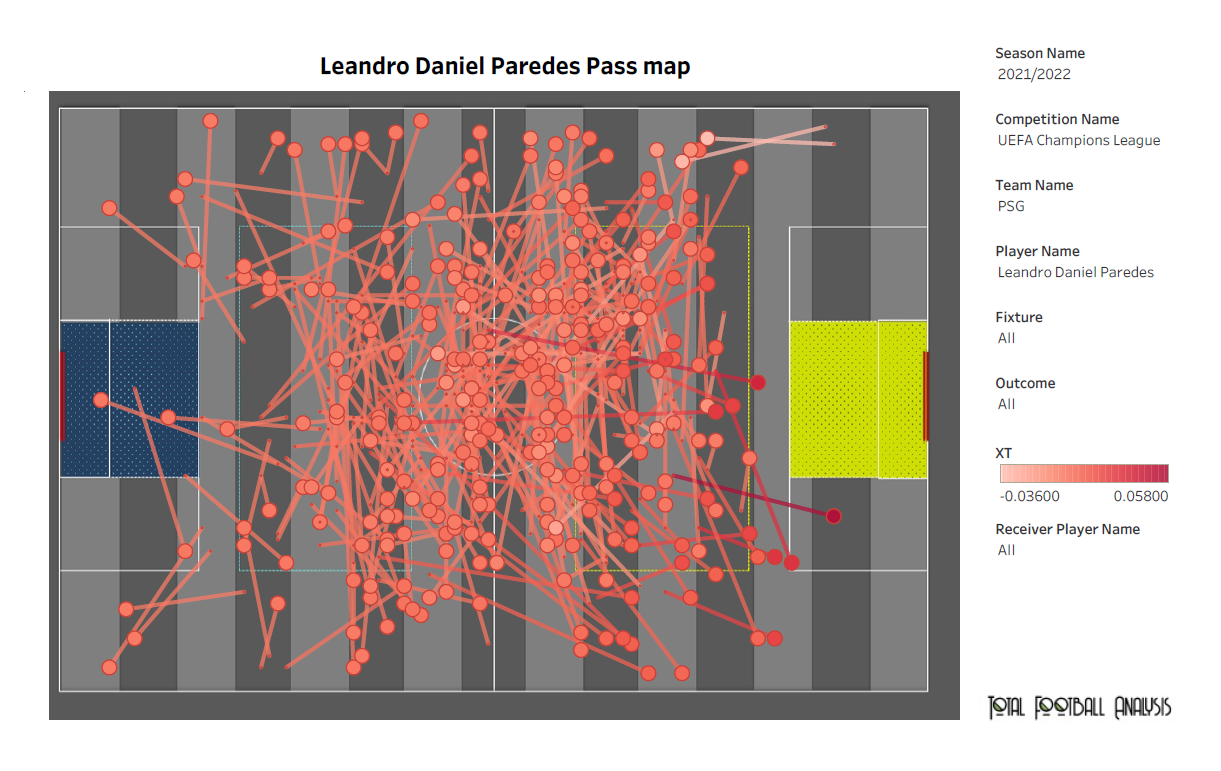 The above viz shows the locations on the pitch from where Paredes has delivered his passes. We can see the 27-year-old’s impressive passing range all over the pitch. Paredes’ role as a deep-lying midfielder allows him to be on the end of many passes. His body positioning makes it difficult for the opponent to read his pass direction. The Argentine combines his awareness and precise ball control to dictate the play from deep areas in the midfield. We can see in the above viz that some of his passes near the opposition box carry a high expected threat. 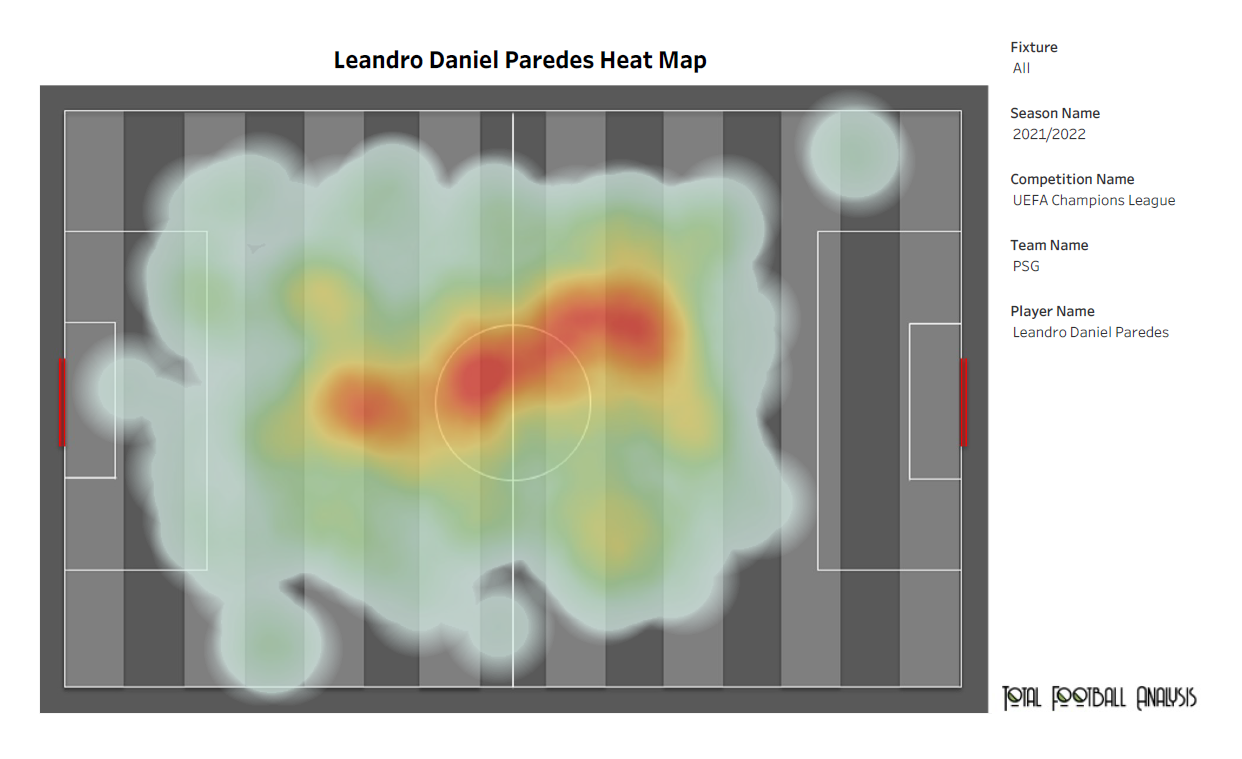 We can see Paredes’ area of activity in the heat map above. The 27-year-old can operate in both a double pivot or as the deepest lying player in a three-man midfield. Paredes is a regista who tends to dictate and organize play from deep in his half.  Although he does not possess much pace, his position aligns well with his physical and technical abilities. His passing, awareness, and vision on the field compensate for any shortcomings in speed. Under Pochettino, Paredes has been deployed as a defensive midfielder in a three-man midfield. In the above viz, we can see his presence in his half as well as the opponent’s half.

Paredes could solve Juventus’ problems in the midfield. The 27-year-old knows the Serie A, having played in the league during his spell with Roma. The Old Lady need an aggressive presence in the midfield, a player who could set the tempo and act as an important link-up between the defense and the attack, and the Argentine midfielder possesses these qualities.