Despite being the favorites to progress to the quarter-finals of the Champions League, the Old Lady suffered a disappointing defeat in the return leg of Round-of-16. Both the teams were at level-pegging at half-time, however, Villarreal scored three goals in the last 15 minutes to seal their passage to the next round. Gerard Moreno came off the bench to score a penalty in the 78th minute, awarded after a foul on Francis Coquelin. Pau Torres doubled the advantage from close range before Arnaud Danjuma secured the win with another penalty.

While the Bianconeri looked impressive before the break, a change in tactics in the second half from Unai Emery saw Villarreal become defensively more solid, and they were able to effectively absorb Juve’s attack. The technically sound Villarreal controlled the possession for long periods and were able to progress into the attacking half with ease, while the Bianconeri absorbed the pressure in the opponent’s half.

Although they did control possession, more specifically with their dynamic display in the wide areas, Villarreal produced limited threat and created few clear-cut chances in the first half. However, Unai Emery’s men held off Juve’s attack and waited for their opportunities to arrive. Often Juventus have struggled against teams with a low block, and it was evident again on the night, as they were unable to penetrate a compact Villarreal side.

Let’s take a look at some stats to gauge how Allegri’s men were outclassed against Villarreal. 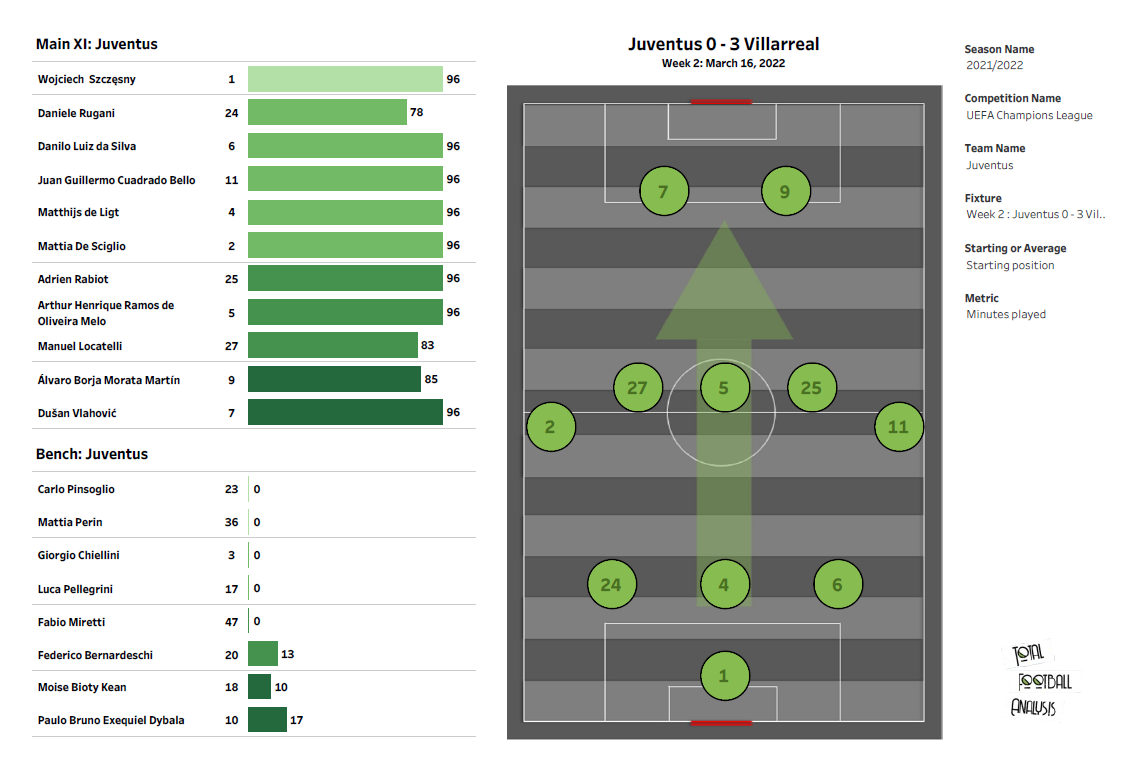 In the above viz, we can see that Juventus lined up in a 3-5-2 formation. Dusan Vlahovic and Alvaro Morata paired up in front of the attack, while the three-man midfield included Manuel Locatelli, Arthur, and Adrien Rabiot. Juan Cuadrado and Mattia De Sciglio occupied the wing-back spots. Danilo, Matthijs de Ligt, and Danielle Rugani were the three centre-backs. Without Federico Chiesa and Paulo Dybala, the Old Lady struggled to create tight spaces. Dybala can create in tight spaces utilizing his nimble footwork, while Chiesa can get in behind tight defenses. It was evident that the Old Lady missed some of their best creators. 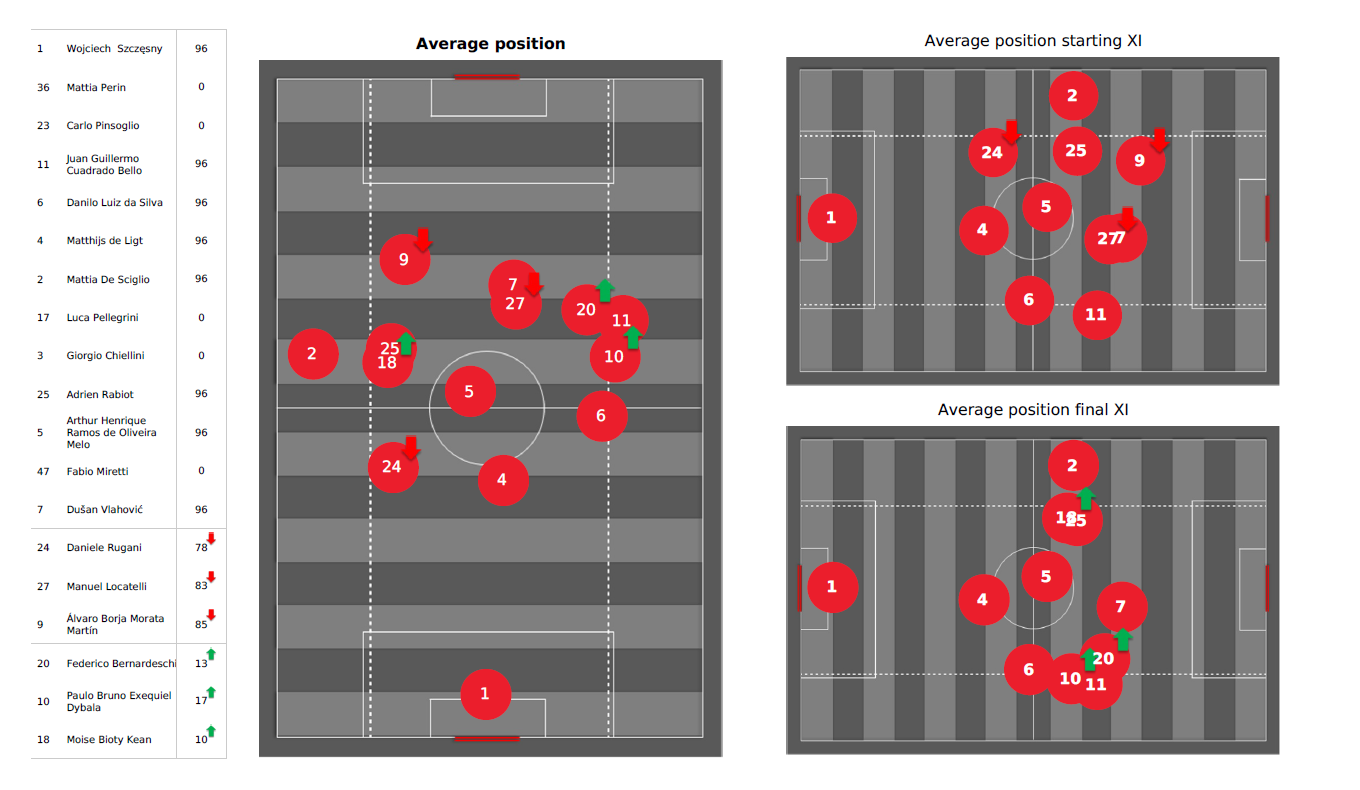 The above viz. displays the average positions occupied by Juventus. We can see that many players occupied multiple spaces in the opponent’s half. Juventus played with a high line, trying to break down a resilient Villarreal side. However, a compact Villarreal side stood their ground and sustained the pressure. Both Cuadrado and De Sciglio offered width by advancing into the opponent’s half. Vlahovic and Morata were highest up the pitch in a bid to occupy spaces between the opponent’s defensive lines. Juventus were unable to take their chances early on in the match as Cuadrado was threatening with his crosses. 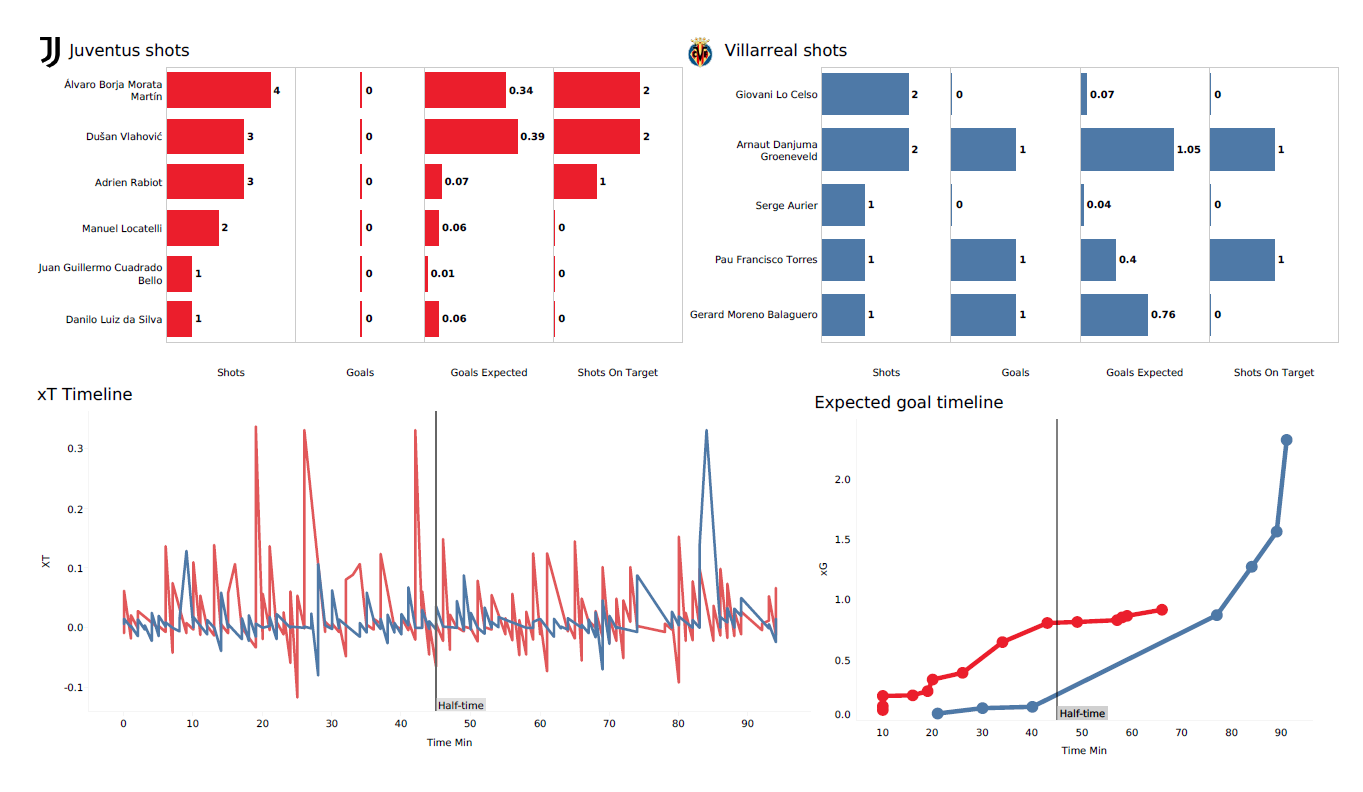 We can see that Juventus were threatening in both the halves as indicated by the xT timeline. Vlahovic missed two great opportunities in the first half, one from close range and another one hitting the crossbar. In addition, Morata failed to find the back of the net from Cuadrado’s impressive crosses. In the midfield as well, the Bianconeri held on to the possession but were unable to play through Villarreal’s low block, more specifically in the second half. The Spanish side absorbed the pressure effectively as there was no real penetration or threat offered from the midfield.

Juventus failed to capitalize from the opportunities that they created in the first half while they struggled to break down a robust Villarreal defense in the second. Villarreal held on and were rewarded, scoring three late goals and sealing the win 4-1 on aggregate. The Yellow Submarine will now take on Bayern Munich in the quarter-finals.