Juventus will welcome Villarreal for the return leg of the Champions League Round-of-16. Since the turn of the year, the Bianconeri have seen a decent run of form. They have moved back into the top-four of Serie A, while they are also in an advantageous position to move to the quarter-finals of the Champions League. The Old Lady are undefeated in their last five matches in the league and currently sit at the fourth spot with 56 points in 29 matches. Allegri has done a decent job in finding tactical solutions that have allowed Juve to lay a claim to a top-four finish, a scenario that was looking unlikely last year.

The arrival of Dusan Vlahovic in the summer has been tremendous for the Old Lady. The former Fiorentina forward has scored four goals in nine appearances and has been instrumental in Allegri’s attack in the recent matches. The striker was on target in the first leg of Round-of-16 as well, scoring the second-fastest goal ever for a Champions League debutant.

Vlahovic’s addition to Allegri’s squad has also benefitted Alvaro Morata, who recently became the Old Lady’s leading scorer in the Serie A after scoring a brace against Sampdoria during the weekend. The Spaniard has been afforded more freedom on the left, now that he no longer has to function as the focal point of Bianconeri’s attack.

Despite showing signs at the end of last year that he might move to a more attacking 4-3-3/4-2-3-1 formation, Allegri has since moved back to his preferred 4-4-2. However, in the first leg against Villarreal, Allegri went for a more defensive approach with a 3-5-2/5-4-1 formation. The Old Lady were satisfied to sit back for the majority of the game, absorbing pressure from the home side, looking for opportunities to counter.

Let’s take a look at some stats to gauge how Juve could line up to unlock the Villarreal defense. 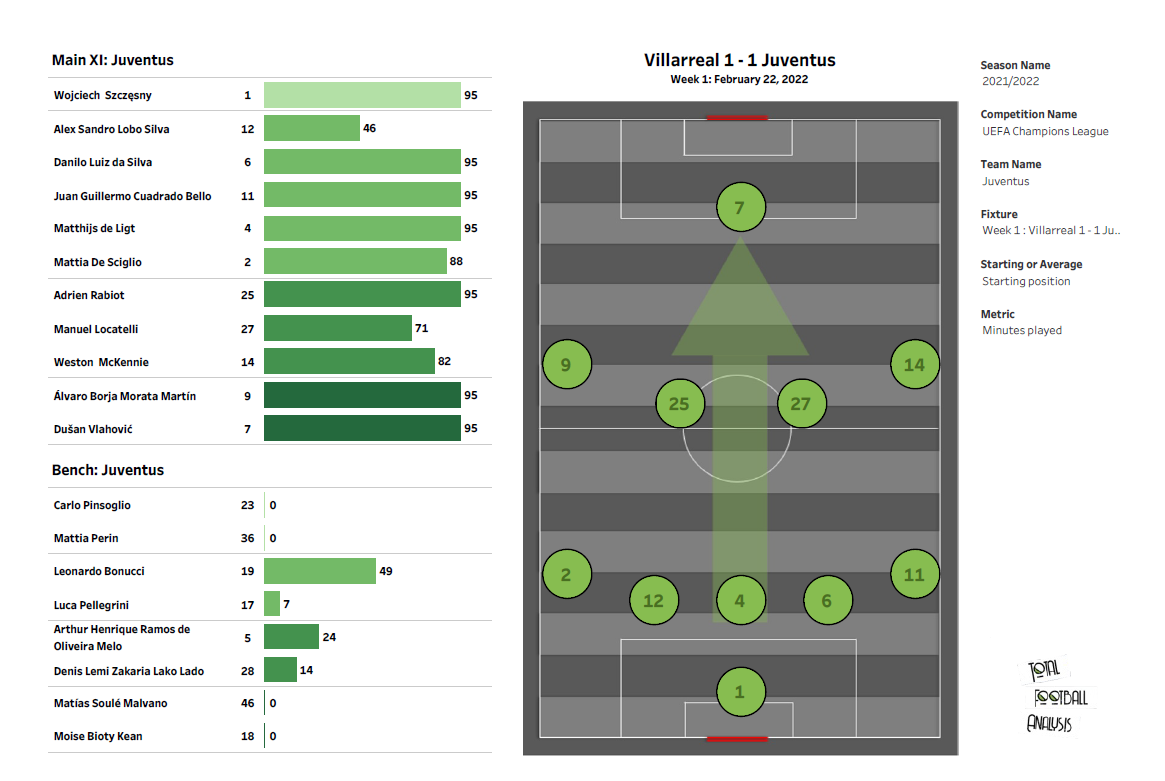 The above viz displays Juve’s lineup in the first leg of the Round-of-16. The three central defenders included de Ligt, Alex Sandro, and Danilo. They were flanked by De Sciglio and Cuadrado, who operated as wing-backs. Rabiot and Locatelli occupied the central midfield positions, while Morata and McKennie occupied the wide-midfield positions. Dusan Vlahovic led the attack for the Bianconeri upfront. Allegri could go for a more attacking approach by deploying a 4-4-2, as he has done in three out of four matches since the first leg. 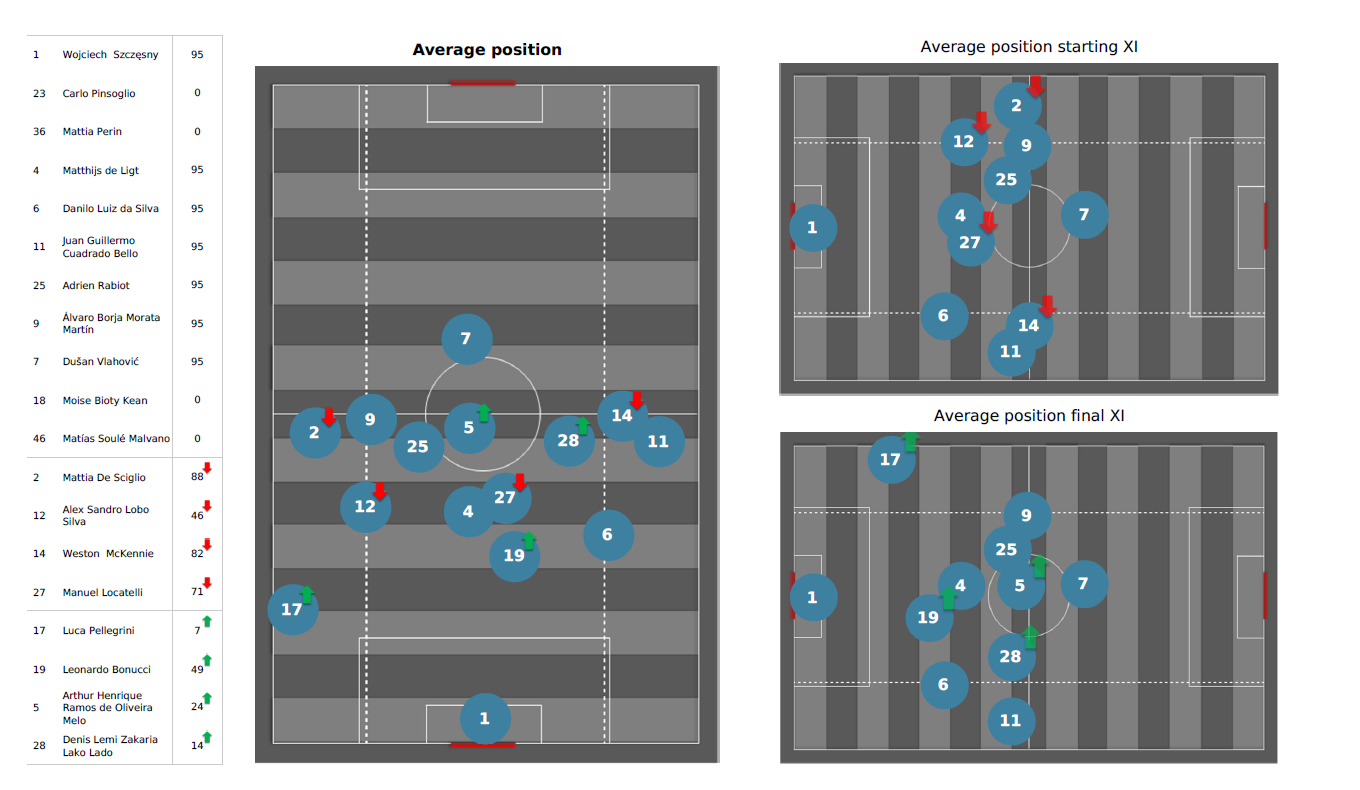 In the above viz, we can see the average positions occupied by Juventus in the first leg against Villarreal. We can see that they were pushed in their half for the majority of the game, forming a low/mid-block. Vlahovic was the man highest up the pitch for Juventus. Both the wing-backs stayed in their half near the centre as well. The Bianconeri crowded up the midfield to absorb the pressure from Villarreal attackers.  The recent form of Morata on the inside forward position on the left could make Allegri go for a more attacking formation. The Spaniard has been seen making darting runs behind the defense while also dropping near the midfield to create an overload. The Striker has scored three goals in his two recent appearances. 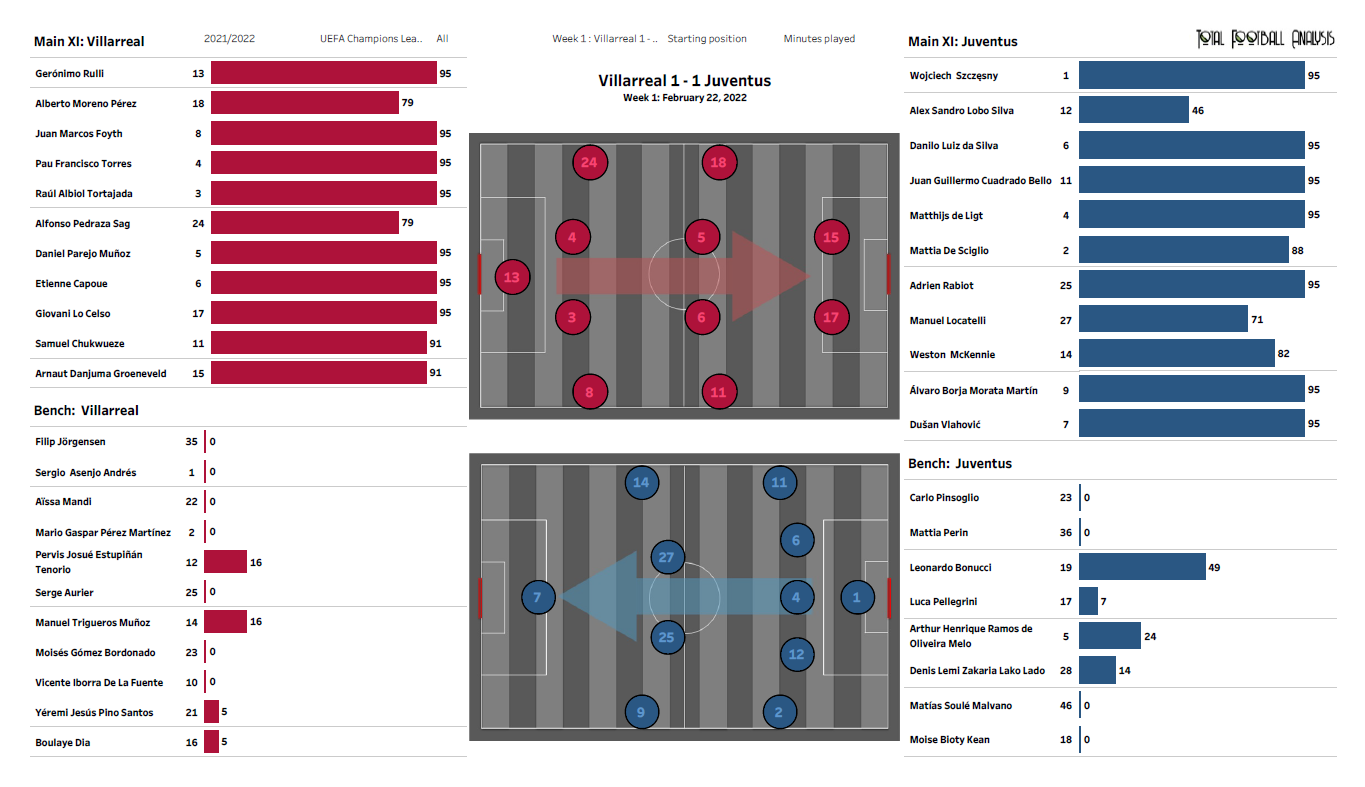 The above viz presents a comparison of lineups in the first leg. We can see that Villarreal went for a more attacking approach with a 4-4-2 formation and could go for a similar formation in the second leg. In some recent games, Allegri has deployed his preferred 4-4-2, which relies more on individual creativity in the attack. Both Vlahovic and Morata could produce the goods for the Bianconeri.

Based on the previous lineups and formations, Allegri could go for a more attacking approach with a 4-4-2 or even a 4-2-3-1 if he wants more verticality. Depending upon the formation, Arthur and Luca Pellegrini could also be brought back into the fold. Barring a few changes, Allegri could stick with the same lineup as the first leg.