For almost half a decade now, the Old Lady’s midfield has been a cause of concern. Last season further highlighted that Juventus would need to find a midfield combination if they are to keep up with the Serie A title race after dominating in the previous decade. Following the re-appointment of Allegri, problems with Juve’s midfield have remained largely the same.

During his first spell as the Old Lady’s manager, Allegri’s midfield consisted of Pjanic, Matuidi, and Khedira, who provided a solid foundation in the midfield. Bentancur, who was a prominent part of the midfield during Sarri’s time in charge of the Bianconeri, slowly saw his form decline, and he has eventually been transferred to Tottenham. Adrien Rabiot has struggled to make an impact since his move from PSG. Although, despite struggling in the midfield, Rabiot has been able to find a role in Allegri’s starting XI, owing to his technical qualities. Arthur Melo is in a bracket of players who have found it difficult to find a place in Juve’s midfield, be it through injuries or individual form.

Juventus made great strides in the transfer market, bringing in Manuel Locatelli from Sassuolo in the summer and Dennis Zakaria from Borussia Monchengladbach in the January transfer window. During the current season, we have seen Allegri utilize 4-4-2 during the first half of the season. Although, from December last season, we saw Allegri use 4-3-3/4-2-3-1 more frequently, a scenario that has continued in the recent games as well.

Let’s take a look at some stats to gauge what is Bianconeri’s best midfield combination if Allegri does decide to stick with a 4-3-3 system. 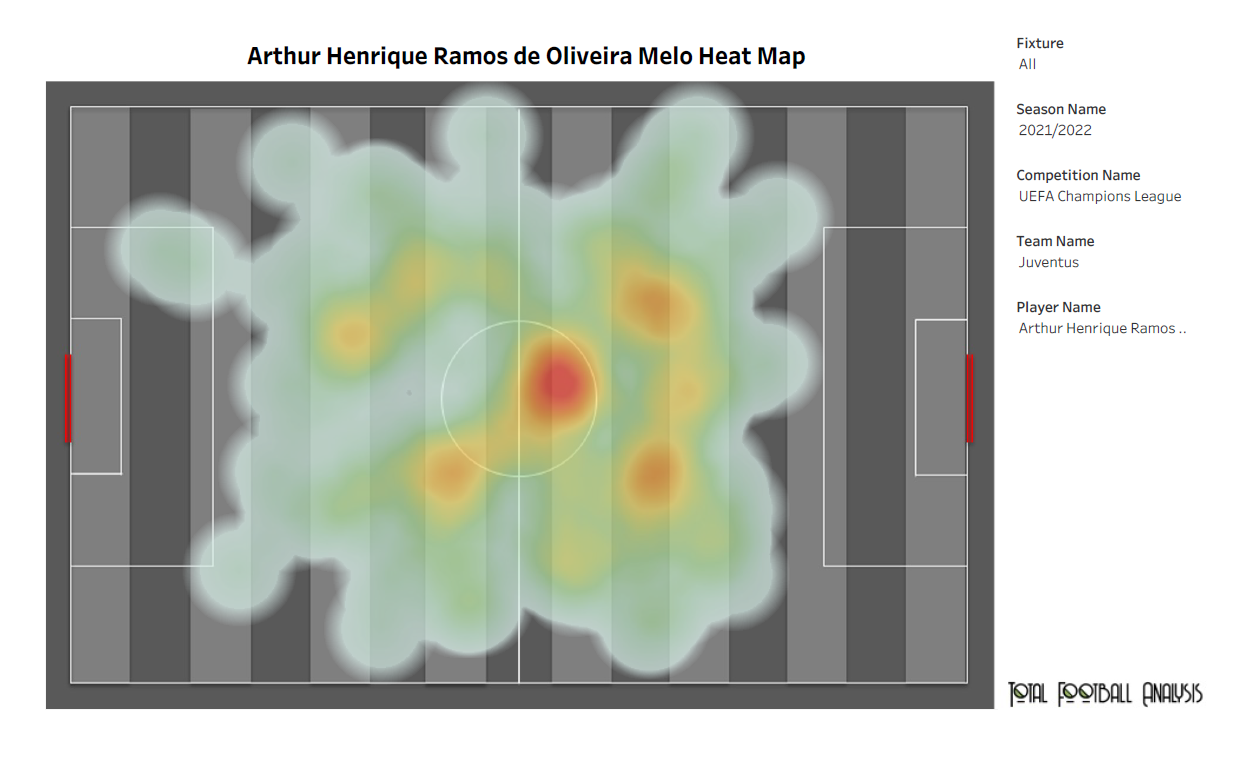 There is no other player in the Old Lady’s lineup who is more fit for the holding midfield role than Arthur. The Brazilian’s ability to retain possession under pressure makes him an ideal candidate for the position. The above viz. highlights the areas where he is most active. We can see that he has occupied spaces near the centre in the opponent’s half, drifting into half-spaces. Since the start of the year, Arthur has enjoyed success in his newfound deep-lying role in Allegri’s midfield. The Brazilian’s area of operation is near the centre or the half-spaces on the left. He can receive the ball in half-turns and can combine well with his forward players. We can see that Arthur has covered vast spaces in his half as well. 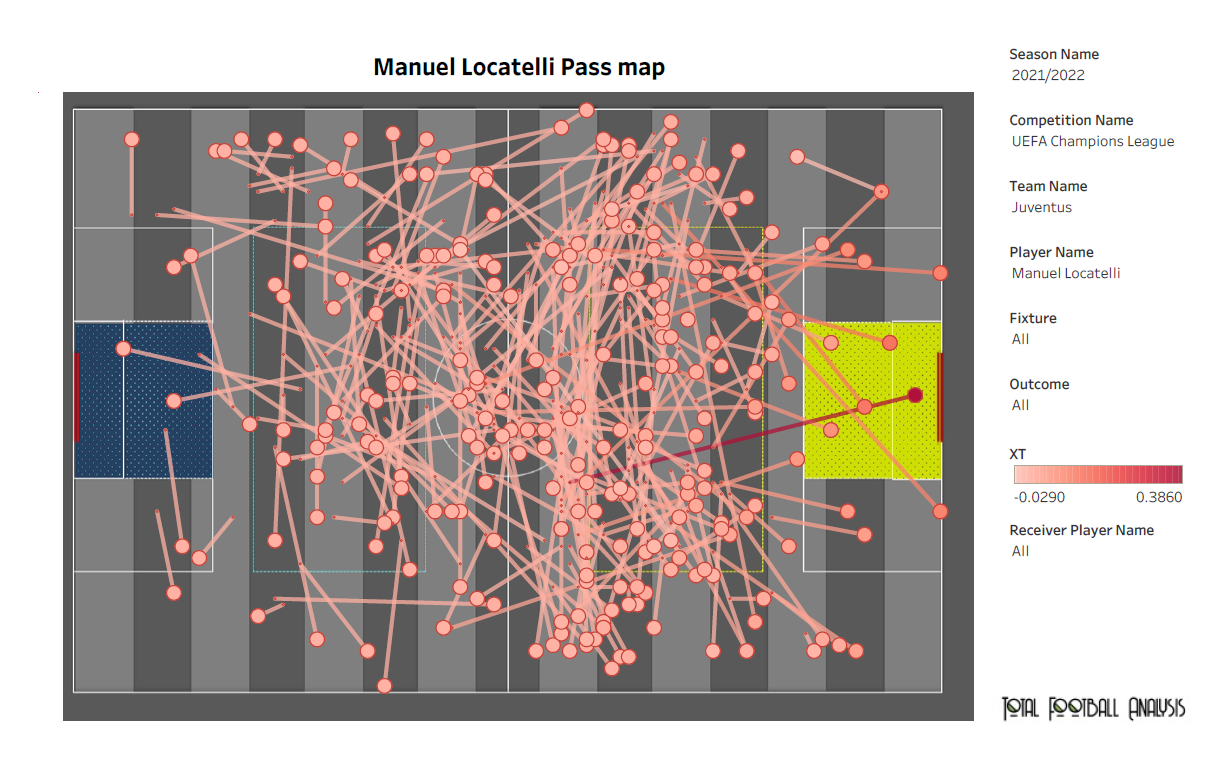 In the recent matches, Locatelli has been deployed in a box-to-box role. His introduction in that role has been game-changing. During the Euros as well, Locatelli was one of the standout stars of his national team. In the above viz., we can see the passes delivered by Locatelli. One of his greatest assets is his distribution. The midfielder is capable of delivering a wide array of passes, from line-breaking progressive passes to neat short passes when recycling the ball. One of the key concerns of Juve’s midfield has been the lack of creativity from the midfield areas, and deploying Locatelli in that role could solve that problem. 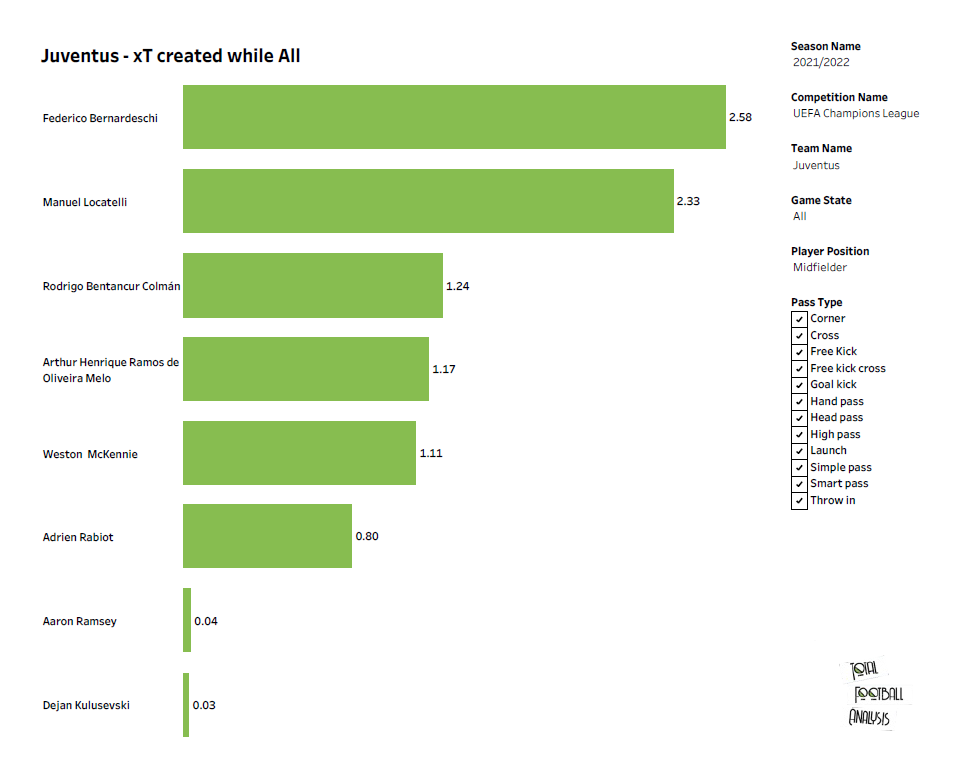 Both Rabiot and McKennie can operate in this role, however, Rabiot has been inconsistent throughout the season, which means McKennie can very well be deployed in that role. McKennie’s work rate and all-round contribution would make him suitable for that role. He can operate in the half-spaces on the right flank. McKennie would join Paulo Dybala between the lines and make his relentless runs in behind defenses. In the above viz., we can see that McKennie is number fifth in terms of xT created.

The new signings, along with a re-shuffled midfield, could turn the fortunes for the Bianconeri. Juventus have an important Round of 16 fixture coming up, and Allegri would need to find the best combination for his midfield.