Since the announcement of Giorgio Chiellini leaving Juventus, the Turin-based club have been on a hunt to find his replacements. This may not be an easy task as the Bianconeri are attempting to replace a club legend who has made 422 appearances for the team. Still, there is no other option but to buy one from the transfer market especially, with Leonardo Bonucci being 35 years old. On the plus side, there are a lot of quality young centre-backs on the market. But on the down side, none of them will come cheap. One man who could be a great addition to the Juventus backline is Arsenal’s Gabriel Magalhaes. 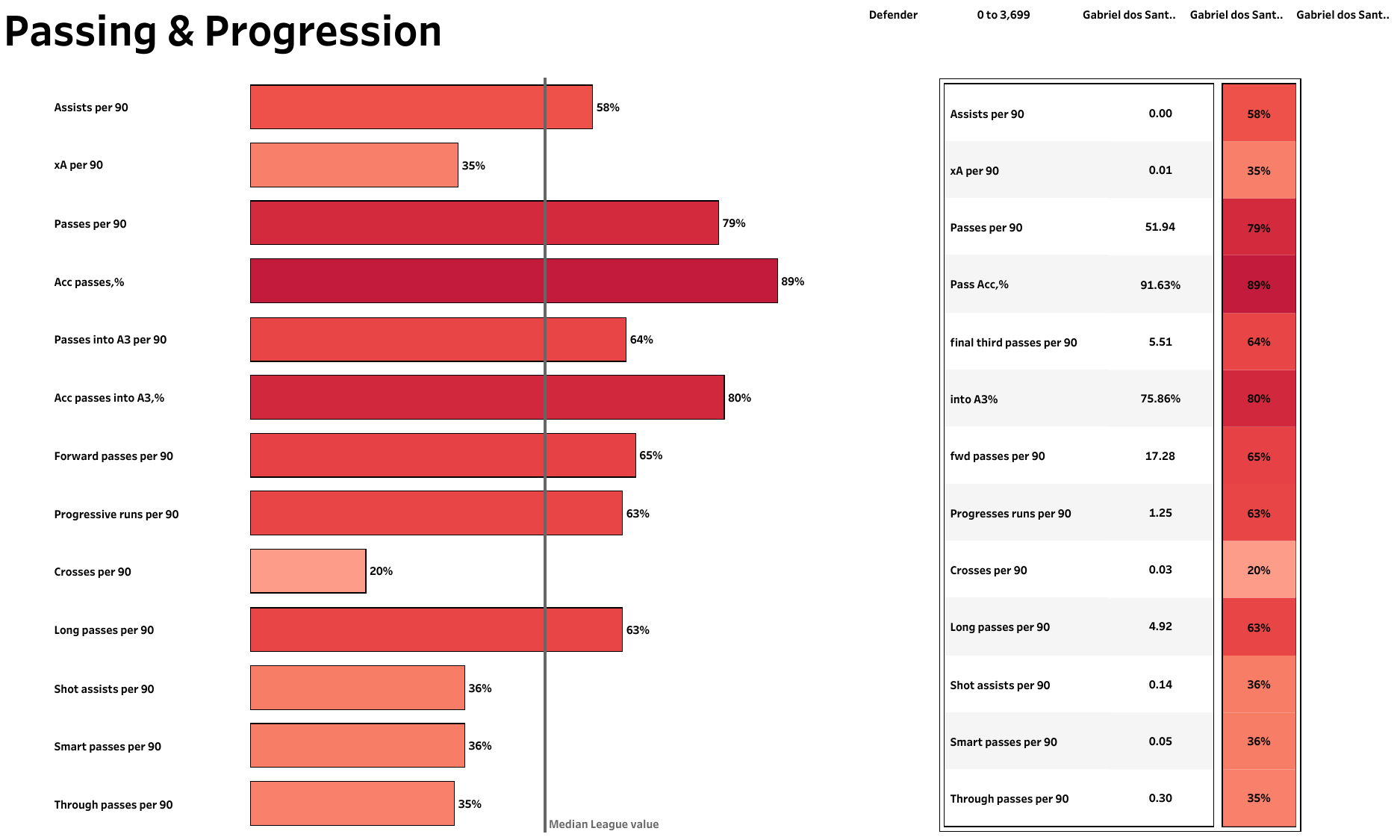 Magalhaes featured for Arsenal in 35 Premier League matches in the recently concluded season. The Brazilian scored five goals for the Gunners during his 3,063 minutes of time on the pitch. Gabriel was an active member in the build up of Arsenal’s attacks, averaging just under 52 passes per 90 at a very high accuracy of 91.63%. The Brazilian was also helping the Gunners progress the ball with his 5.51 pass attempts into the attacking third per 90 at an accuracy of just over three fourths. The 24-year-old made 1.25 progressive runs per 90, well above the median for defenders. 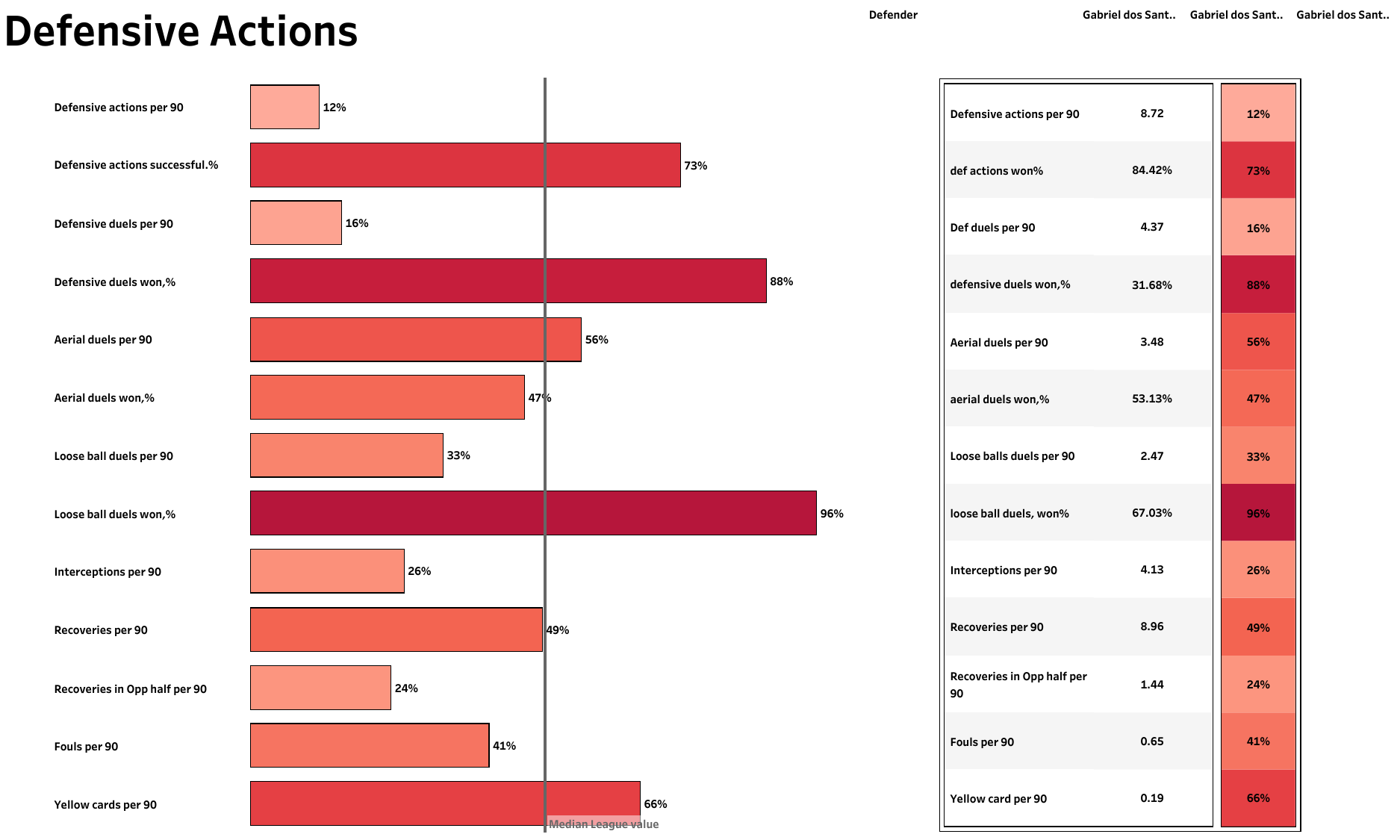 Magalhaes attempted only 8.72 defensive actions per 90, which was in the lowest quintile for defenders. But his success rate of 84.42% puts him in the upper third among defenders. It is a similar story in defensive duels as Gabriel attempted only 4.37 per 90 but won 31.68% of them, the success rate ranking him in the upper quintile. The 24-year-old won only 53.13% of the aerial duels he conteste, which was below average, especially given his height of 190 cm. The Sao Paulo-born centre-back recovered over two-thirds of the loose ball duels he competed. 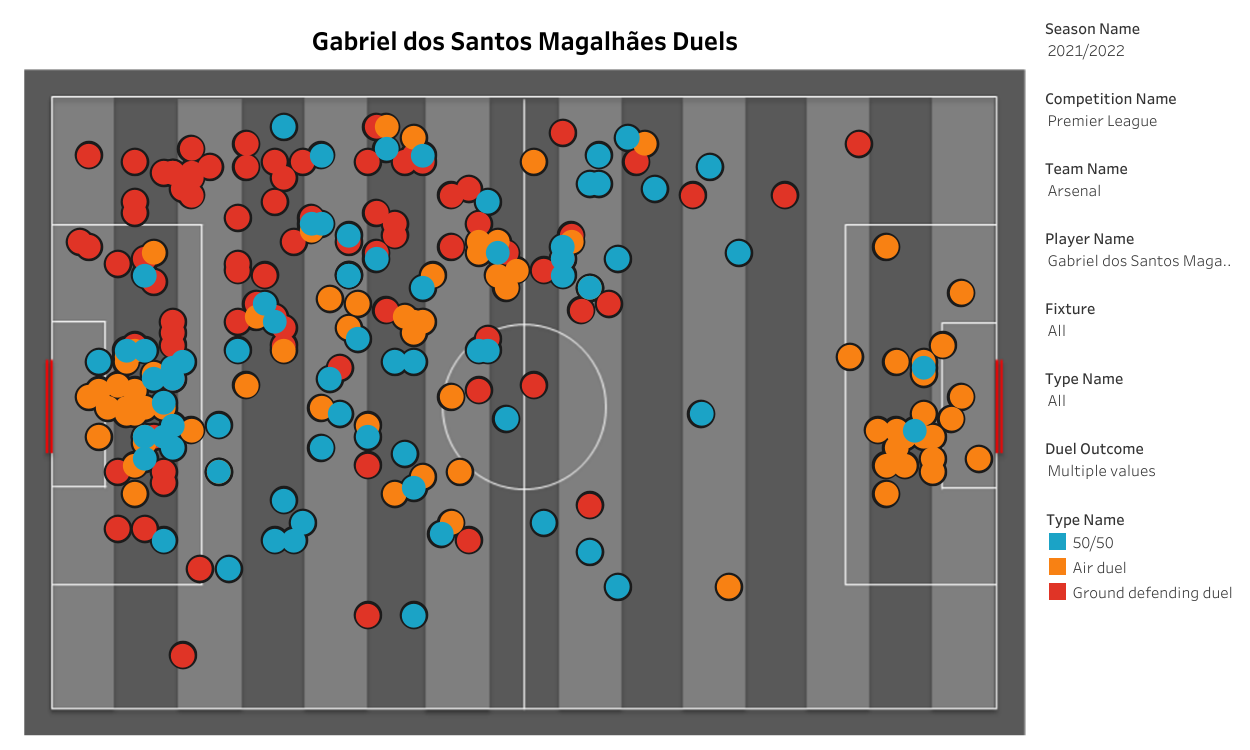 Given above are the locations of duels won by Magalhaes in the 2021-22 Premier League season. Unsurprisingly, most of these came in his half between the penalty box and midfield. The Brazilian also won headers from set-pieces in the opposition’s penalty area. The 24-year-old won a variety of duels, including 50/50s, aerial battles and ground battles.

Gabriel Magalhaes has made progress from the 2020-21 season as he played 12 more games in the league the following season. The return of William Saliba after a sensational loan spell at Marseille may mean the Brazilian’s game-time would take a hit, but the majority of Arsenal fans will want to see Saliba and Magalhaes as the first-choice centre-back pairing. It would be extremely difficult for Juventus to sign the Brazilian centre-back.