After a two-month absence due to a thigh injury sustained back in November, Danilo finally made his return last month in Juventus’ Coppa Italia win over Sampdoria. During his absence, the Old Lady have managed to stabilize themselves, losing just one match in Serie A and three across all competitions since the end of November. Danilo’s timing of return will be huge for Allegri, as the Bianconeri look to improve their position in the league while they also have an important Champions League Round of 16 match coming up in February.

Danilo made his first appearance in the league after returning from injury in the 2-0 win against Verona. The Brazilian’s unavailability limited the number of options for Allegri in the right-back as both Cuadrado and De Sciglio were rotated in that position. While he did look a bit rusty on a few occasions, Danilo put up an overall impressive performance and was defensively solid. The 30-year-old Brazilian displayed that he can become the stabilizing force at the back for the Bianconeri with his robust defensive attributes combined with his interceptions and ability to defend the opposition crosses.

During last season under Pirlo, Danilo was a mainstay in the Old Lady’s backline, making 34 appearances in the Serie A and seven in the Champions League. In the current season, the Brazilian has featured in 12 Serie A matches, although his involvement was limited due to his spell on the sidelines. He was also part of the starting lineup in three Champions League group stage matches.

Let’s take a look at his stats from the Champions League to gauge whether he could provide stability to Allegri’s backline. 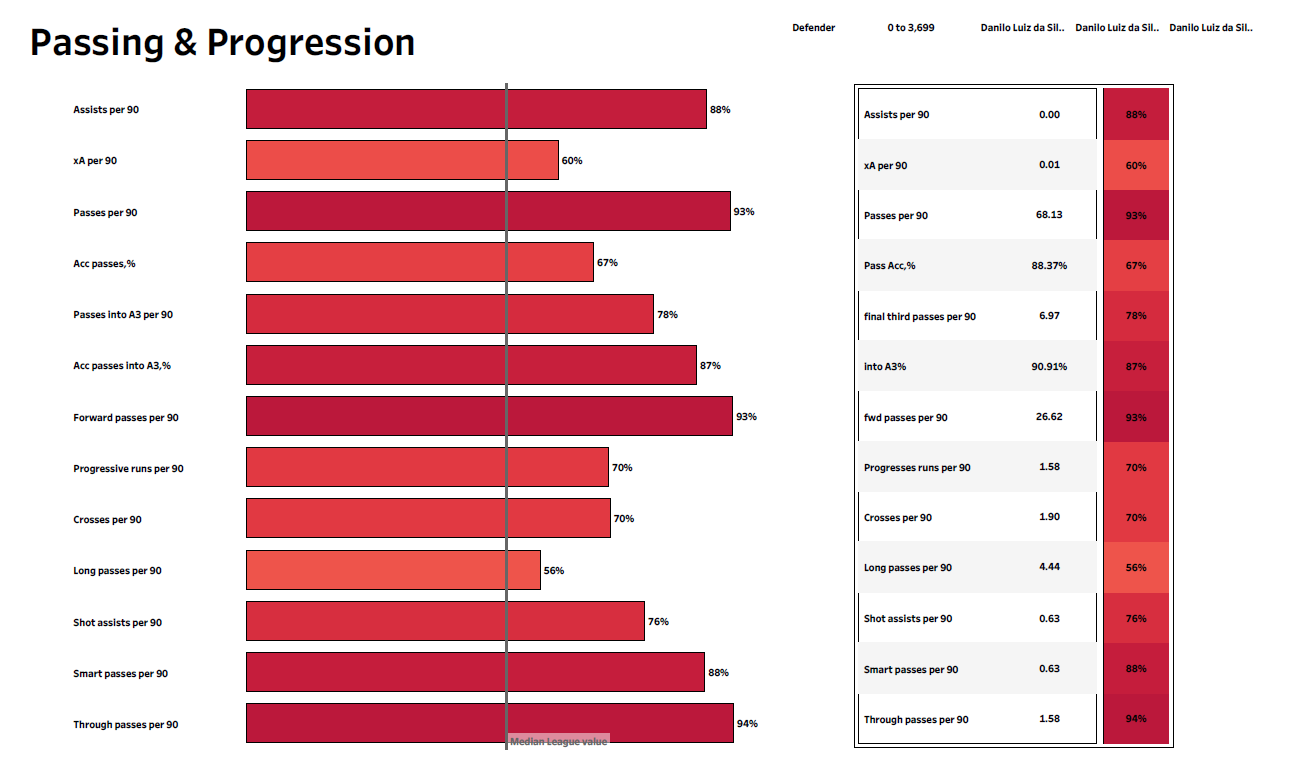 In the above viz., we can see Danilo’s passing & progression stats. The majority of his stats surpass the league median value, with the most notable stats being passes per 90, accurate passes into the attacking third, forward passes per 90, and through passes per 90. Danilo possesses impressive ability on the ball, excelling at passing and ball control. He is adept at dictating the tempo and is crucial for his side’s build-up from the back. Danilo presents a more balanced option for Allegri in the right-back as Cuadrado is more suited for a forward role, and De Sciglio might be more suited to play at left-back. 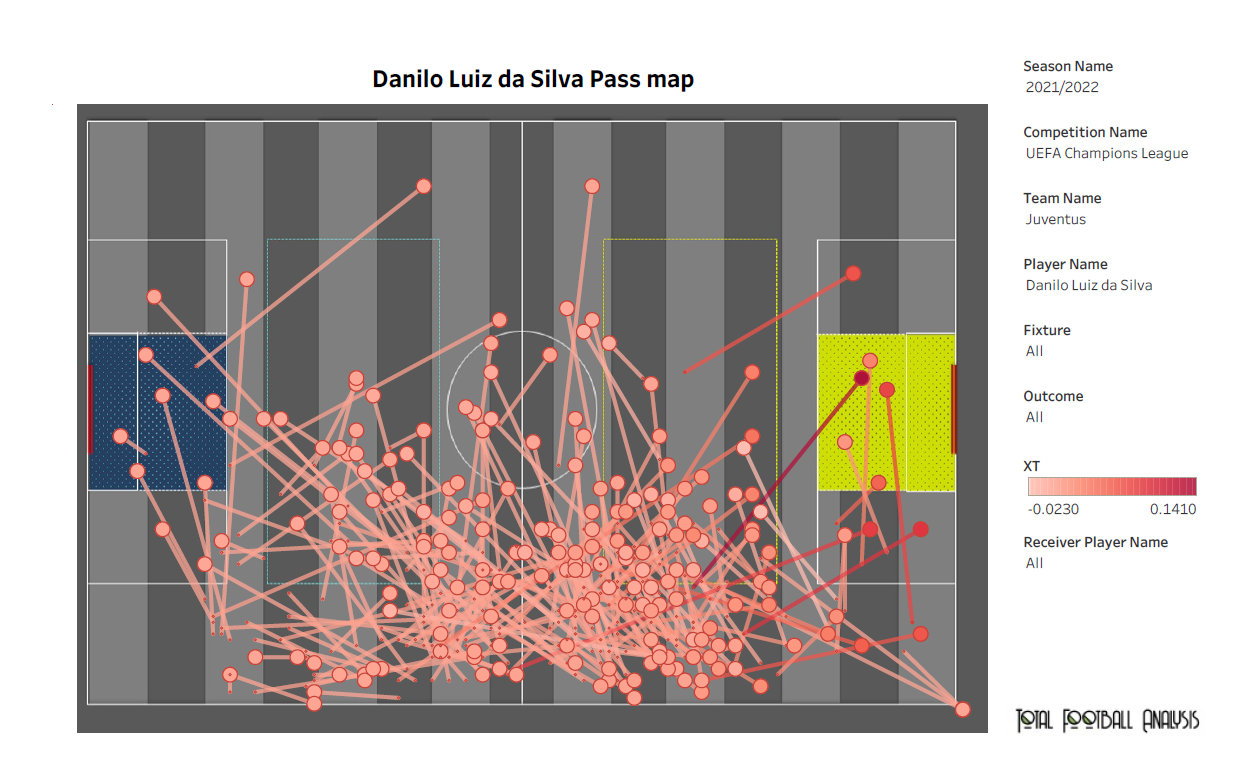 The above pass map highlights the areas of the pitch where Danilo has delivered his passes. We can see that he has delivered his passes into the opposition box from the wide areas, as well as the half-spaces on the right flank. Danilo is an adept distributor of the ball, as indicated by the above viz. He stays near the midfield and acts as decent support for the defensive midfielder, providing them with another passing option. When defending the counterattacks, Danilo’s balanced position on the pitch allows his side to close down the spaces. 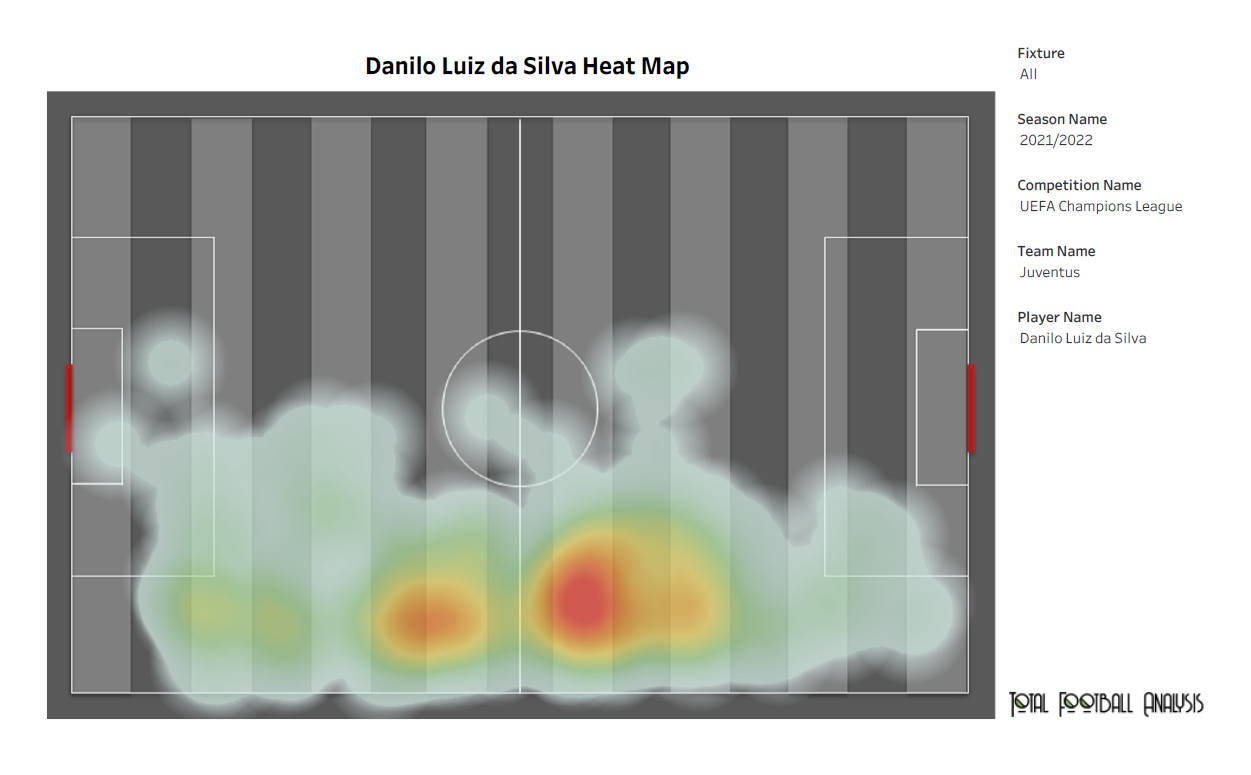 In the above viz, we can see the locations on the pitch where the Brazilian is most engaged. Under Allegri, Danilo’s responsibilities are focused more on the defensive side of his game, although he is allowed to move into the open spaces during the overlap. We can see in the above viz. that Danilo has covered both the attacking and defensive halves on the right flank. Danilo blends his concentration and awareness well, which makes him an impressive defensive performer.

Danilo’s return could prove to be vital for Allegri as the Old Lady will step into a crucial part of their season. The Brazilian’s combination of attacking and defensive attributes will be an asset for his side as they look to build up upon their recently revived form.