Juventus will welcome Villarreal at the Allianz Stadium on Wednesday for the return leg of the Champions League Round-of-16. The home side are undefeated in all competitions since the first leg while the visitors have suffered one defeat in their previous three matches. Can the Old Lady move to the quarter-finals?

Juventus have seen an impressive form since the turn of the year. They are undefeated in 12 back-to-back matches in all competitions. The Bianconeri are currently placed fourth in Serie A with 16 wins, eight draws, and five losses in 29 matches. In the first leg, Dani Parejo scored in the 66th minute to level the score after Dusan Vlahovic provided Juve with an early lead. The Old Lady head into the return leg after a 3-1 win over Sampdoria last Saturday. Alvaro Morata’s brace and Maya Yoshida’s own goal ensured that Juve took three points. They would be hoping for better performance in the return leg as Juventus had to sit back for the majority of the match. The Bianconeri have failed to move past the quarter-finals since their finals defeat against Real Madrid in 2017. Dennis Zakaria is unavailable for the return leg due to an injury, while Weston McKennie and Federico Chiesa are sidelined as well. Paulo Dybala and Giorgio Chiellini could be in contention for the match; however, Leonardo Bonucci is doubtful to appear. 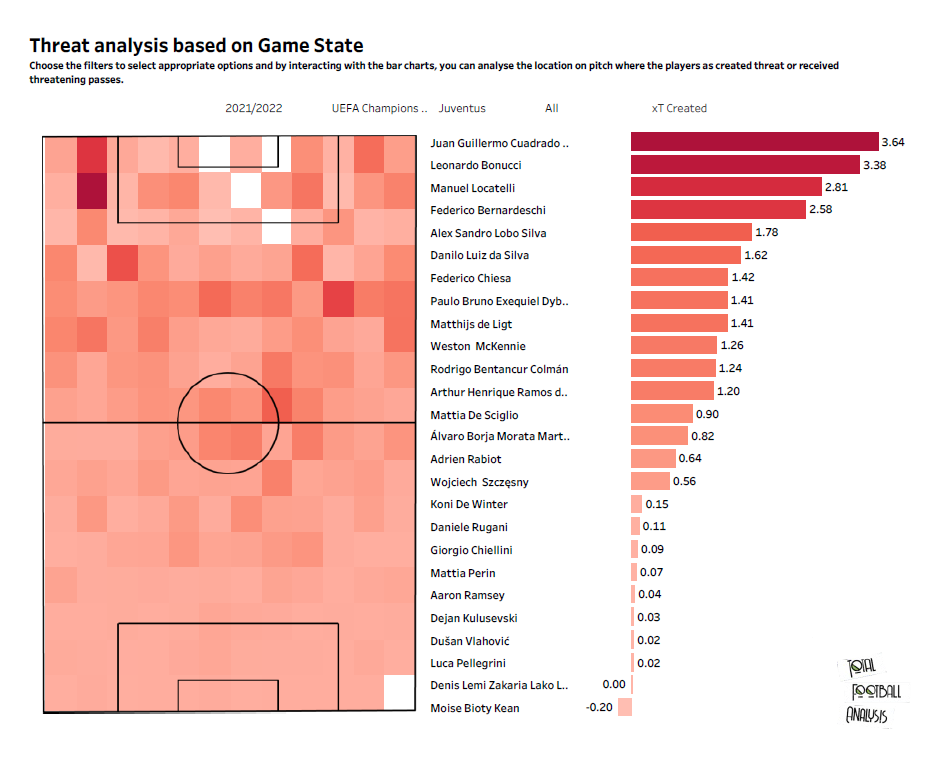 In the above viz, we can see the location on the pitch where Juventus have created threats or received threatening passes. The Old Lady have created a high threat on the left wing near the opposition’s box. Juan Cuadrado has created the highest expected threat for his side. 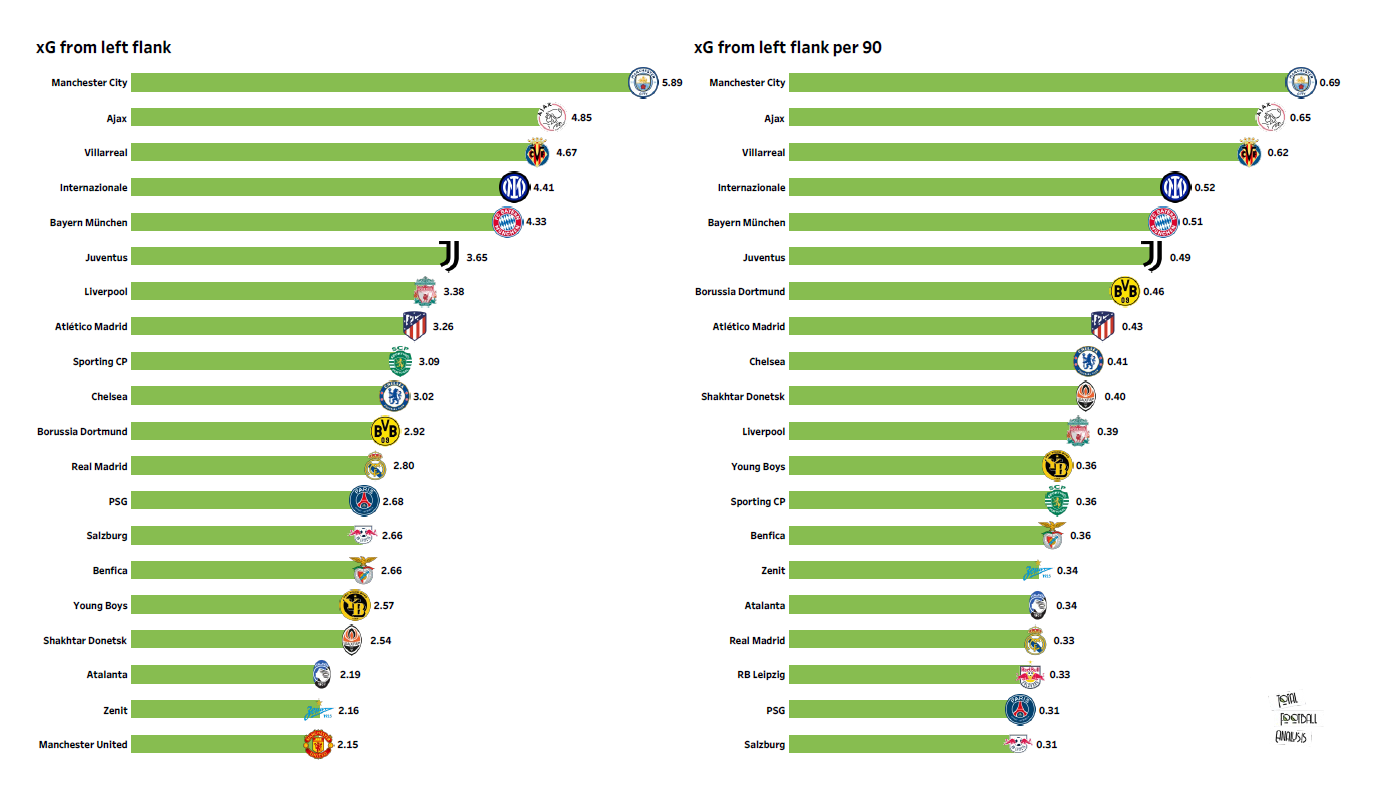 In terms of xG from left flank, Juventus are placed at the sixth spot in the league. They have averaged an xG of 0.49 from the left flank per match.

Heading into the return leg, Villarreal have secured two wins in their previous three matches after the first leg. As a result, they are placed at the seventh spot in LaLiga with 12 wins, nine draws, and seven losses in 28 matches. They secured a narrow 1-0 win against Celta Vigo in the previous week. Dani Parejo’s 64th-minute goal ensured that his side take three points from the match. The Yellow Submarine have progressed to the quarter-finals of the Champions League just twice. With all to play for in the return leg, Villarreal would be hoping for a strong showing in Turin after an impressive performance in the first leg; however, their extensive injury problems could cause problems. Veteran defender, Raul Albiol, was withdrawn at the break against Celta Vigo, however, he remains in contention for the return leg. Alberto Moreno, Paco Alcacer, and Ruben Pena are all unavailable, while Gerard Moreno, Etienne Capoue, and Juan Foyth are doubtful as well. 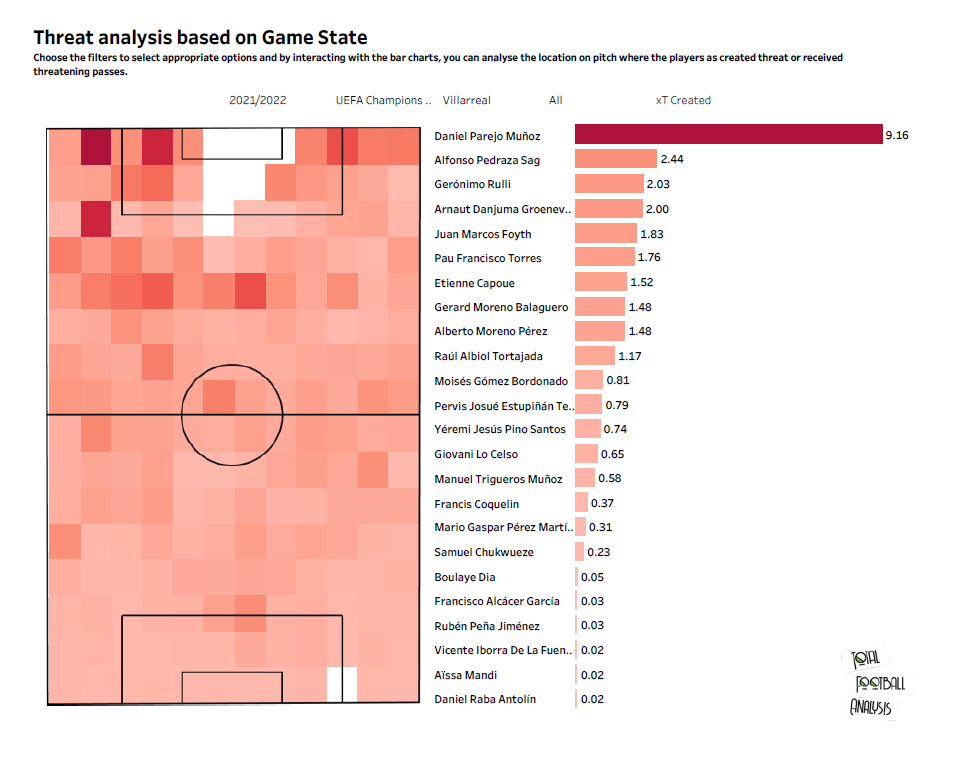 The above viz displays the areas of the pitch where Villarreal have created threats or received threatening passes. We can see that the Yellow Submarine have been threatening on the left wing near the opposition’s box. Dani Parejo leads the chart in terms of xT created for his side. 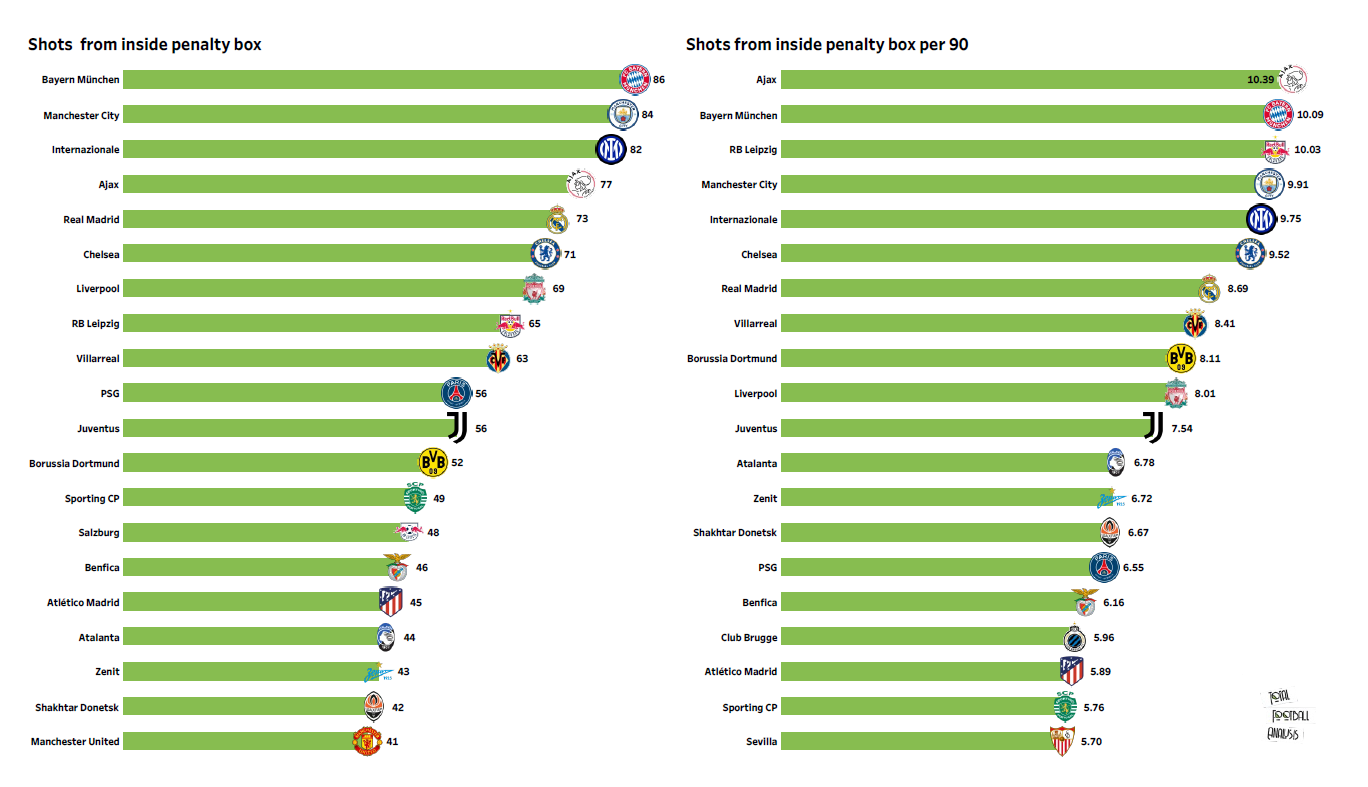 Juventus are strong on paper heading into the match. They should be able to take the win.