Estadio de la Cerámica is the venue for Tuesday’s Champions League Round-of-16 match between Villarreal and Juventus. The home side were runner-ups in Group F while the visitors finished top of Group H. Can the Bianconeri gain an advantage before the return leg at home?

Villarreal head into the first leg of the Round-of-16 on the back of a decent run in LaLiga. They are undefeated in their previous four matches in the league, taking 10 points out of the available 12. As a result, they are placed sixth in the league, with 10 wins, nine draws, and six losses. Although they suffered two defeats against Manchester United, Villarreal progressed to the knockouts on the final day of the group stage, defeating Atalanta 3-2. Two goals from Arnaut Danjuma and one from Etienne Capoue helped seal the Yellow Submarine, a place in the Round-of-16. Danjuma has been in impressive form this season, scoring 12 goals and laying three assists in all competitions. He scored a hat-trick in Villarreal’s recent league win against Granada. Unai Emery would be looking to count on the brilliant form of the Dutch winger in the upcoming match against Juventus. Gerard Moreno is set to remain sidelined for the match, while Francis Coquelin and Ruben Pena also remain out. Samuel Chukwueze, Juan Foyth, and Raul Albiol could make their returns in the starting lineup. 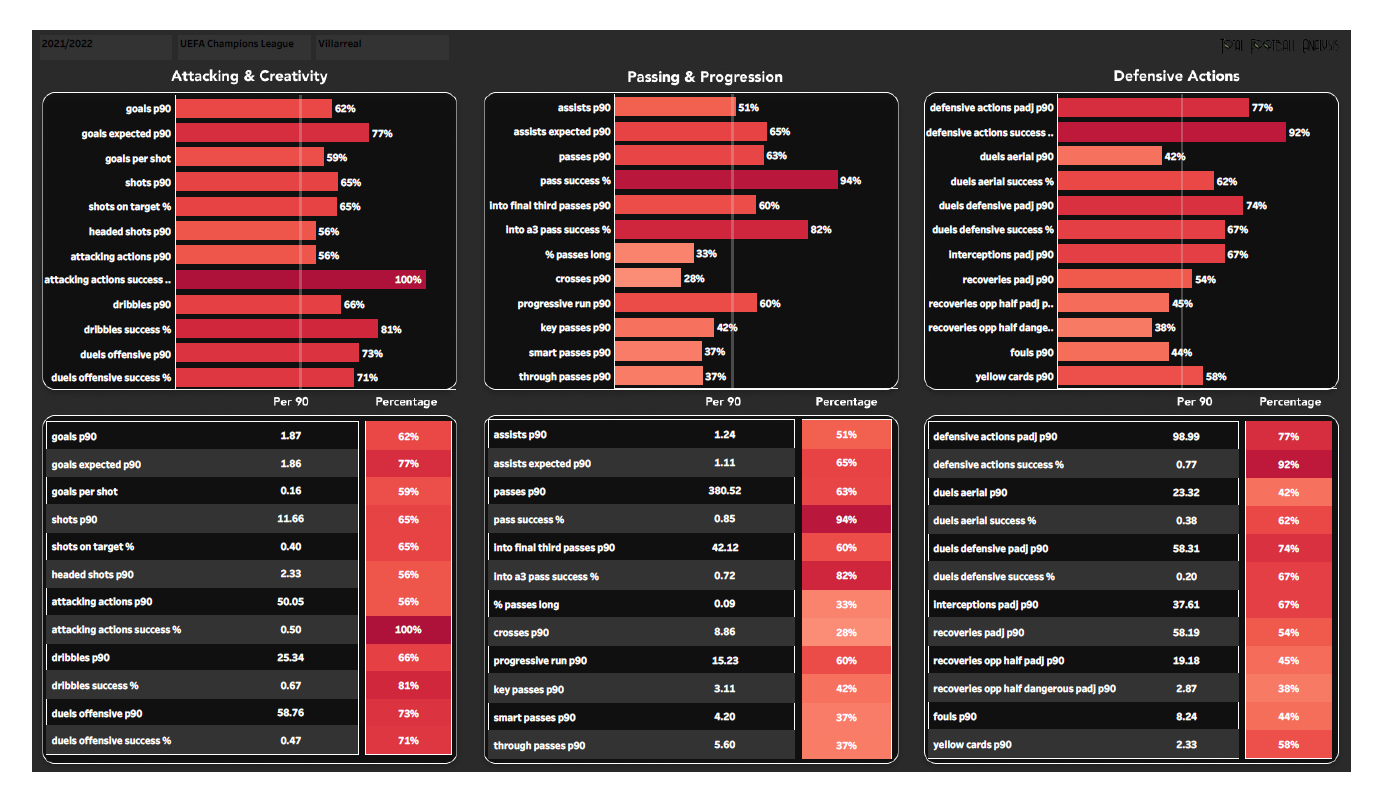 In the above viz., we can see Villarreal’s overall stats in the Champions League this season. They conceded a total of nine goals in six group stage matches while scoring 12. Most of their defensive stats surpass the league median, while their attacking stats have been decent. Unai Emery’s side would be looking to improve upon some of their passing & progression metrics, as they fall behind the league median in terms of average long passes, crosses, key passes, smart passes, and through passes per match. 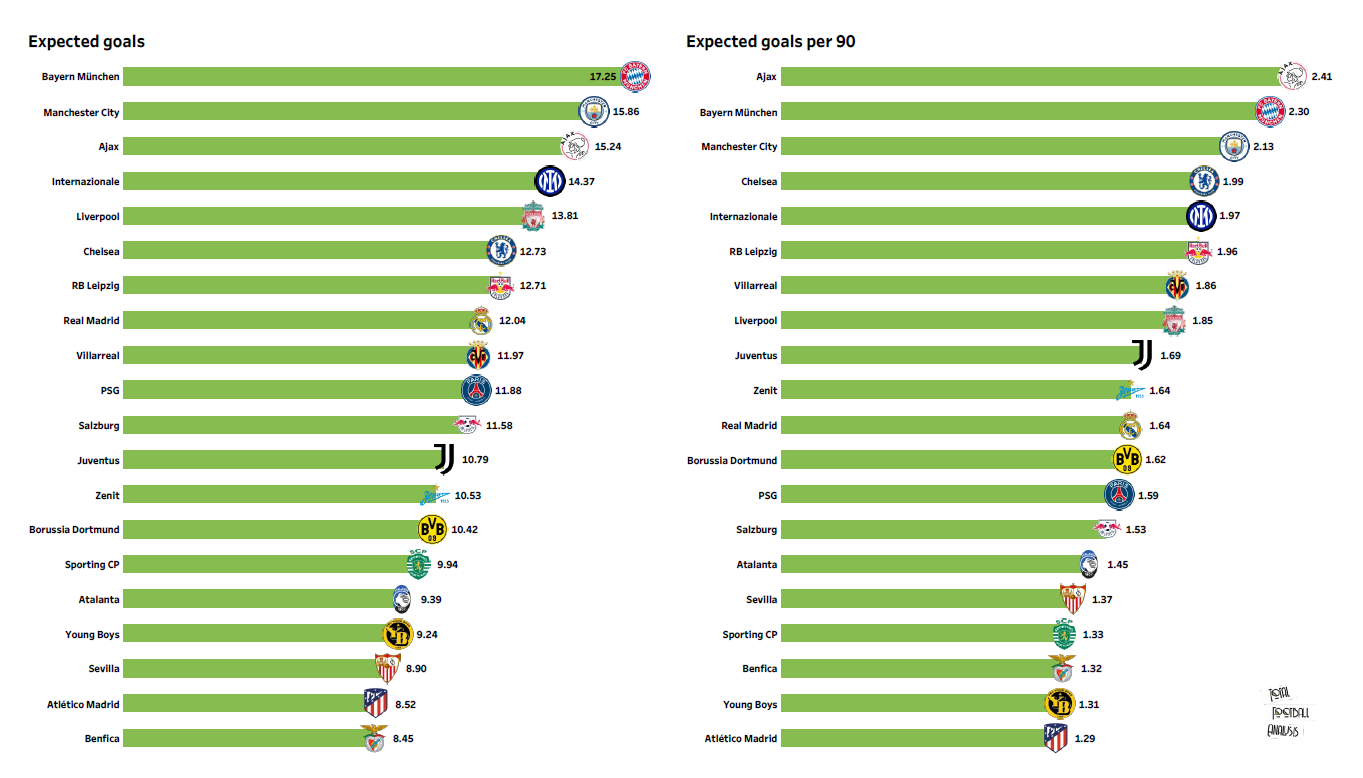 Villarreal have done well in terms of creating quality goal-scoring chances, as indicated by their xG of 11.97. They have created an average xG of 1.86 per match as well.

After a mixed first half of the season, Juventus have started the second half relatively well. They had an impressive transfer window, bringing in the likes of Dusan Vlahovic from Fiorentina and Dennis Zakaria from Borussia Monchengladbach. The Bianconeri have managed to get back into the top four in the league table with 13 wins, eight draws, and five losses. While they did lose 0-4 against the reigning champions Chelsea in the group stages, Juventus eventually finished at the top of Group H, having won five of their total six games. Their recent form in Serie A, however, should be concerning for Allegri as they have managed to secure just two wins in the previous five league games. The Old Lady have failed to progress through the Round-of-16 for the past two seasons, a scenario that Allegri would be hoping to change. Juventus have a string of injuries to contend with as Bonucci, Chiellini, and Chiesa are all sidelined for the match. In addition, Paulo Dybala, Daniele Rugani, and Luca Pellegrini picked up knocks in the recent match against Torino and should remain out. 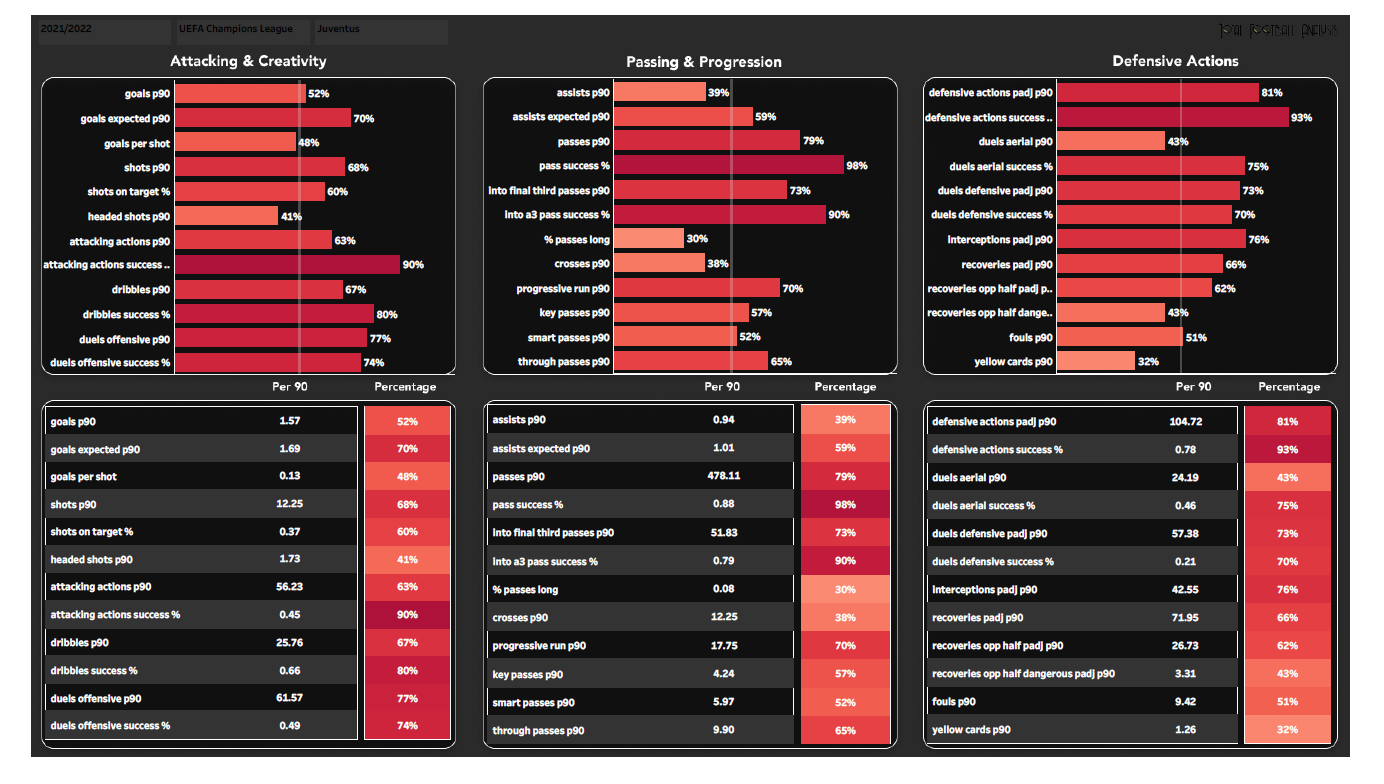 The above viz. displays Juventus’ overall stats in the Champions League. The Old Lady conceded a total of six goals in the group stages and were solid overall, as indicated by their defensive stats as well. In terms of attacking & creativity, Juve’s most notable stats are successful attacking actions and successful dribbles. In addition, they rank highly in terms of passing success rate.

Juventus are placed at the 11th spot in terms of successful dribbles. They average upward of 15 dribbles per match, ranking eleventh in the Champions League.

Although Villarreal are the underdogs going into the match, they have been in better form out of the two sides recently. In addition, the Bianconeri have a string of injuries at the back.