As part of the recent sanctions placed on Chelsea and their owner, the club will not be allowed to renew the contracts of their players for the time being. One Chelsea player who is out of contract and will become a free agent this summer is the German centre-back, Antonio Rudiger. The 29-year-old defender is a target for many clubs, including Real Madrid, Newcastle, PSG, and Manchester United. It was reported back in January that the Bianconeri have joined the host of clubs interested in signing Rudiger.

Following his move to Stamford Bridge in 2017, Rudiger has evolved into one of the best defenders in Europe. He was a prominent part of Chelsea’s Champions League triumph last season. The German international has made 124 appearances in five seasons with Chelsea in the Premier League.

With both Chiellini and Bonucci now in the back-end of their careers, Juventus would soon need to find suitable replacements. One of the highlight themes of Juve’s inconsistent season has been the recurring injuries to their iconic defenders. Both Chiellini and Bonucci have missed out on many crucial matches due to injuries. Now at the age of 37 and 34, respectively, it’s high time that the Old Lady get used to life beyond their stalwart defenders.

Rudiger would be an excellent addition for the Bianconeri, as his dynamic ball-playing technique is matched evenly with his robust defensive tenacity. The 29-year-old is capable of playing in a back-three as well as in a back-four. He would be a brilliant addition to Allegri’s squad if they manage to bring the German international to Turin.

Let’s take a look at some stats to gauge whether Rudiger is a suitable replacement for Bonucci. 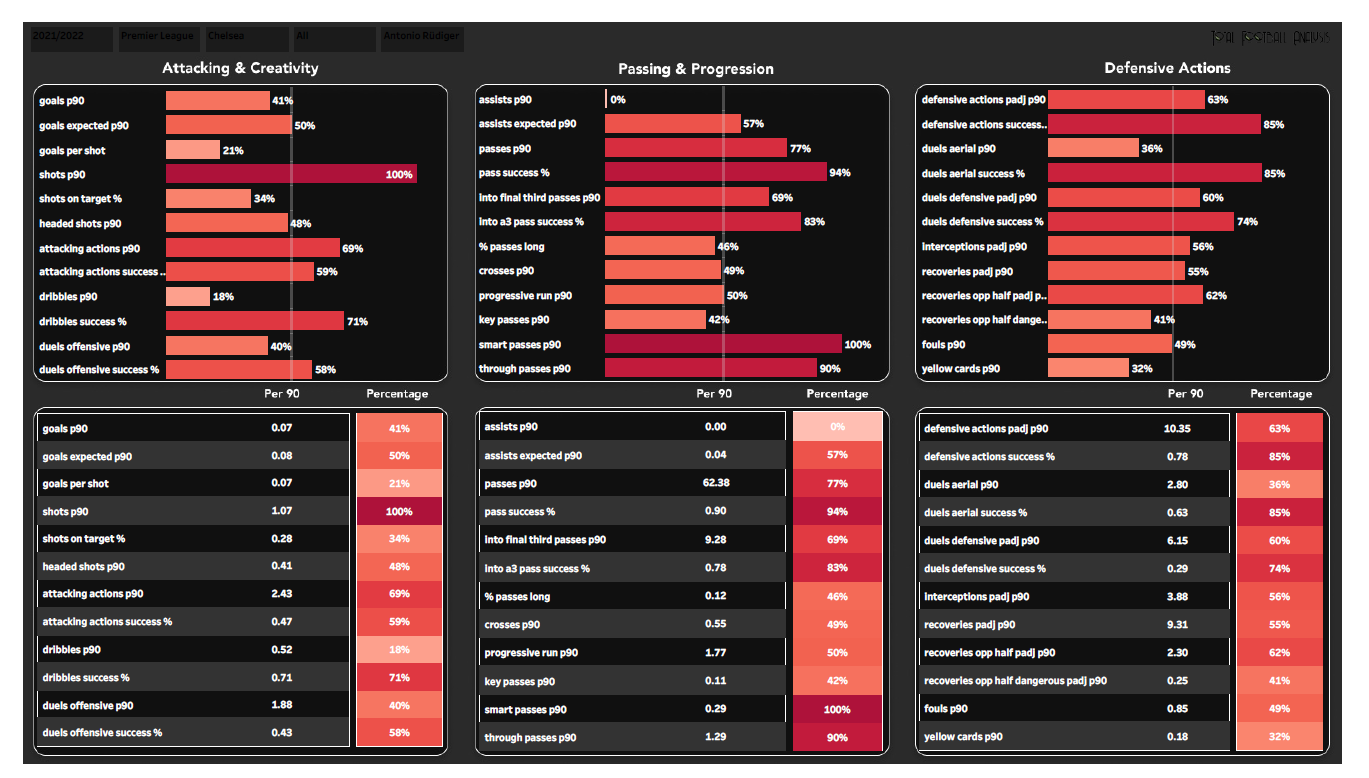 In the above viz., we can see Rudiger’s overall stats in the Premier League this season. The majority of his defensive stats are above the league median, with the most notable stats being defensive action success rate and aerial duels success rate. Rudiger averages 3.88 interceptions, 9.31 recoveries, and 2.30 recoveries in the opponent’s half. The 30-year-old’s passing & progression stats are impressive as he ranks highly in terms of pass success rate, through passes per 90, and smart passes per 90. Under Tuchel, Rudiger’s style of play has become more dynamic, as he is frequently seen darting forward in the opponent’s half during the attacking phases. 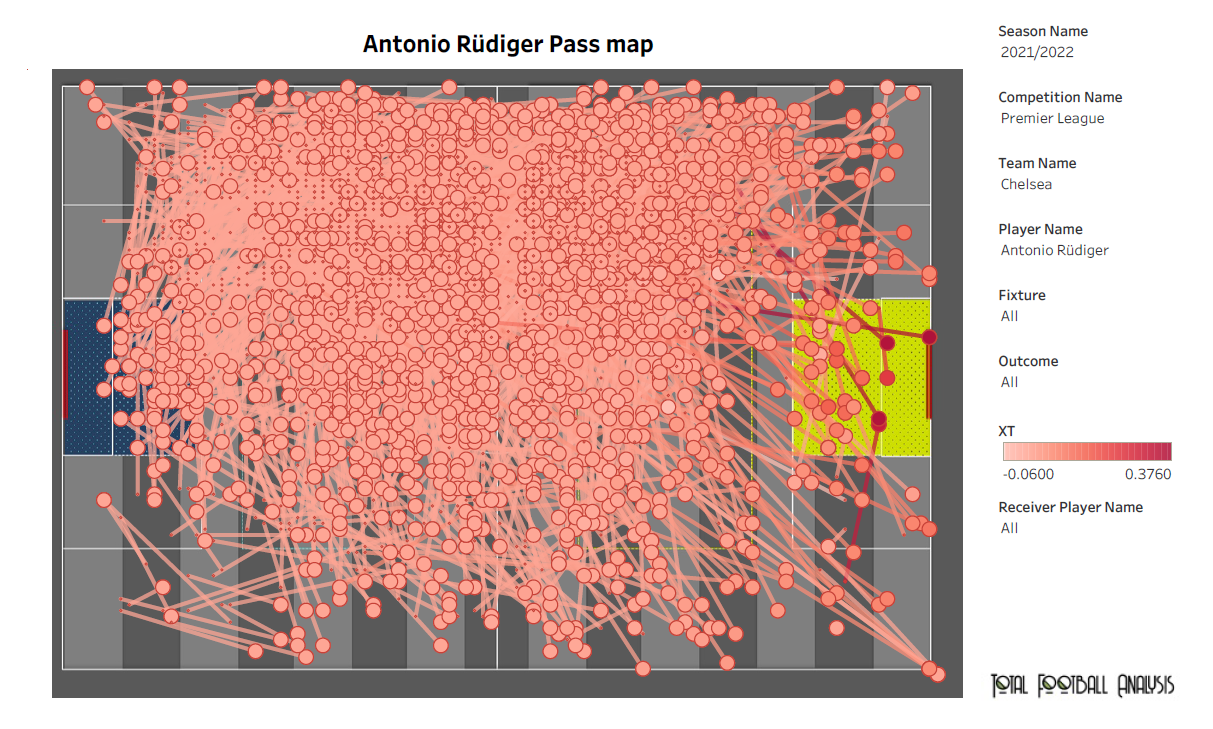 Rudiger’s reading of the game allows him to position himself accurately on the pitch. For a defender, his passing range and ball-carrying ability are impressive. We can see in the above viz. that he has covered almost the entirety of the pitch with his distribution. Rudiger has also delivered multiple threatening passes into the opposition box. In addition, he is capable of picking out his man in different areas of the pitch. Similar to Bonucci, Rudiger plays an important role during the build-up phases, helping his side play out from the back. 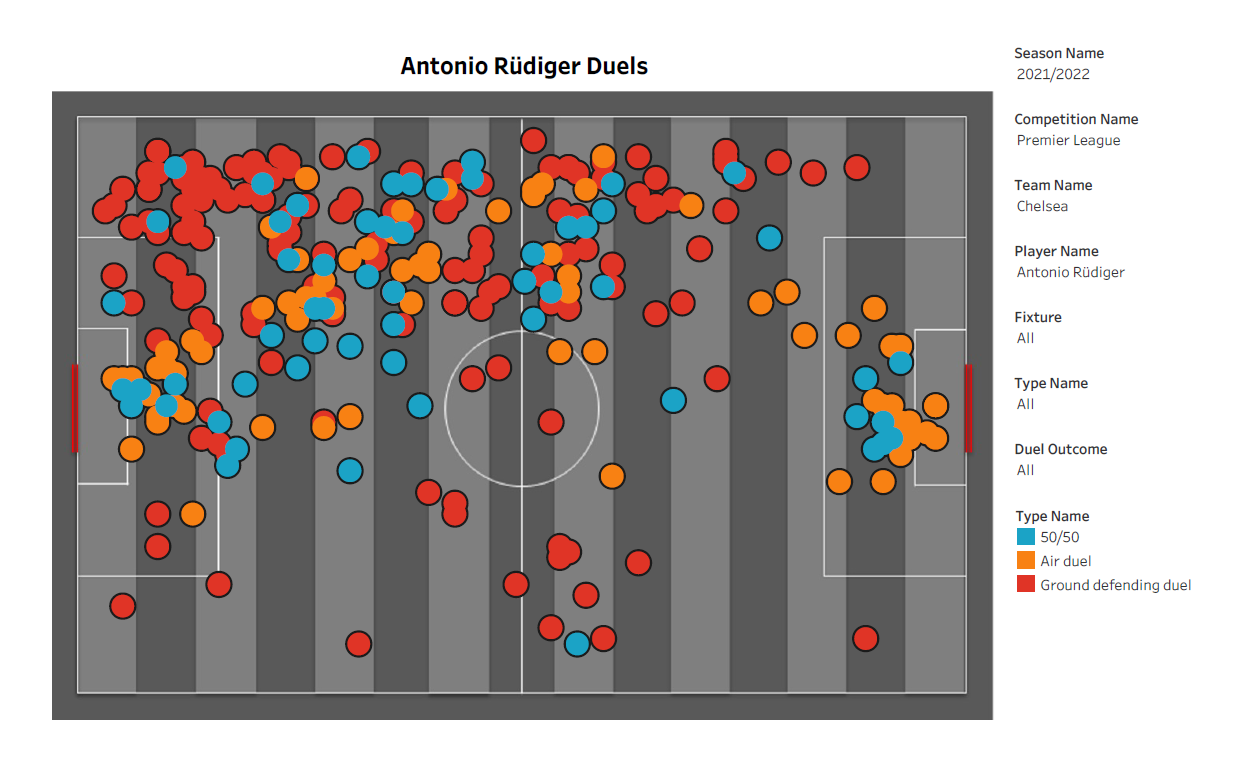 The German international is an imposing presence on the field. He is constantly seen making runs into the opponent’s half and is not afraid to take his chance at the goal. We can see his heavy involvement in defensive and aerial duels in the above viz. Rudiger has engaged heavily in duels in the opponent’s half as well. Although his aerial ability is somewhat lacking for his stature, Rudiger remains a threat during the set-pieces. The 29-year-old maintains a high success rate in his defensive duels.

Based on his stats and style of play, Rudiger would be an excellent replacement for Bonucci. Just as Bonucci, Rudiger’s style of play is based more on positioning and anticipation, and he is capable of making penetrative forward passes. The German international’s experience of playing at the top level would prove to be of massive aid for the Bianconeri if they do manage to bring him to Turin.