For over a decade, Giorgio Chiellini has been a constant feature of Bianconeri’s backline. Since 2005, the veteran defender has won nine Serie A titles and has featured in the starting XI in all of those seasons as well. Now at the back-end of his career, the veteran defender continues to be included in the starting XI whenever he is available. However, he has been struggling with injuries in recent years and is not expected to lead the Old Lady’s backline for a considerable period. Sooner or later, Juventus have to align a suitable replacement for the 37-year-old defender.

AC Milan defender Alessio Romagnoli is one of the players who has been constantly linked with a move to Juventus. Romagnoli, whose contract expires at the end of the season, has not yet renewed his deal with AC Milan and could look for opportunities elsewhere. Juventus have been keeping tabs on Romagnoli for a long time, and with Chiellini nearing retirement and de Ligt’s future in doubt, the requirement for a new defender would become paramount. Many reports have also claimed that Allegri is an admirer of Romagnoli. While the AC Milan defender reportedly prefers a stay at Milan, he is holding out for an improved deal, and the club might be willing to match his expectations.

With the contract situation with AC Milan hitting a stalemate, Juventus could prepare a deal to lure Romagnoli to Turin. Since signing for AC Milan in 2015, Romagnoli has made 192 appearances in the Serie A and has been a prominent feature in the Rossoneri’s backline. Although he struggled with injuries last season and suffered a dip in form, Romagnoli has returned to the starting XI this season, making 14 appearances in Serie A.

Let’s take a look at his stats from the Champions League this season to gauge whether he could possibly replace Chiellini. 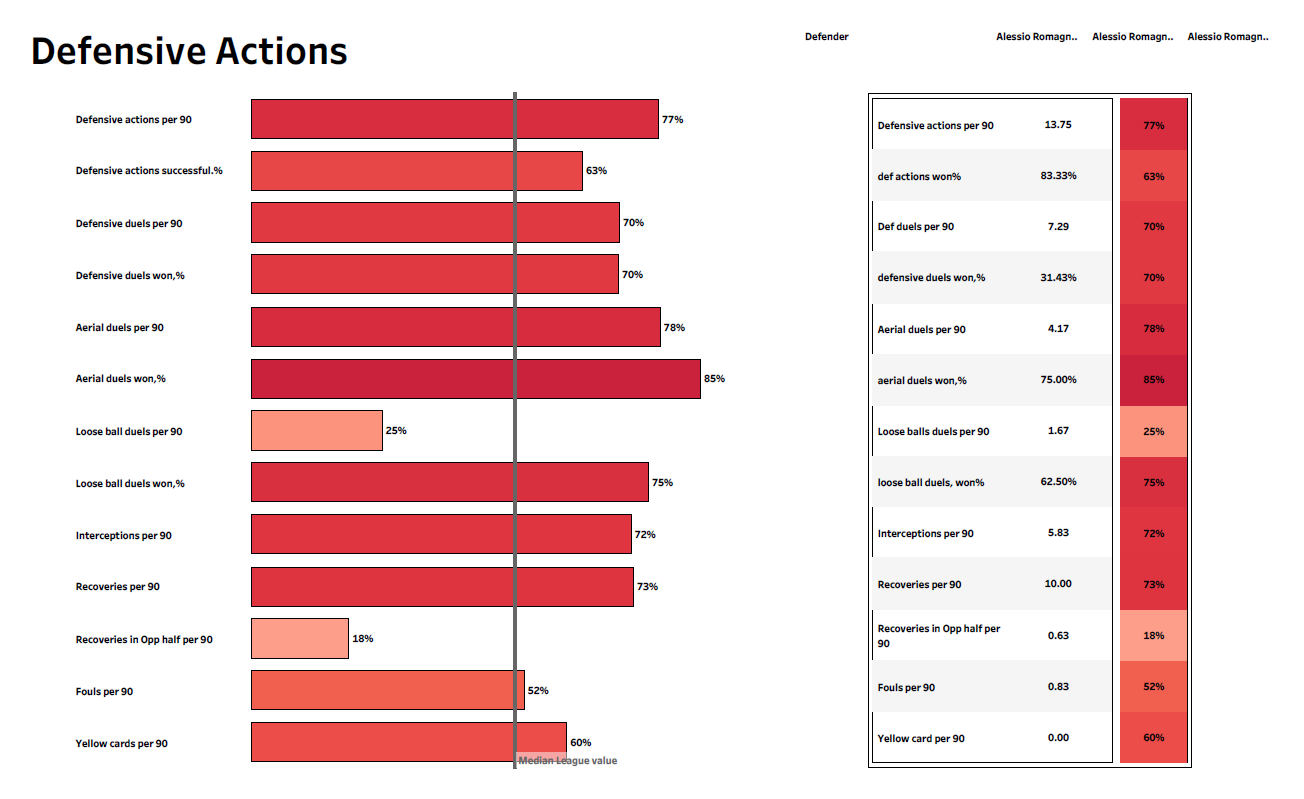 In the above viz., we can see Romagnoli’s defensive stats from his five appearances in the Champions League. The majority of his stats surpass the league median value, with the most notable stats being the aerial duels success rate and defensive actions per 90. Romagnoli possesses impressive ball-playing ability. He is capable of receiving the ball under pressure and can provide his team with an outlet when they are pressed. The defender can bypass the opponent’s press to prevent his side from being counter-pressed. In addition, he contributes heavily in the build-up phases for his side. 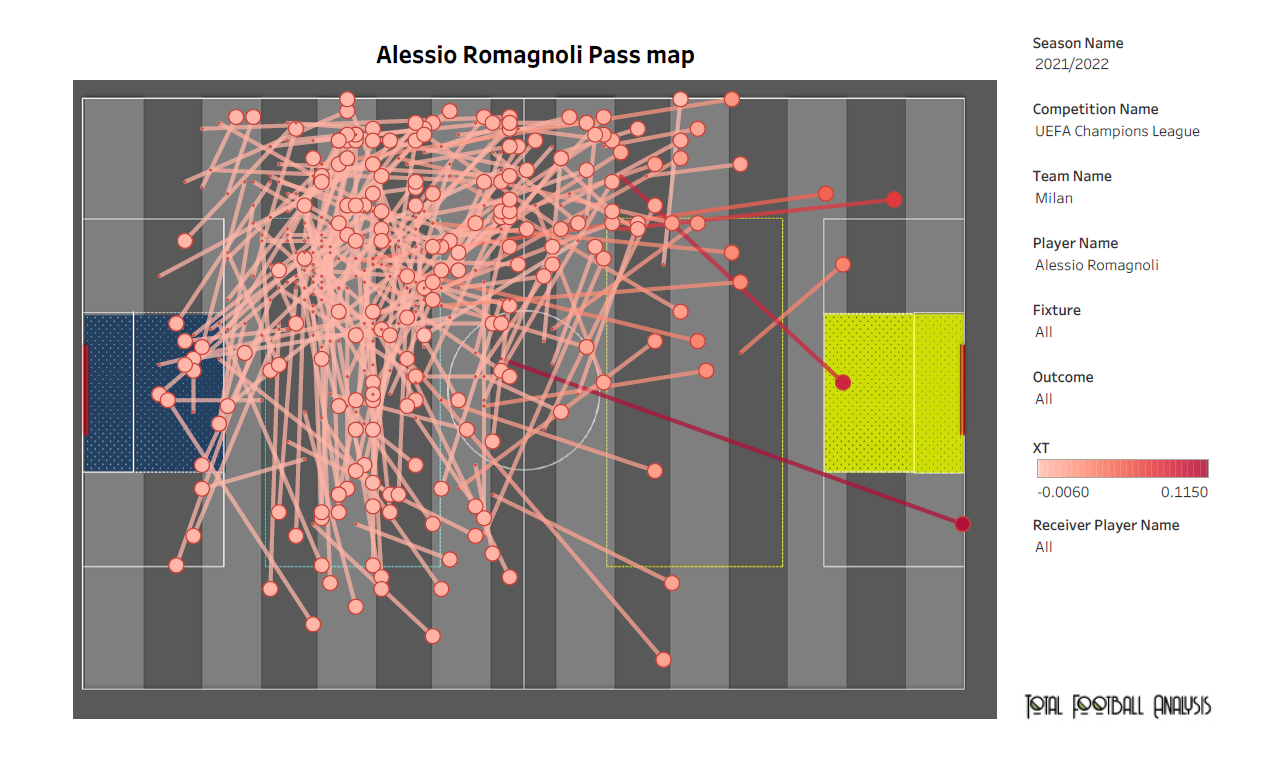 The above pass map displays the areas of the pitch from where Romagnoli has delivered his wide array of passes. Romagnoli is an adept passer of the ball and possesses good accuracy and range with his passing. He is capable of picking out teammates in the opponent’s half as well. In the above map, we can see that he has played multiple diagonal balls into threatening areas of the opponent’s half. Romagnoli possesses impressive touch and decent dribbling skill that allows him to drive forward with the ball and drag the defenders from their position. 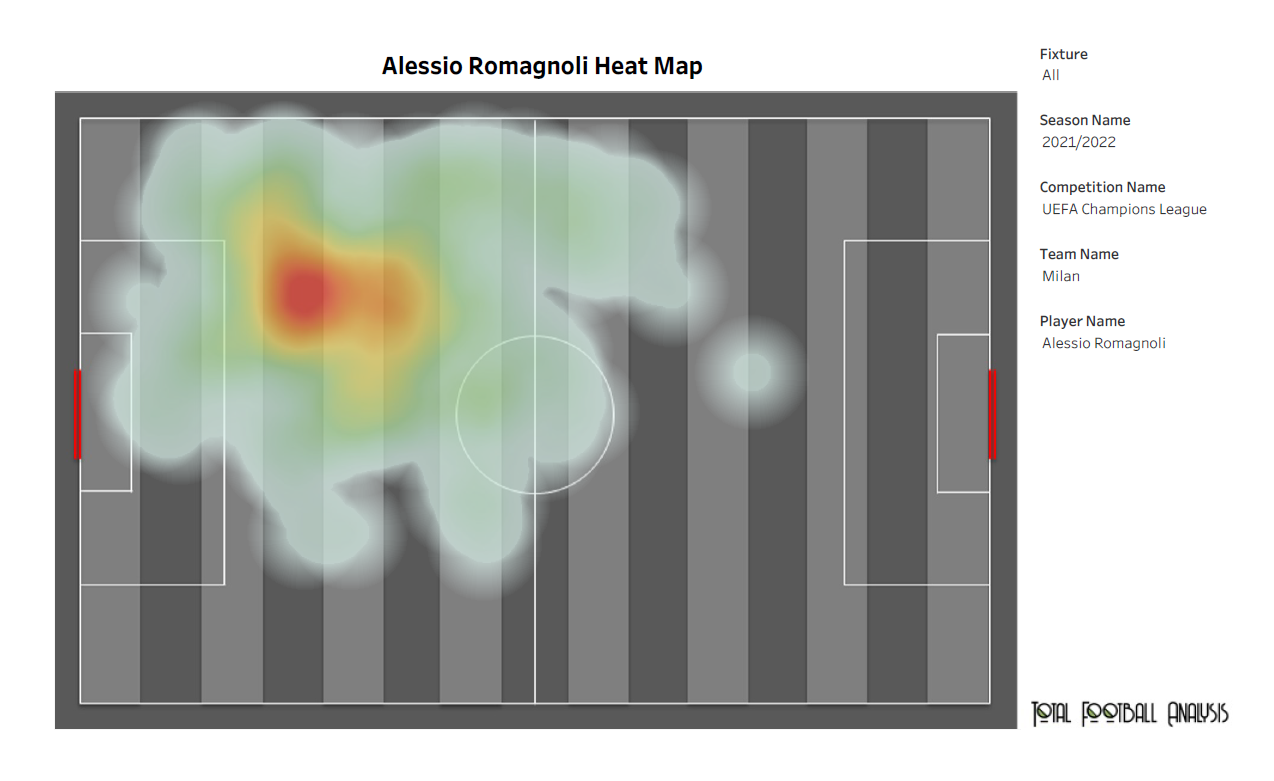 Romagnoli’s heat map indicates the areas of the pitch where he is most active in. In Pioli’s 4-2-3-1 system, Romagnoli is deployed on the left side of the backline as a left-centre-back. The red zones indicate his activity on the left side of Milan’s defense. Romagnoli is an intelligent defender who excels in reading the game. His anticipation and ability to cover spaces are important elements of the game. 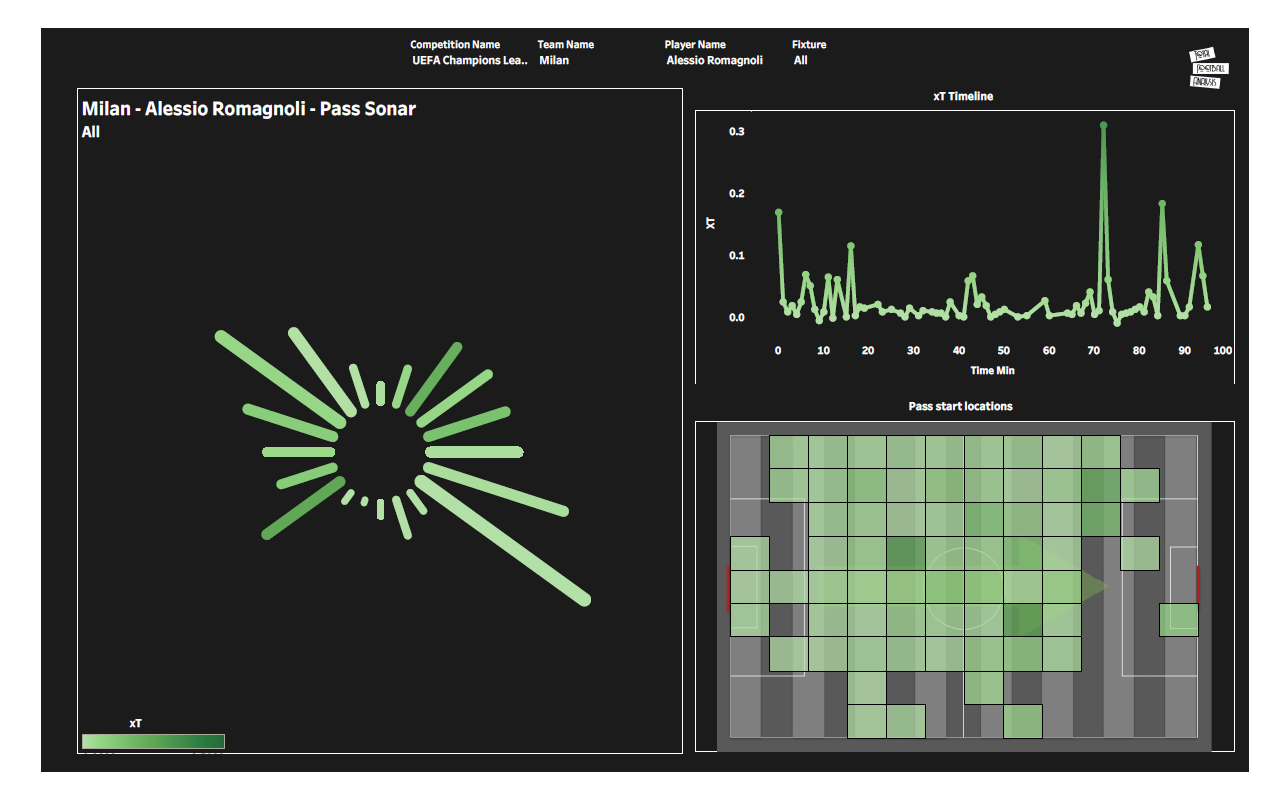 Pass Sonar outlines the direction of pass that a player or a team tends to make and indicates a player’s influence on the movement of the ball. In addition, it shows the frequency distribution of different passing angles for an individual player, as well as the typical length of pass attempts. In the above viz., we can get a sense of Romagnoli’s directionality of passes. In addition, the above viz. also highlights the impressive range of passing that Romagnoli displays.

While still only 27, Romagnoli could carry forward from Chiellini for many years to come. His stats indicate that he can become a potential leader of the Old Lady’s backline.